An Artist who loved Virgin Nature


Most visitors to Room 41 of the National Gallery in London come to see the collection of works by well-known Impressionist painters. The room also contains the only painting by Akseli Gallen-Kallela in the Gallery: a view of Lake Keitele in Finland, the country where the artist was born and lived for much of his life. In an earlier blog post I compared the atmosphere created by this work and by the 5th Symphony of Sibelius [1], both being strongly Nordic. However, while the music of Sibelius is well known, the art of Gallen-Kallela is less familiar to most of us, as music travels more easily than paintings and frescoes, although modern illustrations make copies available widely. As young men, Sibelius and Gallen-Kallela shared a passion for both Nature and Finnish traditions [2] and were part of Symposium, an influential group of young creative artists who met to discuss Finnish national identity at a time when the country was a Grand Duchy of Russia. Their interest focussed on Karelia (a large part of which was ceded to the Soviet Union after the Second World War) and this region had a profound effect on Gallen-Kallela.

I made my first extended visit to Finland in the winter of 1976 and my hostess, knowing perhaps of my interest in paintings, took me to the Gallen-Kallela Museum at Tarvaspää. After leaving the tram stop, we walked across part of a frozen lake and it was so cold that the snow covering the ice was scattered as we walked, forming a glittery haze. There was something magical in that as I had never seen it before so, on arrival at the museum, I was especially receptive to viewing the works on display. I was not disappointed and followed up this visit by looking at as many pictures by this great artist as I could during my stay in Helsinki. Having spent the summers of 1975 and 1976 in the north of Sweden, I developed a love of Nordic wilderness but I was surprised at the powerful connection that I felt to many of Gallen-Kallela's paintings. 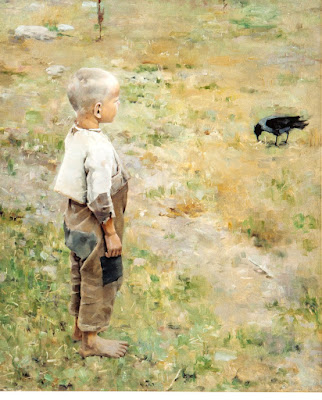 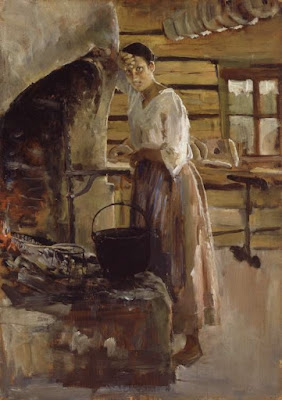 Before becoming a student in Paris, Gallen-Kallela painted a series of pictures of rural life, among the earliest being Boy with a Crow (above, upper), made when the artist was 19 years old. This is one of the paintings that had a big effect on me and it is not difficult to read a story into the simple portrayal of two beings against the ground of an enclosed meadow. There are many other works based on everyday life (e.g. above, lower) and Timo Martin and Douglas Sivén wrote in their splendid celebration of Gallen-Kallela [3]:

In the forests, the landscape of the wilds and in the solitude of the great outdoors Akseli Gallen-Kallela always found peace of mind for a while, and most often he portrayed the wild scenery as softly limpid and melancholy. He made his most joyful notes when work had gone well and his mind was at peace, far from the madding crowd. Born a country boy, Gallen-Kallela throve in the country, in the forests and among the innocent people of his childhood memories, even for long time periods – until his complex, restless nature drew him to the turmoil of cities and to the activities of equally ambitious kindred spirits. His devotion to virgin nature sprang from his childhood, remembered with a warmth that as time passed so gilded those memories that he came to expect life and people in other regions to live up to them.

Romantics can identify readily with these sentiments and, in an attempt to satisfy them, Gallen-Kallela designed a wooden house to be his home in an isolated part of Finland, long before Tarvaspää was built. This house was named Kalela (not Kallela) and the interior decorations, and the furniture, were made by Gallen-Kallela himself using Karelian and National Romantic motifs. He lived here with his wife and young family but it was far from idyllic in any practical way as it was always cold during the winter and Finnish winters are often very cold indeed. However, it brought him close to the natural world throughout the year, although his restlessness saw him make many trips to other countries. His mature style changed to be more Symbolist and, in addition to oil painting, he painted in tempera, made wood cuts and etchings and created pieces of stained glass.

On one of his visits to Italy, he learned about fresco techniques and devoted years to making frescoes in Finland and in the Finnish Pavilion in the 1900 Paris World Exhibition. Very few of these works have survived: they featured subjects connected with Kalevela, the Finnish "national legends" based on Karelian folk tales that were also an important source for many paintings. However, it is the landscapes and informal portraits by Gallen-Kallela that I appreciate most. It's one Romantic speaking to another, sharing a similar taste for melancholy and Nature. 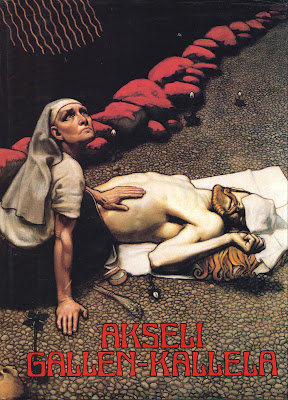 
Edward Forbes F.R.S., the eminent Victorian, was approached by a Dr Drew of Southampton for his views on the teaching of Natural History. In his letter of reply, dated 27th December 1852, Forbes writes [1]:

The question is one to which a satisfactory answer cannot readily be given. It is one over which I have often pondered with much anxiety, believing that the study of Natural History will sooner or later become general in this country, and be accepted as a necessary branch of general education. Some accurate and systematic knowledge of the natural productions of our planet, and of its geological structure and history, should surely be possessed by every well-educated person, and ought to be taught to youths of all classes. Moreover, there can scarcely be a better, certainly not a more engaging exercise for the logical faculties than the practice of Natural History observation, and the distinguishing and defining of affinities and analogies.

Forbes goes on to list the modes of teaching - by lectures, instruction in small classes, and by the use of museums of preserved material - and how these might be structured. He also mentions the need for field visits and the importance of having the best teachers:

The mere 'popular lecturer' is too often a man [this being a time when lecturing was a male occupation] who gets up a subject with which he has little or no practical acquaintance. However pleasing his discourse may sound to the ear, it makes but little impression on the mind of his hearers. The more eminent the lecturer (as an original investigator), provided always that he has the gift of telling his story clearly and fluently, the more permanently interested will his audience be.

The latter is the ideal, of course, but not all teachers have the qualities of Edward Forbes.

Do Forbes' comments about the importance of Natural History, expressed in the first quotation above, have relevance today. They certainly apply to Geology, but Modern Biology, with its focus on genetics and molecules, has become allied to Medicine. As a result, there are more funds, and job opportunities, in Biomedicine than in other branches of Biology.

If training students for professions is considered the most important role of schools, colleges and universities, teaching Natural History as a subject is a non-starter. Yet the same could also be said of teaching Classics, Philosophy, History and similar disciplines that provide a useful training in ways of thinking, means of tackling problems, or for developing a suite of transferable skills. Viewed in this light, what would someone gain from the contemporary study of Natural History?

(2) Individual organisms vary in their appearance and behaviour. All Natural Historians know of this individuality, although there are considerable similarities within a species and considerable differences between species.

(3) The diversity of living organisms, and the way that they have evolved to adapt to different environmental conditions, is awe-inspiring. First-hand observations of individuals and their adaptations, devoid of anthropomorphic interpretations, show what is possible through evolution, yet we rarely make such observations. Much of our information on Natural History comes from TV screens, VDUs and other media, so that we share the observations of others and this has an effect on the way we question what we see, if we question it at all.

(4) In an age of relentless anthropocentricity, Natural Historians provide a counterpoint and a more holistic approach to the World, with an understanding of the relationships between life, death, decomposition, waste products and food..

Many other advantages of a training in Natural History can be put forward, but surely the ways of thinking outlined above are of value in all jobs and careers? Why don't we follow the advice of Edward Forbes and teach Natural History as a subject in schools, colleges and universities?