I attended Winner Street Baptist Church in Paignton, Devon as a child. It attracted families and there were often three generations present on Sunday mornings when the service included hymns, prayers, announcements and a short sermon that was more comforting than challenging. I wasn't conscious of much questioning, or even discussion, of the topics raised.

As would be expected, Heaven and Hell were mentioned frequently and it was made clear to us that going to the former resulted from being good and to the latter from being sinful. As to locations, I imagined that Hell was somewhere deep in the Earth because of all the fire and brimstone that characterised the place: Heaven, on the other hand, must be above the Earth, but I didn't know where. I learned that, after death, the soul left on its journey to Heaven (at least one person in the Winner Street congregation told me it was possible to see this) and no-one wanted to contemplate going to Hell. As I grew older, and began to question my religious beliefs, I began to wonder where Heaven might be.

If I now ask "Where is Heaven?", I am influenced by two sources, art and literature and, especially, The Holy Bible. Paintings show Heaven to be in close proximity to the surface of the Earth and images provide us with the reassurance that the souls of those who die, especially our loved ones, are not far away from us. It also means that Heaven and Earth can be represented on one canvas: 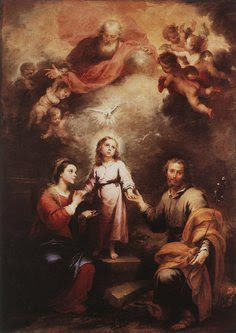 What does The Holy Bible say about the location of Heaven? A search of the Authorised Version of the King James' Bible reveals that there are 691 mentions of "heaven" (in all its meanings) [1], so, for a literalist interpretation of Heaven, as described in Genesis, I turned to The Bible, Genesis and Geology [2]. An illustration from their website is shown below and this has the arrangement of the three Heavens, with the final one (where souls reside?) beyond the waters above the firmament and, presumably, in a specific location. Although the diagram is drawn as a series of linear strata, it is based on a geocentric view, pertaining at the time The Holy Bible was written and remaining unchanged for over a thousand years. Some literalists may still believe in it. 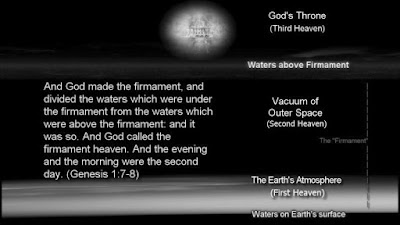 The mediaeval view of Heaven is expressed by Dante in The Divine Comedy [3]. Dante maintains the geocentric approach and uses ideas relevant at the time, like those of Pseudo-Dionysius the Areopagite on the hierarchy of angels, and melds them into a highly influential work. Many readers of Paradiso must have been convinced that Dante's description was based on a revelation of the true nature of Heaven. It differs from the literal Biblical account and is a good example of embellishment - an excellent summary diagram of Dante's view is given in the Oxford World's Classics edition of The Divine Comedy [3]: 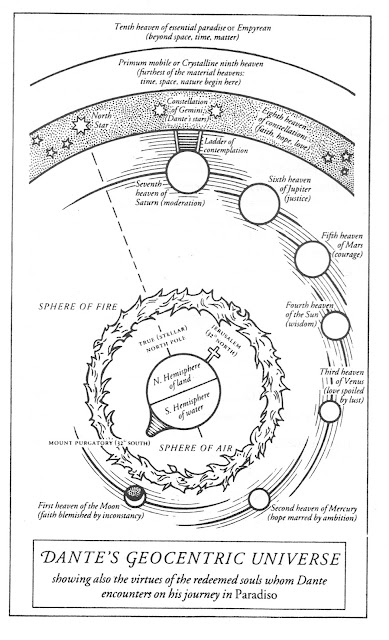 In 1543, Copernicus proposed the heliocentric view of the Universe that better explained our observations and this is the view that we have today. We now know that our solar system occurs within a galaxy and that the expanding universe contains myriads of galaxies all within a void, about which we know very little indeed. It is assumed to contain dark matter and dark energy, both of which are theoretical constructs, and there are areas of modern cosmology that seem like metaphysics to those of us that don't have a sufficient level of understanding, or acceptance. What can certainly be said is that, if we take the literal interpretation of The Holy Bible, souls have a very long journey to Heaven, if it is outside the expanding Universe [4].

Given that the Christian religion centres on the fate of one's soul, the position of Heaven is important to those with an enquiring mind.  Where is it? Is there any evidence that it exists, other than through religious faith?

I was brought up in Torbay and enjoyed walking along the (then) quiet lanes of South Devon, often venturing up on to Dartmoor. Holne, near Buckfastleigh, was on one of my routes and I didn't know at the time that Charles Kingsley had lived there for the first few weeks of his life. 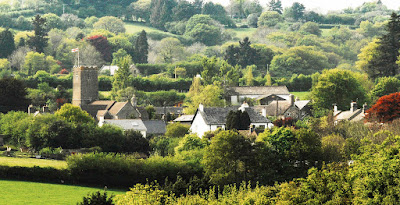 Charles Kingsley's father, also called Charles, inherited money as a young man and set himself up as a country gentleman in Hampshire, spending his time hunting and shooting. Unfortunately, the money didn't last long and Kingsley Senior then had to find a job, choosing to become a curate in the Church of England. It was while he held a position at Holne that Charles was born and the child was destined to develop an interest in Natural History, especially under the influence of his mother. Susan Chitty describes her love of the countryside [1]:

..So great was Mrs Kingsley's passion for the Devonshire landscape, that she walked about it constantly during her pregnancy, hoping to communicate her love to her unborn child.

Charles did not have strong religious beliefs as a youth and, while an undergraduate at Cambridge, enjoyed rowing, smoking, and all aspects of what he referred to as "manliness"; including shooting and riding to hounds, passions that were so important to his father. This liking for the macho stayed with him and he was openly passionate for most of his life, both in public and private.

While visiting his father at the Rectory in Checkenden, Oxfordshire, Charles met Frances Grenfell, one of four daughters of the late Pascoe Grenfell, who lived in a large house nearby. Frances, known as Fanny, was to become the love of his life, although members of her family were not impressed with him. It was through Fanny that he developed his religious faith and, with her support, he determined to become a priest. After they married, Charles was appointed the Rector of Eversley in Hampshire, a living that he held for decades. 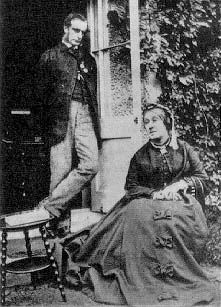 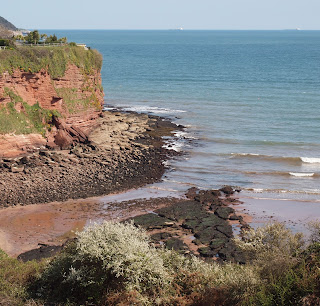 Throughout their lives, Charles and Fanny suffered various illnesses that required periods of convalescence, this being especially so for Fanny who, in 1854, stayed in Torquay for months. Charles joined her there, leaving Eversley in the hands of others, and it was while on this visit that he collected the marine specimens described in his book Glaucus [2] that also contains his views on Natural Historians:

..there are those who regard it [Natural History] as a mere amusement, and that as a somewhat effeminate one; and think that it can at best help to while away a leisure hour harmlessly, and perhaps usefully, as a substitute for coarser sports, or for the reading of novels. Those, however, who have followed it out, especially on the sea-shore, know better. They can tell from experience, that over and above its accessory charms of pure sea-breezes, and wild rambles by cliff and loch, the study itself has had a weighty effect upon their hearts and spirits..

..Let no one think that.. ..Natural History is a pursuit fitted only for effeminate and pedantic men. I should say, rather, that the qualifications required for a perfect naturalist are as many and as lofty as were required.. ..for the perfect knight-errant of the Middle Ages: for (to sketch an ideal, of which I am happy to say our race now affords many a fair realization) our perfect naturalist should be strong in body; able to haul a dredge, climb a rock, turn a boulder, walk all day, uncertain where he shall eat or rest; ready to face sun and rain, wind and frost, and to eat or drink thankfully anything, however coarse or meagre; he should know how to swim for his life, to pull an oar, sail a boat, and ride the first horse which comes to hand; and, finally, he should be a thoroughly good shot, and a skilful fisherman; and if he go far abroad, be able on occasion to fight for his life..

..he must be of a reverent turn of mind also; not rashly discrediting any reports, however vague and fragmentary; giving man credit always for some germ of truth, and giving Nature credit for an inexhaustible fertility and variety; which will keep him his life long always reverent, yet never superstitious; wondering at the commonest, but not surprised by the most strange; free from the idols of size and sensuous loveliness; able to see grandeur in the minutest objects, beauty, in the most ungainly; estimating each thing not carnally, as the vulgar do, by its size or its pleasantness to the senses, but spiritually, by the amount of Divine thought revealed to Man therein..

..And last, but not least, the perfect naturalist should have in him the very essence of true chivalry, namely, self-devotion; the desire to advance, not himself and his own fame or wealth, but knowledge and mankind. He should have this great virtue; and in spite of many shortcomings (for what man is there who liveth and sinneth not?), naturalists as a class have it to a degree which makes them stand out most honourably in the midst of a self-seeking and mammonite generation, inclined to value everything by its money price, its private utility..

..men for the most part of manful heads, and yet of childlike hearts..

As a contemporary Natural Historian, how do I match up to Kingsley's ideal? I cannot agree with his view that "manliness" is required and, interestingly, collecting on the shore (his main focus in Glaucus) was a hobby shared by both men and women in the Nineteenth Century [3]. His macho approach extended to the "Muscular Christianity" that he espoused during his early adult years, raising awareness of the suffering of those in poor areas of cities, and his vigorous campaigning for the less fortunate tailed off after he became an Establishment figure [1]. Maybe his interest in Natural History became more reflective as he grew older? Perhaps he favoured the macho stance when younger, as he felt he had to prove himself, not least to members of the Grenfell family? Or was it to overcome feelings of inadequacy brought on by his pronounced stutter?

What else of the description in Glaucus? Certainly, Natural History inspires awe and I join Kingsley in that, although his explanations of the wonders of the natural world centred on God's design, whereas mine are based on the combination of time and mutation. We know that Kingsley supported Darwin's ideas [4], but he still believed the evolution of species to be part of God's plan, rather than the result of an extraordinary number of chance events.

Of the rest, there is no doubt that Natural History brings an awareness that there is so much that we do not understand. This results in a childlike curiosity, and critical questioning of everything around us, that counters the "mammonite" approach that dominates many people's thinking today, just as it did in the Nineteenth Century. Natural Historians are likely to take a less anthropocentric, and less materialistic, view than most and this informs their decisions. Were he alive today, the young Kingsley would have been a campaigner on environmental matters and I'm sure that he would be a force for good; as long as he constrained his macho approach and didn't again become absorbed by the Establishment.


[1] Susan Chitty (1974) The Beast and the Monk: A Life of Charles Kingsley. London, Hodder and Stoughton.