Many arguments can be put forward against the continued existence of Public Schools in the UK, especially their encouragement of a sense of entitlement. Having said that, the facilities that the top schools provide are often excellent and so is the standard of teaching. Many schools also select students for their academic ability and this results in classes where there is a strong sense of curiosity, contributing to a good atmosphere for learning.

I have given talks in Public Schools and among the most memorable was a visit to Winchester College. The Times had taken up an article that I had written about The Great Plagues of Egypt [1,2] and I was asked to give a lecture on the subject. Not only that, I was also entertained to dinner by the scholars (an elite, elite group) and conversation was wide-ranging and interesting. Earlier, I noticed that there was a display outside the lecture theatre and this consisted of a description of the platypus genome that had just been published in the journal Nature and there was also a stuffed platypus and much general information about the animal. All very impressive, given that the paper was so recent and one felt that the students of Biology were lucky to have this stimulating input.

The most impressive example of the good fortune that students in the major Public Schools receive comes from a school that I have not visited, but which has an excellent website. The web page for Biology at Sevenoaks School [3] gives a brief description of teaching in the subject and ends with this quote from Robert Preston:

In Biology, nothing is clear, everything is too complicated, everything is a mess, and just when you think you understand something, you peel off a layer and find deeper complications beneath. Nature is anything but simple.

It comes from Preston’s book The Hot Zone, The Terrifying True Story of the Origins of the Ebola Virus and his sentiments have a wide application in Biology. In my own research, I rapidly became aware that the more I found out about life in water the less I understood how aquatic ecosystems worked. I gave up practical research, as there were far too many questions and I ceased to have the energy, or ability, to pursue them. That was not depressing, but liberating, as I could then read widely and venture into other fields, while retaining a sense of wonder about Nature, something that all students of Biology develop. For some, this wonder finds an answer in religious beliefs; for others in a deep respect for the world around us and thus a sense that humans are just a small part of something much bigger. 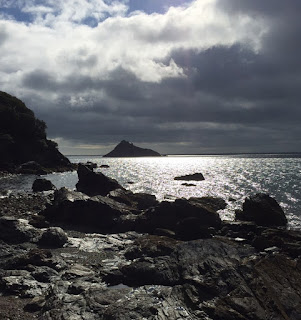 I’m sure that Biology students at Sevenoaks School, in addition to achieving excellent results in examinations (that we all know are important), will leave with a much broader understanding than the content of a syllabus provides. Whether they become lawyers, bankers, politicians, etc., their sense of wonder when thinking about the natural world will be invaluable in the roles they play in planning for the future. Do all schools encourage this approach?

[3] https://www.sevenoaksschool.org/academic/our-subjects/experimental-sciences/biology/
Posted by Roger at 06:48 No comments: 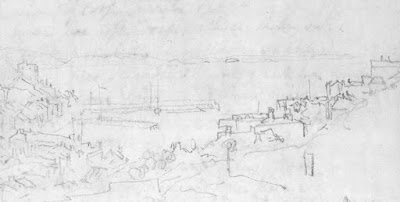 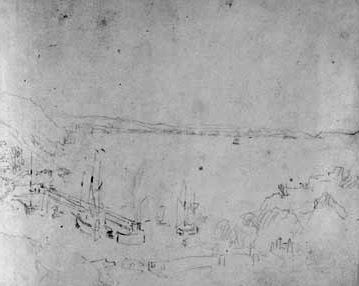 The great artist J.M.W.Turner travelled widely throughout Great Britain, making sketches as he went. Two pages from his notebook of 1811 show Brixham harbour on the southern coast of Torbay, with its two piers and a number of boats, for this was a busy fishing port (see above). It was a time when the northern shores of Torbay were becoming fashionable, leading to the construction of many villas in Torquay in the middle of the nineteenth century. New residents were reminded of the French Riviera, enjoyed the favourable climate that was thought to be good for the health, and many were fascinated by the Natural History of the shoreline.

The little town of Brixham, pretty as it appears when viewed from Torquay, is but a sordid affair when you see it at hand. The lower town particularly is close, mean, and dirty; indeed, truth to tell, I saw refinements in filth here, which I had never the fortune to see paralleled in all my wanderings..

..The scenery on either hand, when once clear of the harbour, is bold and magnificent. The coast is rocky and precipitous, (the town itself appears strangely stuck upon precipices, reaching from top to bottom) and is indented with little coves, the most picturesque imaginable. Berry Head, a noble promontory of compact limestone, rears its lofty head abruptly out of the sea not far from the town, and forms a commanding boundary of the prospect, conspicuous all around..

..I did not obtain much in the way of natural history on the shore, except what I was already familiar with at Petit Tor [his favourite collecting spot north of Torbay]..

..I came home with little desire to see Brixham again.

Not kind words. It was the busy fishing harbour and the surrounding cottages that appalled Gosse and one surmises that he was complaining about the remains of fish and a lack of regard for surroundings that characterised fishing villages of the time. They were not genteel. In addition, decomposition of anything marine produces a very strong smell and that must also have affected his senses 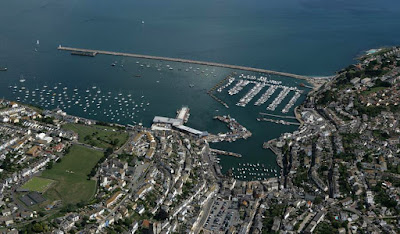 Brixham is very different now. The two piers that Turner drew are still in place (see above), but the outer pier has been extended. Beyond that on the western shore is the modern fish market complex and to the east the breakwater that was begun after Turner’s time and completed in the early 20th Century. Also noticeable is the marina and that has promoted marinafication – an influx of wealth also found in other local ports, such as Salcombe and Dartmouth. Brixham seems “on the up” and I’m sure that Gosse would not find it as unpleasant should he visit today, although he may have something to say about the tourist attractions and tourist shops that also bring money into the town.

As to Natural History, visitors and residents like to see seals and occasional cetaceans, but there is a lack of awareness of most marine life. That is also quite a contrast to earlier times.