Nature and identity: the links between a painting and a symphony


I spent the summers of 1977 through 1980 at Lammi Biological Station, on the northern shore of Pääjärvi. The tranquillity of the lake on summer evenings, and the wonderful quality of the light, left a strong impression on me. However, a ten-week stay at Lammi from January until March 1980 showed a contrasting Pääjärvi, covered with thick ice and with short days and very cold temperatures. Although having a different kind of beauty, the lake and surroundings were now sombre and threatening – quite the opposite of a few months before. 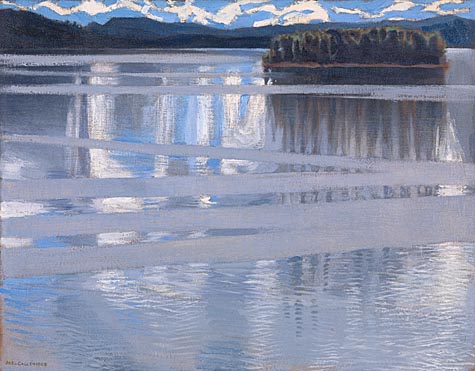 During my visits to Finland, I became interested in the paintings of Akseli Gallen-Kallela and one of his works, Lake Keitele (from 1905, his third version of this subject, seen above) is now in the National Gallery in London. It shows the lake in late summer, with the threat of severe conditions to come, and the surface beginning to freeze in places (for comparison, see the photograph of Lake Keitele by Jukka Kovanen, reproduced below). The painting has a beautiful stillness, focussing on the water and the impending change from calm and warm to hostile and threatening. The mysterious island will then cease to be isolated by water and it will be possible to travel to it over the ice, as the lake changes from being a waterway into a roadway.

While we can all appreciate the natural beauty shown in the painting, and the threat of impending hard times, there is something else in this picture for me and that is a strong sense of Finnish identity. At the time it was painted, Finland was part of Russia and only declared independence from Soviet Russia in 1917. Gallen-Kallela, like many Finns, was proud of the country’s beautiful, watery landscapes  and of the national heritage, represented by the epic Kalevala. He is perhaps best known for his illustrations of scenes from this work, based on Finnish folklore. Gallen-Kallela shared this feeling of Finnish identity, and love of the Kalevala, with another great artist, the composer Jean Sibelius. They had known each other for many years and drank together as members of the Symposion in the 1890s, enjoying long sessions of heavy drinking, while reflecting on “fundamental questions of art”. 1 They remained friends, and drinking companions, for years after these Symposion sessions.

For me, one work by Sibelius forms a complement to Lake Keitele and that is the Fifth Symphony (the first, 1915 version can be heard on the link given below, two further versions being produced before Sibelius was satisfied with its structure). The comparison between the two works comes from my imagination rather than something that I have read, but it is interesting to read of Sibelius’ own words about his Fifth Symphony: 2

The autumn sun is shining. Nature in its farewell colours. My heart is singing sadly – the shadows grow longer..

.. I have a lovely theme. An adagio for the symphony - earth, worms and misery..

..In the evening, working on the symphony. This important task which strangely enchants me. As if God the Father had thrown down pieces of a mosaic from the floor of heaven and asked me to work out the pattern.

In addition to a consideration of autumn, and of passing time, Sibelius was also affected directly by Nature and the dominant theme of the final movement of the Fifth Symphony was inspired by the observation, in April, of sixteen swans. You can easily imagine them flying in to Lake Keitele after the ice had broken up and with another cycle of life beginning.

Although Sibelius provides a musical accompaniment for the picture, I don’t need the music to feel the beauty, and also the sadness, in the painting. Nor do I need it when alone by northern lakes, as the near silence provides tranquility and peace, mixed with a little fear and anxiety about what is to come. I do not have the talent to describe my feelings, unlike Gallen-Kallela and Sibelius, so will not try further. Some might call these feelings part of a religious experience and cite the presence of something supernatural, as Sibelius suggested; others may feel I am being overly sentimental and Romantic. I'll live with that.