Looking for the sublime

I was fascinated by Canada as a teenager. It came from looking at pictures in books that I borrowed from the local lending library and, while I appreciated the skyscapes of the prairies, it was the grandeur of the mountains, the lakes and the forests that had the most appeal. There was also the sense of scale and the vastness of it all.

The interest in the Canadian landscape re-surfaced when I was an undergraduate. Fascinated by animals and plants, I knew that I wanted to continue to study Biology by conducting research in the field. I mentioned this, together with my feelings about the boreal landscape, to one of my lecturers and he kindly put me in touch with possible research supervisors in Canada. These contacts resulted in several provisional offers, providing I could get funding from teaching assistantships or research grants. However, nothing more came of it and I stayed in the UK; my fascination for boreal landscapes being given reality when I studied lakes and rivers in northern Sweden and in Finland. It was in these countries that I could get a sense of wilderness; of something that appeared to show no influence of humans. I can sum up this sense by using, as illustration, Gallen-Kallelas’s painting Lake Keitele (see below). Gallen-Kallela was a seeker of “virgin Nature” and I can easily empathise with that [1]. 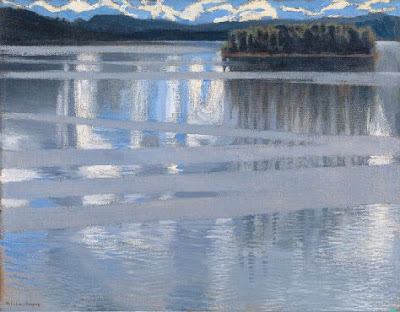 During my undergraduate years, I spent many happy Saturdays visiting the National Gallery and the Tate Gallery (as it was then) in London. Torbay, where I grew up, was not a centre for looking at a wide range of paintings and I felt drawn to the galleries and to certain works. It wasn’t because of any skill that I had in art, as I have no artistic talent, but I felt a strong connection with some of the images and the way that landscapes had been portrayed. It was similar to looking at pictures of Canada when I was younger - something “clicked” and I didn’t know why, nor was I interested in thinking about that.

As an old man, I realise that my interest in the boreal landscape, and the various ways in which it was illustrated in great paintings, were part of the same identity – I am an unabashed Romantic with a love of the sublime. The latter possibly comes from a religious upbringing that clearly influenced me, even though I left formal religion when I was twelve. It now takes a nebulous form, but it is certainly there (and not only in paintings, but also from music and poetry). While artists like Caspar David Friedrich and Harald Sohlberg introduced Christian symbolism into their paintings of sublime landscapes, there seems to me something even more powerful if the landscape overwhelms without any obvious theistic force (although theists might suggest that I was just being blind).

It’s not to say that I don’t appreciate both natural and painted landscapes that do show human influence. The Renforsen rapids on the River Vindel in northern Sweden always fill me with awe [2] and, during the spring flood caused by snow melt in the mountains, there is something about their impressive power that certainly stirs the soul. There are, however, so many signs of human influence here: bridges, paths, a hotel, a café, mill buildings, car parks, etc. that one realises it is far from wilderness. If part of the splendour of being in wilderness comes from tranquillity, Renforsen, other rapids, and raging seas are part of another kind of awe; that which contains an implied threat. Compare Gallen-Kallela’s Lake Keitele with Johan Christian Dahl’s The Lower Falls of the Labrofoss (see below) to see examples of this contrast. Both portray the sublime. 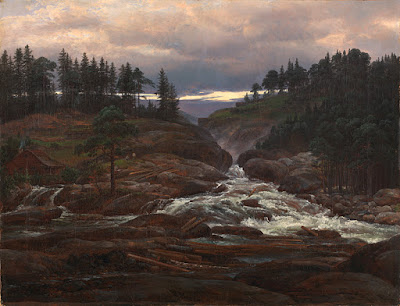 Of course, the art and aesthetics of the sublime have been written about many times and I’m not saying anything new. Rather, in a pretentious way, I’m trying to understand my personal view of landscape and what has made me so enraptured by some natural and painted scenes. I’m hooked.