I have often thought that it is easier to believe in the creation of organisms than in their evolution. All that is required is a belief in a Creator, but if one does not have that, one is left to pondering the many steps that must have occurred to produce the extraordinary adaptations of, and associations between, living organisms that we see around us. We cannot comprehend the time scales over which these changes have taken place, so all we are left with are our speculations.

In the past few weeks, I have been taking a WEA course on the influence of Darwin’s On the Origin of Species on 19th Century thought. It is led by Paul Ranford, the excellent historian of science, who introduced us to other works by Darwin, including his book The various contrivances by which orchids are fertilised by insects, orchids becoming a consuming passion of the great man while he recovered from the effort of producing the “Origin”. It set me to reading what Darwin had to say about the bee orchid (Ophrys apifera – see below, with an illustration from Darwin’s book). 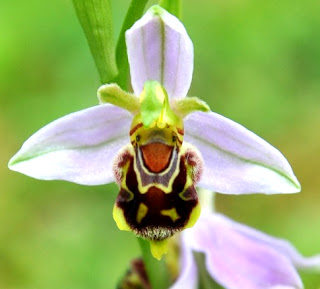 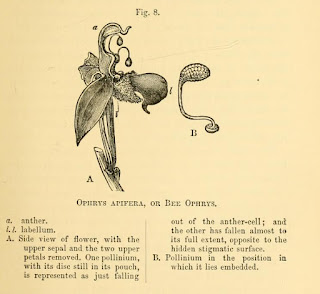 These are some extracts from Darwin's book [1]:

The Bee Ophrys differs widely from the great majority of Orchids in being excellently constructed for fertilising itself..

..When a pollen-mass is placed on the stigma and then withdrawn, the elastic threads by which the packets are tied together break, and leave several packets on the viscid surface. In all other Orchids the meaning of these several contrivances is unmistakeably clear – namely, the downward movement of the lip of the rostellum when gently pushed – the viscidity of the disc – the depression of the caudicle as soon as the disc is exposed to the air – the rupturing of the elastic threads – and the conspicuousness of the flower. Are we to believe that these adaptations for cross-fertilisation in the Bee Ophrys are absolutely purposeless, as would certainly be the case if this species has always been and will always be self-fertilised? It is, however, just possible that insects, although they may have never been seen to visit the flowers, may at rare intervals transport the pollinia from plant to plant..

..The whole case is perplexing in an unparalleled degree, for we have in the same flower elaborate contrivances for directly opposed objects..

..As it can hardly be doubted that O. apifera was at first constructed so as to be regularly cross-fertilised, it may be asked will it ever revert to its former state: and if it does not so revert, will it become extinct?

The question is a valid one and Darwin involved his correspondents in finding out more about the fertilisation of bee orchids. One of his regular correspondents was Philip Henry Gosse, the avid creationist, who was busy in 1863 “examining bee orchis for Darwin at Petit Tor” [2].

The bee orchis (orchid) gets its common name from its appearance, said to resemble a solitary bee and we know that male bees are essential for the fertilisation of some orchids. We do not know whether the flower looks like a bee to bees but we do know that the floral pigments give signatures under untraviolet light that may act as attractants. Since Darwin’s time, we recognise that another important mechanism is involved in attracting pollinators and this is of much greater significance than the appearance of the flowers, that so fascinates humans. Orchids in the genus Ophrys secrete chemicals that mimic sex pheromones produced by female bees and these vary from species to species, thus attracting specific pollinators, although accidental fertilisation by a range of insects may also be a possibility. Ophrys apifera is fertilised by a solitary bee in Mediterranean regions but, as Darwin discovered, self-fertilisation occurs in the northern part of its range.

There is a lively contemporary debate on the significance of the various factors involved in the fertilisation of Ophrys [3,4,5] and, fittingly, this exchange of views took place in a journal of the Linnean Society, the society that was instrumental in introducing Darwin’s ideas on evolution. The three papers (and there are many others on the topic) show clearly just how complex the evolution of the orchids has been. Mention must also be made of why male bees are often the agents of fertilisation of the orchids, by transferring pollen from one flower to another. The females of solitary bees mate soon after emergence from the pupa [6] and it is probable that there is a surplus of males or, if mating is a once only event, there are males constantly looking for mates and, by deception, being attracted to orchids.

The whole arrangement is a remarkable example of co-evolution and one wonders about the timing of the steps involved in the association and whether they were gradual or rapid (over geological time). What came first? Was it the mating biology of bees, the selection of colour patterns in Ophrys flowers that became attractive to insects, the production of a series of chemicals that act as attractants, differences across the range of the plants, or what?

[1] Charles Darwin (1862) The various contrivances by which orchids are fertilised by insects. London, John Murray.

[2] Edmund Gosse (1896) The naturalist of the sea-shore: the life of Philip Henry Gosse. London, William Heinemann.

I would like to thank Paul Ranford and my WEA classmates for their stimulating discussions. It is great to leave a course with many more questions than answers – after all, that’s the fundamental nature of science.

A gray whale off the coast of South Devon?

The gray whale (Eschrichtius robustus – see above) is today only found in the north Pacific Ocean, yet skeletal remains have been found in the eastern Atlantic [1]. Indeed, Gray named the genus [2] from a cervical vertebra that bore a very close resemblance to vertebrae of an “imperfect skeleton” discovered in Sweden. This vertebra was sent to Gray by William Pengelly FRS of Torquay (see below), a distinguished palaeontologist and famous for his excavations of local cave fauna, especially those of Kent’s Cavern, 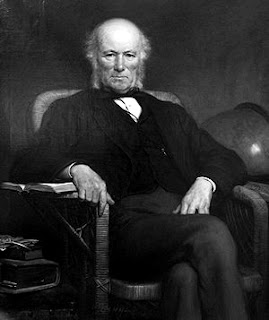 This is what Pengelly wrote [3]:

A few years ago, but the exact date has escaped me, there was brought to my house [“Lavorna”] a large bone which had been washed ashore on Babbicombe beach [the old spelling], near Torquay. It was not difficult to see that it was part of the vertebral column of a cetacean, and that it had undergone considerable abrasion. That, however, which chiefly arrested my attention was the fact that such parts of its surface as were unrubbed were covered with a darkish stain, from which the abraded parts were free: a fact which led me to conclude that the stain was superinduced.

The staining reminded Pengelly of that on bones from deposits formed from a submerged forest within the current Torbay [4] and which had subsequently become flooded. These deposits contained the bones of deer and other terrestrial animals, but whales clearly could not have existed here. Radiocarbon dating of the vertebra, and two others that were also collected from Babbacombe Bay, just to the north of Torbay (see above), showed the bones to be 340 ± 260 years old – very recent compared to the submerged forests and thus likely to have become stained by falling on to the sediments. It is presumed that there was a population of gray whales in the eastern Atlantic until the 17th Century [1], but how the Babbacome vertebrae came to be washed ashore remains a mystery. The bones are large (the one illustrated below being 41 cm across) and that only adds to all the questions as to their origins. Perhaps gray whales were regular visitors to Babbacombe Bay and Torbay? Perhaps the bones were thrown overboard from a ship returning from the Pacific with unusual mementoes? Who knows?

[2] J.E.Gray (1865) Notice of a new whalebone whale from the coast of Devonshire, proposed to be called Eschrichtius robustus. Proceedings of the Zoological Society of London pages 40-43.