If I mention the word “worms”, most people think of earthworms and many view them with distaste. There are several species, all looking rather similar, and we don’t find them attractive because they are slimy and often live in decomposing organic matter. However, it is not unknown for infants to try eating them, so our dislike is something we learned from adults or older children.

We are less familiar with marine worms, and there are many different forms. The white calcareous tubes you see on rocks, or the small spiral tubes found on seaweeds like wracks, are secreted by worms and there is every likelihood that the worm is still resident when you see their ”home” at low tide. Marine worms of many species live in tubes and, in addition to those made from secreted calcium salts, these may be poorly consolidated – as with the lugworms beloved of sea anglers – or constructed of grains cemented together to prevent abrasion by moving sand grains. However, these tubes offer little protection against predation by wading birds in shallow water. 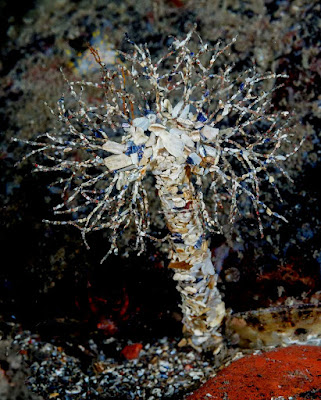 The mason worm (Lanice) is widely distributed and extends from the inter-tidal down to 1900 m [1] and may occur in very high densities (up to 20,000 individuals per square metre [2]). Lanice makes tubes that extend above the surface of the sandy mud in which the worms live and each tube has extensions at its tip. Where present as dense reefs, Lanice tubes promote sedimentation of fine mineral and organic particles and these sediments increase biodiversity [3]; the worms being referred to as “ecosystem engineers”. Close examination shows the tube and extensions to be made of sand grains and shell fragments cemented together by a secretion of the worm - thus the term mason worm (see above in a wonderful image captured by Jim Greenfield). 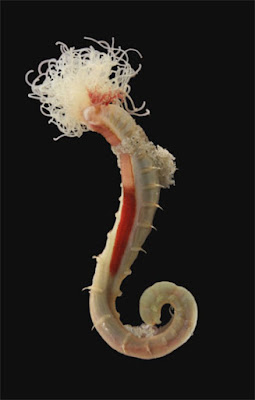 Lanice is in the group of worms known as terebellids and they feed when the worm and its tube are covered by water, so feeding can best be observed when worms are transplanted to an aquarium tank. The tentacles at the front of the body (see above) are extensible and very mobile and, if we  look at them under a microscope, we see many hundreds of thousands of beating hairs (cilia) over their surface and also a covering of mucus, produced from cells within the tissues of the tentacles [4]. Algae and detritus become attached to the tentacles when they are spread on to the substratum and the cilia then carry the mucus-bound “packages” to the mouth where they are ingested. Waste products are removed by the currents of water that the worm generates by moving its body within the tube.

Lanice also feeds by spreading the tentacles over the “fan” of extensions constructed at the top of its tube, collecting particles from the currents that result from wave action. We know that the particles carried in suspension contain micro-aggregates formed by bubbles created when waves break [5] and these, too, form part of the food for the worms, together with anything else that becomes swept up.

How do the worms locate their habitat? The answer is that it is largely a matter of chance. After reproduction (there are separate male and female worms [6]), larvae become planktonic and are carried around in the water column by currents and by their own swimming by means of the ciliated bands on their body (a second use of cilia for larvae as they also use these organelles to gather food). The large majority of planktonic larvae are eaten, or fail to reach a suitable substratum, but, when they do, each larva swims down and begins to transform into a small worm and begin their work as “masons”.

Far from feeling distaste at the sight of these worms, I marvel at their biology and how they evolved their form and habits. The sense of wonder is one of the pleasures of Natural History and the never-ending fascination of looking at living creatures.

[2] A. Nicolaidou (2003) Observations on the re-establishment and tube construction by adults of the polychaete Lanice conchilega. Journal of the Marine Biological Association of the United Kingdom 83: 1223-1224.

[4] R. P. Dales (1955) Feeding and digestion in terebellid polychaetes. Journal of the Marine Biological Association of the United Kingdom 34: 55-79.

[5] R. S. Wotton (1996) Colloids, bubbles and aggregates: a perspective on their role in suspension feeding. Journal of the North American Benthological Society 15: 127-135.