Philip Henry Gosse, the famous Victorian naturalist and populariser of marine biology, published Land and Sea in 1865 and, in his first biography of his father [1], Edmund Gosse writes of the book:

..some of the sketches were rather trivial and diffusely told, besides possessing the disadvantage that they seemed like discarded chapters from other books, which indeed they were..

However, one chapter – “Meadfoot and the Starfish” - shows the writing of Henry Gosse at its best. He describes a walk from his home in St Marychurch, Torquay, to a local landmark called Daddyhole Plain and then onwards to the beach at Meadfoot (shown below in an image from the BritishBeaches website). 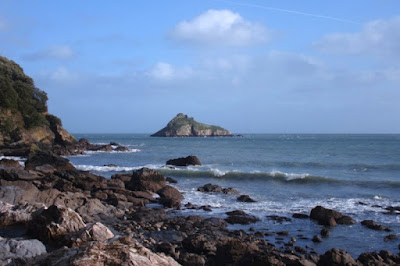 The exertion of walking and collecting had given just enough of fatigue to the muscular system to make the dolce far niente a luxury. Under the shadow of a great angular block, I reclined, enjoying the beauty and exhilaration of the sunlight, while relieved from its oppression. Most brilliant was the flood of light with which very object was suffused in the unclouded blaze of that summer noon. How fine was the interchange of broad light and deep dark shadow, on those angular limestone cliffs! How glowing the coloured breadths of golden furze and purple-sheeted heath, expanded sea and vaulted sky!

His attention then turned to the rock pools at Meadfoot and the algae that were abundant here, one being Delesseria sanguinea, an herbarium specimen of which is shown below (image from Wikimedia Commons). 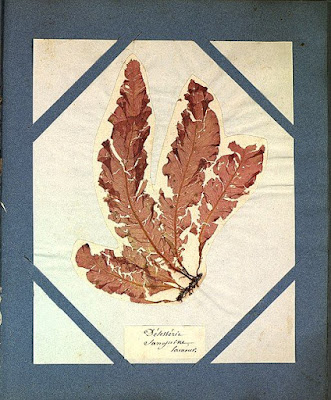 This very fine species is not uncommon all along the coast hereabouts, but is never seen except at the lowest level of the tide, where it grows often in considerable quantity, large leafy tufts springing out of the basal angles of the perpendicular masses of rock, or in persistent tide-pools hollowed in the rock itself. It will not bear exposure to the air with impunity, as many of our sea-weeds will; for if left uncovered but a short period, a quarter of an hour or even less, the delicate rose-crimson membrane becomes defiled with large blotches of a dull orange-colour, which shew that its texture is irrevocably injured, decomposition having already set in.

Thus, Henry Gosse introduces his readers to organisms of deeper water and the alien world that represents for us: the passage also conjuring up the pleasure of investigating the sea shore, which became a passion for many Victorians. As I sit writing this piece in my study in Hertfordshire on a very sunny June day, I certainly feel the pull of Meadfoot, just as many readers of Land and Sea must have done. All the more so, as I was brought up in Torbay and walked over the same shores that so beguiled Gosse.

Quite something for a chapter written more than 150 years ago.

[1] Edmund Gosse (1896) The Naturalist of the Sea-shore: The Life of Philip Henry Gosse. London, William Heinemann.

A newspaper headline in April 2019 read: “Invasion of the monster jellyfish! British resort harbour is inundated by swarm of huge sea creatures the size of dustbin lids” [1]. This sensationalist journalism described an influx of barrel jellyfish (Rhizostoma pulmo) into Torquay harbour, where their appearance caused quite a stir on social media. 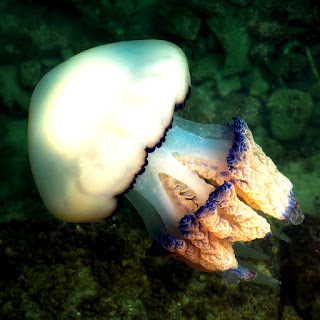 R. pulmo (see above for a photoshopped image by Ales Kladnik) commonly “swarms” in the Mediterranean and north-eastern Atlantic coast and their appearance en masse often results in much curiosity and many subsequent questions:

(i) Why do these jellyfish form swarms?
(ii) Why do they come into shallow water?
(iii) Do they sting [humans] and what do they eat?
(iv) What feeds on them?
(v) Do humans eat jellyfish?

It isn’t easy to get answers, but a bit of searching gave me some information:

(i) Whatever the primary cause of swarming, it usually results in increased breeding success and the start of another cycle in the fascinating life history of these animals. Male barrel jellyfish release sperm into the water where they fertilise eggs that have been released by females. The resulting larvae are called planulae and they are very small (just a few mm in length) and covered with cilia (hair-like extensions of the body wall) that enable them to swim in the plankton, along with the larvae and adults of many other animals. Each planula transforms into a polyp when it encounters the sea bed and these polyps may produce new polyps by budding, or they may form a strobila. The process of strobilation produces mini-jellyfish (ephyrae) that, when sufficiently formed, break away and begin a free-swimming life, eventually growing into the jellyfish with which we are so familiar.

The life cycle of the barrel jellyfish, so little known to most of us, is described in detail in a research paper by Fuentes et al. [2] that contains this summary figure (individuals not drawn to scale): 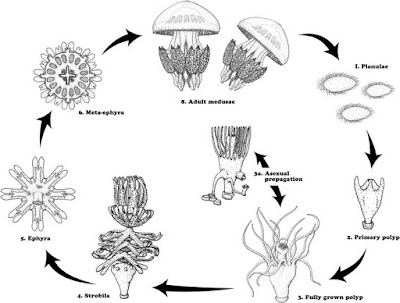 (ii) Migration into shallow water increases the chances of planulae being able to locate a substratum to begin their transformation into polyps and it may also serve to concentrate adult jellyfish prior to reproduction. It seems improbable that they can perceive when water is shallow (they are very primitive animals with nerve fibres but no nervous system [3]) and their location in shallow water may be a consequence solely of currents. It is also likely that shallow water promotes the concentration of their planktonic food; this, too, being effected by water currents.

(iii) Some jellyfish are very harmful to humans, with long trailing tentacles bearing stinging cells that discharge barbs loaded with toxin. This adaptation was present for hundreds of millions of years before humans appeared on the scene and these “poisonous jellyfish” use their stings to capture animals, especially fish, that are then drawn to the mouth by the tentacles. Barrel jellyfish are quite different and they feed on plankton which are captured by small stinging cells and also by mucus, cilia then being used to transfer bound food packages (largely from the bell) to the mouth. Their stings are not strong enough to penetrate human skin.

(iv) Barrel jellyfish are eaten in large numbers by leatherback turtles (Dermochelys coriacea) - this is one of the reasons why floating plastic bags are such a menace to these animals, as they perceive them to be food. Some R. pulmo are taken by other animals, but they are not subject to human “fisheries”, as are other types of jellyfish, especially in the East.

(v) Methods of preparing jellyfish are described by Hsieh et al. [4] and the process takes time and is labour intensive. The first stage involves separating the bell from the oral arms and both are washed in sea water. They are then sprinkled liberally with salt and with alum; the former to reduce the high water content of the jelly between the two tissue layers of the body (there are only two, most animals have three [3]), and the latter to act as an anti-bacterial agent. The drying jellyfish are turned every few days and eventually become “crunchy and crispy” [4]. The finished product can be kept for up to one year and strips are commonly cooked as a stir-fry with sesame (see below). 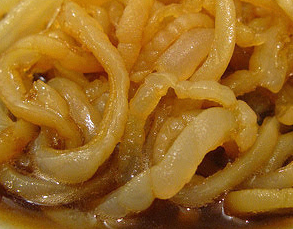 Jellyfish could become a major food in the future. They are abundant, tolerant of low oxygen tension and high temperatures, and can be scooped up when they from swarms. However, not all jellyfish are likely to be edible and some method of reducing the labour-intensive drying process will be needed before we get commercial production. When that is achieved, maybe we will all be eating jellyfish?