Wotton’s place in the history of Biology

Stanley Goodman, the eminent economist and historian, mentioned the name of Edward Wotton to me. As Stan is a polymath, it came as no surprise that he had come across Wotton, but I knew nothing of my namesake (and no relation, I presume). Of course, I was then prompted to find out more. It turns out that Edward was an important figure in the history of Biology, yet he is not mentioned in Charles Singer’s textbook on the subject [1]. So, who was Edward Wotton and why was his book - De differentiis animalium libri decem [2] - an important influence on contemporary biologists and those who were to follow?

Born in Oxford in 1492, Edward was educated at Magdalen College School, where he was a chorister, and at Magdalen College Oxford, graduating in 1514 [3]. He then moved to the newly-established Corpus Christi College to teach Greek, although he retained rooms at Magdalen. Bishop Fox, the founder of Corpus Christi, granted Edward leave and he travelled to Padua, a great cultural centre, with its well-established University (founded in 1222) and glories such as the Scrovegni Chapel and its wonderful interior by Giotto. At Padua, Edward studied for an MD and returned to Oxford to receive the same degree in May 1526 [3].

Edward Wotton was admitted as a fellow of the College of Physicians and, like so many of those who practised medicine at the time, developed an abiding interest in natural history, not so much from first-hand study but from extensive scholarship of known texts, especially of those by Aristotle and his followers. The result was the publication of De differentiis animalium libri decem in 1552, an encyclopaedic account of the knowledge of the time. I find it a challenge to read as it is in Latin, so I am dependent on others to inform me of its details. Animals are described under headings, starting with many-toed mammals and ending with zoophytes (plant-like animals). A feature of the book is that it separated factual material from that embellished by folklore [4], like the Natural History of Pliny, who was described by Singer as:

..a man of immense industry with an enthusiasm for collection. He did not, however, collect natural history objects, but only information or rather misinformation about them.. ..Unfortunately, Pliny’s judgement was in no way comparable to his industry. He was excessively credulous. Thus his work became a repository of tales of wonder, of travellers’ and sailors’ yarns, and of superstitions of farmers and labourers. As such it is a very important source of information for the customs of antiquity, though as science, judged by the standards of his great predecessors, such as Aristotle or Theophrastus or Erasistratus, it is simply laughable.

Given this attack on Pliny [1], it is even more surprising that Wotton’s book is given no mention in A Short History of Biology, especially as Wotton, like Pliny was a collector of information rather than a first-hand observer. However, the book is cited in Mayer’s The Annals of European Civilization 1501-1900 [5]. 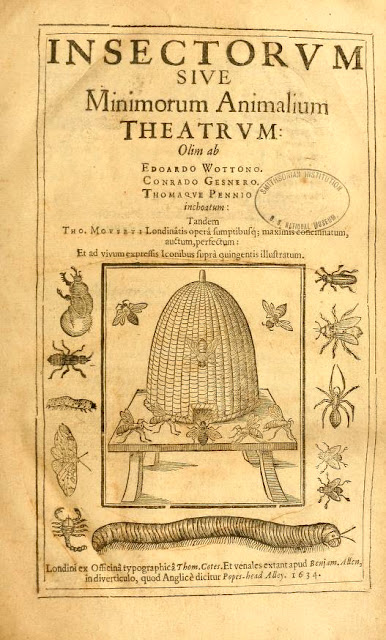 Unlike Edward Wotton, Thomas Moufet (or Muffet or Moffet) was a collector and carried out extensive field studies on insects. Like Edward, he studied medicine in mainland Europe (in Basel, after graduating with a BA from Gonville Hall Cambridge, having transferred from Trinity College [6]). Moufet’s book Insectorum, sive, Minimorum animalium theatrum draws on Edward Wotton’s knowledge [7 (and see above)] and was published posthumously in 1634. This book is mentioned by Singer [1] as being important in the history of Biology, but:

The significance for science of classical scholarship was on the wane, and the work of the later schools is conducted in a new spirit.

Interestingly, one reviewer, Haller, believed that Moufet “gave credence to too many fabulous reports [but] acknowledged him to be ‘the prince of entomologists’ before John Swammerdam” [6]. He was certainly inundated with specimens that were sent to him and Singer recounts that he was urgently in need of descriptive terms [1].Some of the illustrations from Insectorum sive are shown below and they enable us to identify insects today, so they must have been very powerful images in their day. There are hundreds of them and the shift in approach from Wotton to Moufet is significant, as Singer points out. It presages the approaches to the study of Zoology that were to follow, but Edward Wotton certainly had an important rôle in the development of studies in the subject. 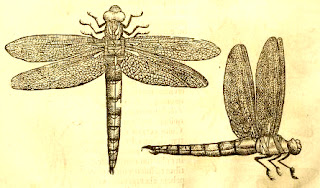 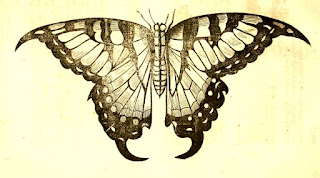 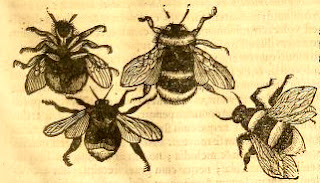 My thanks to Stan Goodman for introducing me both to Edward Wotton and to Alfred Mayer.