A mammoth tooth from a submerged forest

The following, fascinating quote is from an 1865 paper by William Pengelly on “The submerged forests of Torbay” [1]:

A few years ago Mr C.E.Parker purchased an elephant’s tooth of some Brixham fishermen who had just taken it up in their trawl whilst fishing in Torbay.

The purchase took place in the 1850s and Pengelly describes how Dr Falconer of the Torquay Natural History Society identified the tooth as being that of a mammoth. He continues [1]:

Had this been a portion of an existing species it might have been supposed that it had been lost from or with some ship returning from India or Africa; but being a relic of an extinct animal it is obvious that it must have been dislodged from some geological deposit. That this was near at hand and that the fossil hade been exposed but a very short time may be safely inferred from the facts that it is entirely destitute of marks or traces of abrasion, and that there are no marine incrustations on its surface.. ..there can be no reasonable doubt that the trawl tore it out of a submarine part of the forest.

We know that the remnants of these forests are exposed occasionally by wave action, as can be seen in an excellent brochure published by Torquay Museum and available on the Web [2]. The appearance of these remnants must come as a surprise to all those who know Torbay as a holiday destination, with golden sandy beaches like those of Tor Abbey Sands, Goodrington Sands and Broadsands (see images below), all of which are named by Pengelly as having deposits to seaward that contain the remains of animals such as red deer, wild hogs, the long-fronted ox and the mammoth [1]. 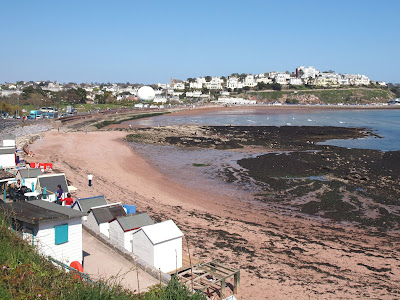 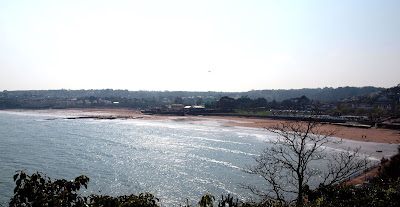 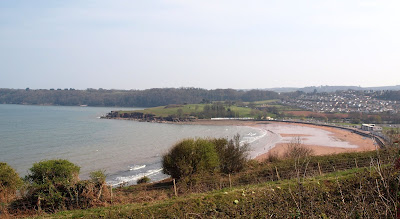 These beds then also extend inland, with surficial deposits overlying the clay and, according to Pidgeon [3] “most of the trees found prostrate in the forest-clay are.. ..willows.” The ancient forest is therefore likely to have been waterlogged from time to time and that promoted the deposition of organic and mineral particles that formed the clays. So, what we know as seaside and sea was, just a few thousand years ago, a region of swampy forest between rocky outcrops and these forests were habitats for many large animals. 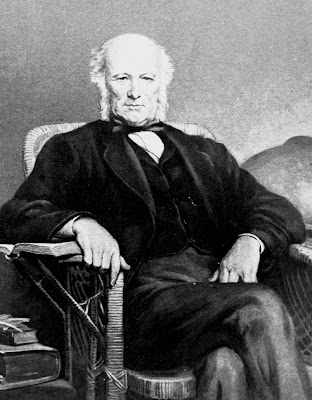 Pengelly (above) was a distinguished geologist, famous for excavations in Kent’s Cavern in Torquay that contributed much to our knowledge of ancient cave faunas and the strata in which their remains were found. He was recognised widely by the scientific community, being made a Fellow of the Royal Society for his research, and maintained an active correspondence with many who shared his interests [4].

Pengelly lived in a house in the Upton area for many years, moving to Torquay from Looe in Cornwall and his house was named Lamorna, probably in honour of that region of his home county. He ran a school and was much involved with lectures and the work of the Torquay Natural History Society; the town being an important centre for the Nineteenth Century passion of Natural History, which included the study of rocks and fossils.

At the time of Pengelly’s paper, it was recognised that there had been an increase in sea level in the past few thousand years, and that this resulted in the submersion of the forest, but the rise was not linked actively to the melting of massive glaciers at the end of the last glaciated period ("Ice Age"); knowledge that we now take for granted. Coming 20 years after Pengelly’s paper, Pidgeon focused on whether the fossils found in the submerged forest beds were contemporaneous with early humans. We love anthropocentricity, and especially like the idea that our ancestors as modern humans co-existed with mammoths, these being such popular animals in our imagination. It is intriguing that complete bodies of these proboscideans have been found frozen in the permafrost of Siberia [5], but, unfortunately, Torbay mammoths have been much less well preserved.

[3] D. Pidgeon (1885) On some recent discoveries in the submerged forest of Torbay. Quarterly Journal of the Geological Society 41:9-22.

[4] Hester Pengelly (1897) A Memoir of William Pengelly, of Torquay, F.R.S., Geologist, with a selection of his correspondence. London, John Murray.