I like perusing the titles of books in the libraries of large country houses. They give an impression of the interests of previous owners of the house and, because of my liking for Natural History, it is volumes on this subject that particularly catch my eye [1,2,3]. 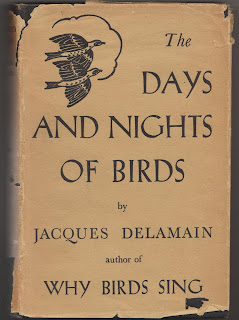 Last week, I visited Standen House, the country home of the Beale family from the end of the Nineteenth Century. It has lovely gardens and the interior of the house is decorated in Arts and Craft style and contains some very fine furniture [4]. As would be expected in the library of a family with seven children - and, later, grandchildren - there were many volumes about fairy tales and adventure, but the book that stood out for me was The Days and Nights of Birds by the French amateur ornithologist Jacques Delamain (the cover of my copy is shown above). Ornithology has always been a popular pastime, and many books have been written about the habits, and habitats, of birds. In the Foreword of The Days and Nights of Birds [5] Delamain writes:

"But has not everything essential been said about birds?" The question was put to me one day by Abel Bonnard who was unwilling to see too narrow a limit imposed on his keen poetical curiosity. I assured him that this subject, like all which touch nature, was inexhaustible. Indeed, for the seeker, one discovery leads to another and new problems appear which the mind tries to solve. The beauty of living creatures and the setting in which they move, life's harmony and complexity, always awake in us unexpected echoes. Intellectual curiosity, the aesthetic sense and poetry never fail to renew the world.

Each one of us follows his own way, seeking to understand the mystery of creation. For some, the way grows endlessly broader, embracing vast horizons, others advance slowly and shortsightedly along a narrow path. But no one can set out without discovering riches..

We can see that Delamain's interest in birds was wrapped up with his love of Nature and he communicated this in an attractive prose style that is apparent even in translation. It is easy to see how readers may be stimulated to look more closely at birds after reading his books and Delamain concludes the Foreword by writing:

My first book, Why Birds Sing, brought me precious assurance from my readers that I had taught them how better to observe Nature, and how to love her more. If my present volume induces them to look once more on the ever varied spectacle offered to our eyes by the seasons as they pass, and increase their interest in the creatures that people our fields, woods and rivers, it will have fulfilled its purpose.

One can imagine Mr Beale, or visitors to Standen, reading the book and using it as a guide to their own observations on walks in the garden or around the estate. 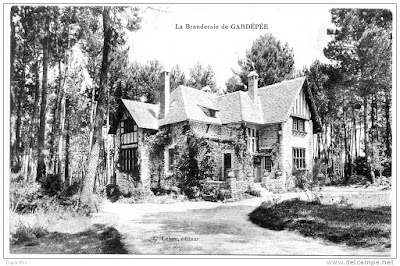 The writings of Delamain influenced many others, including the composer Olivier Messaien. Messiaen was fascinated by birdsong and Hill and Simeone [6] describe the result of his visit to Delamain's home La Branderaie de Gardépéé (see above):

In April 1952,.. .. Messaien took what proved to be a decisive step. At the suggestion of his publisher Leduc he paid a short visit (15-17 April) to Jacques Delamain, a leading ornithologist and prolific author. Delamain lived in south-west France, his house at Gardépéé set in large wooded grounds midway between Cognac and the neighbouring town of Jarnac, where the Delamain family firm still produces brandy. Delamain's tuition enabled Messaien's knowledge of ornithology to catch up with his musical aspirations. In particular, he learned to identify birds solely through their songs or cries: 'It was [Delamain] who taught me to recognise a bird from its song, without having to see its plumage or the shape of its beak.'

..the visit to Delamain proved a life-changing experience. Delamain inspired Messiaen to pursue his researches in a more systematic way. The results can be seen in the surviving birdsong notebooks, the Cahiers de notation des chants d'oiseaux, in which Messaien started to collect his observations from nature..

Messaien went on to compose Réveil des oiseaux and Hill and Simeone [5] include a quote from the composer about this work:

"In Réveil des oiseaux [...] there's really nothing but bird songs [...], without any added rhythm or counterpoint, and the birds singing are really found together in nature; it's a completely truthful work. It's about an awakening of birds in the beginning of a spring morning; the cycle goes from midnight to noon: night songs, an awakening at four in the morning, a big tutti of birds cut short by the sunrise, forenoon songs, and the great silnce of noon.."

You can hear the piece in this video clip [7] and it is interesting that it follows a sequence of bird song through a day, perhaps in homage to Delamain's Days and Nights of Birds.

I find the link between Delamain and Messaien fascinating: a great composer and a wonderful writer both communicating about Nature and the pleasure that it gave them. Thank you Standen, and the National Trust, for giving me a chance to tell the story.

"The tide is setting in against Darwinism" 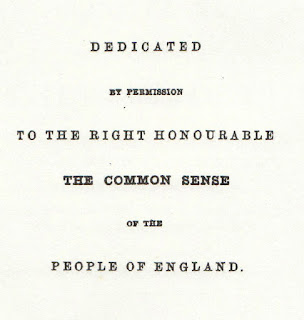 The quote in the title of this post comes from All the articles of the Darwin faith (of which 67 are given) published in 1875 by the Reverend F. O. Morris [1 – see above for its dedication]. This was sixteen years after Darwin's On the origin of species and Morris was tenacious in his opposition to all those who supported the idea of the evolution of species from more primitive ancestors. Morris's central argument can be summarised by a quote from his book:

..Mr Darwin [starts] by assuming his principle of evolution as the sole origin of species, and rejecting separate creation as "unscientific". In other words, you must first grant that man is descended from a monkey, and then it is "not difficult to conceive" the intermediate steps; but if you decline to admit this petitio principii, you are wilfully closing your eyes to what Mr Darwin assures you is the fact. Such is the entire circle of this gentleman's logic. The book is full of interesting observations on natural history, exhibiting more or less relevancy to the argument it seeks to sustain; but the induction never advances a step without a confession of logical defectiveness. We are treated to tendencies, and probabilities and conjectures, which derive all their force from a previous assumption of the point to be proved. Take away this, and there is hardly a proposition in the whole work which could pretend to the character of a logical conclusion.

Another key argument against the idea of evolution is given in one of the earlier "articles" as proposed by Morris:

In fine, I believe that although the Mosaic account of the Creation is borne out by the "Testimony of the Rocks" in a most wonderful manner, yet it does not suit the theory I have taken into my head, it cannot possibly be true, and I do not believe a word of it.

There are thus two prongs to Morris's attack: that Darwin based his ideas on an assumption; and that those who "believe" in evolution are opposed to the biblical description of Creation. So, who was Morris and why did he feel the need to publish his attack?
The son of a Royal Navy officer, Morris was brought up in a strict and loving home and "the sterner and determined nature of the father and the exceeding gentleness and tenderness of the mother were united in the son to a remarkable degree" [2]. As a young boy, he had a strong interest in Natural History and this was to stay with him through his time at Oxford (where he read Classics) and after he was ordained in the Church of England. He became famous as the author of a number of books on birds and insects (see some title pages below, top), that were based on his own collections and on detailed observations. Although these works gained him recognition, and a small income, he was fortunate in having the living at Nunburnholme in the Yorkshire Wolds, a small parish that came with a rectory and an income that sustained him and his family for many years (from 1854 -1893) . He is buried next to the church (shown below, bottom). 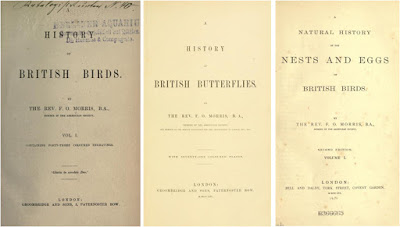 Earlier he had been the rector at Nafferton for nine years (16 miles from Nunburnholme [3]), a larger parish providing a smaller living [2,4], and, during his time there, he began to collaborate with the printer Benjamin Fawcett of Driffield, resulting in the History of British Birds and his other popular works of Natural History. These were only one result of his industry, for he wrote many pamphlets, read papers at meetings, and corresponded widely. He enjoyed discussion with friends, especially Richard Wilton, who was the Rector of an adjacent parish, and they spent many hours in conversation on many topics. Among these was the increasing influence of "Darwinism" [2].

Somewhat isolated as a country parson, Morris was highly conservative and could not tolerate change. This orthodoxy, manifest in his views on practices within the Church of England, may be the basis of his disdain for Darwin, who knew that characters like Morris would be waiting after the publication of the Origin. In an essay on Morris, Charles A Kofoid writes [5]:

His antipathy to Darwinism found.. ..persistent expression, and, because of his position as a well-known naturalist and his wide acquaintance in clerical, educational, and military circles, probably had some temporary influence as shown by appreciative letters which he copied in the later editions of his anti-Darwinian pamphlets.. .. His long experience as a naturalist seemed not to have given him any insight into the phenomenon of adaptation, the existence of natural selection, or the meaning of an experiment. His Oxford training in logic did not help him to the significance of an hypothesis nor that in ethics to an appreciation of courtesy in argument.

This is a rather harsh judgement and similar to the contemporary one provided by T. H. Huxley that Holt [3] describes as a "masterpiece of the 'expert patronizing the layman' genre", Huxley suggesting that:

Morris should spend five or six years studying physical and biological science, then should read Origin of Species 'with the same earnest desire to grasp their real meaning, as I doubt not, animated you when you read your Bible'.

Unsurprisingly, Morris stuck to his guns after this attack.

In fairness, it is still difficult to design experiments that might be conducted over the time scales needed to demonstrate evolutionary processes. Of course, we now have the ability to examine the genetic structure of organisms and see computer-constructed lineages that clearly demonstrate the mechanism of evolution. Experiments with micro-organisms can also be conducted over short time scales, but with many generations and with huge populations. None of this was possible in Morris's time and I wonder what he would feel about evolution, and Darwin's ideas, were he alive today?

There was never a tide against the ideas contained in On the origin of species, as Morris had predicted. Indeed, Darwin's book is regarded as a hugely influential masterpiece, even by the opponents of its ideas on evolution, while Morris's contribution to the debate on evolution has been forgotten by most.