The kraken - and humpback whales 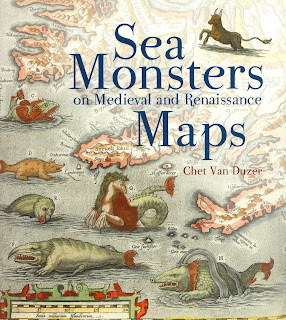 There is a fish not yet mentioned which it is scarcely advisable to speak about on account of its size, which to most men will seem incredible. There are, moreover, but very few who can tell anything definite about it, inasmuch as it is rarely seen by men; for it almost never approaches the shore or appears where fishermen can see it, and I doubt that this sort of fish is very plentiful in the sea. In our language it is usually called the “kraken”.. .. It is said, that when these fishes want something to eat, they are in the habit of giving forth a violent belch, which brings up so much food that all sorts of fish in the neighbourhood, both large and small, will rush up in the hope of getting nourishment and good fare. Meanwhile the monster keeps its mouth open, and inasmuch as its opening is about as wide as a sound or fjord, the fishes cannot help crowding in great numbers. But as soon as its mouth and belly are full, the monster closes its mouth and thus catches and shuts in all the fishes that just previously had rushed in eagerly to seek food.

This account puzzled me at first and then I realised it was probably a description of a behaviour shown by humpback whales that exhale streams of bubbles while swimming 3-5 m under the surface of the sea [2] to panic fish. Bubbles released as the whale swims in a tight circle cause the prey to become concentrated as the fish swim away from the disturbance in the water that is now partially surrounding them, creating a “bait ball”. The whale then lunges up through the mass of fish and, breaking the surface, closes its mouth to allow the release of water through the baleen plates [2]. This results in the capture of much larger numbers of prey than would be possible if humpbacks used the more linear feeding method used by other baleen whales, swimming through shoals at the water surface without lunging or producing bubbles.

Humpback whales also use “bubble netting” to operate in groups, with the advantage that more fish are caught per individual than would be the case should the whales feed singly. It is thus of advantage to all individuals that partake, not only those that are closely related, and produces a larger, greater concentration of prey. Wiley et al. [3] monitored this group behaviour:

..humpback whales capture prey by engaging in complex feeding manoeuvres that are often accompanied by the apparently directed use of air bubbles.. .. Bubble use by humpback whales has been observed in many of their feeding habitats and is reported to occur in a variety of configurations. These bubble-feeding behaviours appear to vary in nature among both individuals and regions; for example, bubble clouds (the production of a single or multiple bursts of seltzer-sized bubbles) are commonly observed from humpback whales in the Gulf of Maine, but never in Alaskan waters.

Such differences point to behaviours learned by individuals in geographically-separated sub-populations, with groups of whales using two approaches to bubble netting - “upward spirals” and “double loops” [3]. The effect is the same - a bubble corral around very large numbers of fish - and the manoeuvrability required results from the large tail fluke and the high aspect ratio flippers (see below), that allow short turning circles and bursts of rapid movement to the surface. The evolution of form in humpback whales thus made bubble netting possible.

It is spectacular for human whale watchers (see the video clip below), as is feeding by individuals,  and one can imagine the awe of thirteenth century explorers in their very small craft watching a kraken belching. As to the appearance of the kraken, we know that it was very large, but not with a mouth as wide as a sound or fjord. Clearly the observation of humpback whales resulted in descriptive stories that became elaborated with telling and the addition of some rich Nordic mythology.

The legendary Paignton cockles (and some recipes…)

I grew up in Paignton in South Devon and was always attracted to the sea, although only occasionally went swimming as I was more interested in walking along the beach to look at what had been washed up by the waves and tides. After the severe winter of 1962/63, I remember that the first storms brought masses of shells ashore, after the very low temperatures had killed a large number of molluscs (the sea froze in a few places). Although there were many common cockles, there were also some more unusual cockle shells, including those of the red-nosed cockle (below, upper) and the spiny cockle (below, lower). These species made Paignton Beach (shown above) famous in Victorian times, as their distribution around the coast of Great Britain is very local, the spiny cockle being largely confined to the shallow sandy sediments of the western part of Torbay. 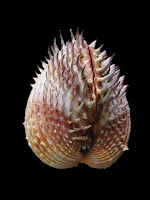 [The red-nosed cockle].. ..is rare and local in England. It is found on the Devonshire coast, at Paignton, and occasionally at Dawlish, and at certain times of the year, especially in the spring after a gale from the east, numbers may be gathered. On paying a visit to the Paignton sands, for the purpose of shell collecting, in the spring of 1862, the beach was quite strewn with broken single valves of this cockle, and there had evidently been quantities of live specimens washed up as well, as we met many persons returning home with their baskets heavily laden with them..

.. There is another cockle found also at Paignton, which is even more scarce than Cardium rusticum, viz. Cardium aculeatum; it is larger and not so solid, with long spines on each rib, and is of a pale brownish-pink or flesh colour. It is very good to eat.

Lovell then describes the “Paignton method of cooking the red-nosed cockle” by frying them in a batter of breadcrumbs after they have been kept in clean water for a few hours to remove sand and other unwanted particles. We’ll come to more recipes later, but first a quote from Philp Henry Gosse, who lived in Torquay and knew the Torbay coast well. In his book A Year at the Shore (1865) Gosse writes [2]:

What is that object that lies on yonder stretch of sand, over which the shallow water ripples, washing the sand around it and presently leaving it to dry? It looks like a stone; but there is a fine scarlet knob on it; which all of a sudden has disappeared. Let us watch the moment of the receding wave, and run out to it.

It is a fine example of the great spinous cockle, for which all these sandy beaches that form the bottom of the great sea-bend of Torbay are celebrated. Indeed the species is scarcely known elsewhere; so that it is often designated in books as the Paignton cockle.. ..The creatures have not changed their habits nor their habitats, for they are still to be seen in the old spots just as they were a century ago: nor have they lost their reputation; they are indeed promoted to the gratification of more refined palates now, for the [Paignton] cottagers, knowing on which side their bread is buttered, collect the sapid cockles for the fashionables of Torquay, and content themselves with the humbler and smaller species.

For those who do not have access to the red-nosed, or spiny, cockles that the “fashionables of Torquay” were able to enjoy, the common cockle (Cardium edule) is still excellent to eat. They can be obtained from cockle “fisheries” in several estuaries, among the best being those from Penclawdd in Wales, where the shellfish are collected using hand rakes, rather than by more aggressive approaches. Cockles are gathered into sieves, washed to clean as much mud as possible from the shells, and then tipped into sacks for easy transport. There is much less occasional foraging than in Victorian times, although John Wright encourages us in his book Edible Seashore [3], in which he describes many edible plants and animals from both the landward and seaward parts of the shore. He recommends that cockles should not be collected during the summer months as this is when they spawn, but they are at their best through September and October. 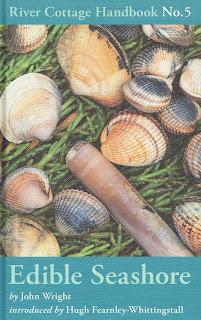 Wright gives an excellent recipe for cooking cockles with chorizo, although they can be cooked using many of the recipes for clams [3]. Cockles with chorizo is easy to prepare: make sure that the cockles have had a chance to “clean themselves” in sea water overnight and then add them to a pot in which small pieces of chorizo have been sautéed to release their oil, with the addition of a little olive oil and a squeeze of lemon juice. Cover and cook until the shells open, garnish with parsley and then serve like mussels, with crusty bread to mop up the juices. If you are interested, further recipes are given below [4,5].

Should there be an excess of cleaned cockles, they can be prepared by placing them in a hot pan and then teasing the cockles away from their shells and placing them in a jar with just enough malt vinegar to cover. Pickled cockles will keep much longer than fresh cockles and they make a delightful snack at any dinner party (but make sure that they have had a chance to clean themselves of sand and silt…).

Do any readers out there, and especially those from Paignton, want to collect and cook cockles, or are you somehow put off by the thought?

[1] M. S. Lovell (1867) The Edible Mollusks of Great Britain and Ireland with recipes for cooking them. London, Reeve & Co.