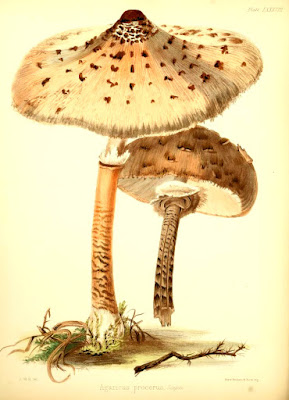 Parasol mushrooms (Lepiota procera – see above in an illustration by Mrs Hussey [1]) are striking and also delicious to eat. Although they are locally abundant, and easily collected, most of us buy mushrooms from supermarkets, or market stalls, as we know that some fungi are lethal to humans and we prefer to err on the side of caution.

In his book British Edible Fungi [2], Mordecai Cubitt Cooke is scathing about those who might confuse parasols with poisonous types:

The Parasol mushroom is known and appreciated throughout Europe, and is doubtless one of the first class for the table, with the great advantage that only dense stupidity could confound it with any suspicious species.

Cooke suggests that the Shaggy Parasol (Lepiota rhacodes), rather similar in appearance to L. procera, is also worth collecting and "there is no difference in their edible qualities". A few years back, I knew of some excellent patches of L. rhacodes and, accompanied by my son, Alex, we would collect enough for a good lunch on Sundays in October and November. We always cooked them sliced into hot butter, but Cooke gives several excellent recipes, many of which will have been familiar to cooks in the Nineteenth Century. At that time, collecting wild mushrooms was more popular than it is today, although Fungal Forays with an expert mycologist still attract good audiences.

Cooke's recipes [2] include the following:

Broiled Parasol Mushroom. - Remove the scales and stalks, and broil lightly over a clear fire on both sides for a few minutes; arrange them on a dish, over fresh made well-divided toast; sprinkle with pepper and salt, and put a small piece of butter on each; set before a brisk fire to melt the butter, and serve quickly.

Baked Parasol Mushroom. - Remove the scales and stalks, and place the caps in layers in a dish; put a little butter on each, and season with pepper and salt. Cover lightly and bake for twenty minutes or half an hour, according to the number in the dish. Put them on hot toast in a hot dish. Pour the hot sauce over them and serve quickly.

Stewed Parasol Mushroom. - Remove the stalks and scales from young specimens, and throw each one as you do so into a basin of fresh water, slightly acidulated with the juice of a lemon or a little good vinegar. When all are prepared remove them from the water, and put them into a stewpan with a very small piece of fresh butter, sprinkle with white pepper and salt, and add a little lemon juice. Cover up closely, and stew for half-an-hour. Then add a spoonful of flour with sufficient cream, or cream and milk, until the same has the thickness of cream. Season to taste, and stew again gently until all are perfectly tender. Remove all the butter from the surface and serve in a hot dish, garnished with slices of lemon. A little mace, nutmeg, or catsup may be added, if preferred, but some think the spice spoils the flavour.

Scalloped Parasol Mushroom. - Mince young fresh agarics, season with pepper, salt, and a little lemon juice, add a little butter, and stew in a warm oven for ten minutes, then put them in the scallop tin, layer by layer, with fresh bread crumbs moistened with milk, cream, or good gravy; bake for five minutes, and brown well before a quick fire.

Procerus Pie. - Cut the fresh agarics in small pieces, and cover the bottom of a pie dish. Pepper, salt, and place on them small shreds of fresh bacon, then put a layer of mashed potatoes, and so fill the dish layer by layer, with a cover of mashed potatoes for the crust. Bake well for half-an-hour, and brown before a quick fire.

Procerus Omelette. - Mince some young fresh agarics; season with pepper and salt; add butter and set them in the oven whilst you whisk well the whites and yolks of half a dozen eggs; then put two ounces of butter into the frying pan, and heat until it begins to brown; having again well whisked up the eggs, with three tablespoonfuls of the prepared agarics and a little milk, pour it lightly into the boiling butter; stir one way, and fry on one side only for five or six minutes; drain it from the fat; roll it up and serve quickly on a hot well covered dish.

In addition to these six, which you are no doubt very keen to try, there are also recipes for Parasol Sauce, Potted Procerus, Essence of Procerus and Procerus Ketchup, the latter two allowing Parasols to be enjoyed during the winter months.

We can imagine Cooke tucking into many feasts of these delectable mushrooms. However, we learn from his daughter, Leila [3], that he suffered badly from indigestion, something that he attributed to having eaten Norfolk dumplings when growing up (these dumplings were made from bread dough and were cooked in stews to add bulk). Leila relates that Cooke took a glass of ale and two Abernethy biscuits (advertised as being suitable for those with indigestion, and devised by a Dr John Abernethy) at 8 o'clock in the evening as he could not eat much [3].

Cooke was a renowned authority on fungi and worked at Kew for three days each week, otherwise identifying many specimens that were sent to him at home [3]. He also wrote more widely in Botany and was an illustrator, although he found it difficult to make money as a Botanist. He had a small pension from the India Office and, in his late eighties, moved to Southsea to be near his grand-daughters. Leila concludes her notes with this paragraph:

Arrived at Southsea, he could go and sit in the sun on the sea front, but in August 1914 war was declared; a bomb from the sea knocked down the garden wall. He could no longer go out. All around was the bustle of war. His grand-daughters were called up. He was a very lonely old man. On 12th November 1914 he died. He was buried in Finchley cemetery. Nobody came. The war was on.

This is so sad after the achievements of Mordecai Cooke and his splendid works on fungi, including his enthusiastic inclusion of recipes. His story becomes even sadder when one learns from Leila [3] that his collections of first editions, poems that he had written, an autobiography, and many other treasures were all destroyed during the Second World War, after an incendiary bomb attack on the repository where they were stored. Sad isn't a strong enough word – thank goodness we have British Edible Fungi to remember him by. 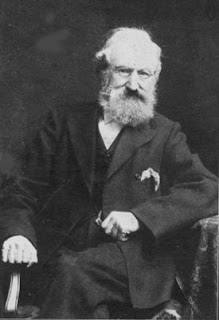 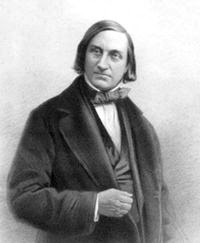 Although he was only 39 when he died, Edward Forbes had a lasting influence in Botany, Zoology and Geology, from both his published work, his lectures and his enthusiasm in supporting others. He had many friends and it is not possible to read the memoir by Wilson and Geikie [1] without feeling the affection in which he was held by fellow Natural Historians. As Daniel Merriman wrote, he must have been "a gentle lovely man"[2] as well as an eminent Professor. 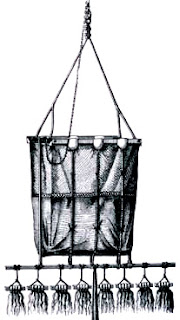 In the field of Marine Biology, Forbes was a strong proponent of the use of dredges to scrape over the sea bed – an example of a dredge is shown above from the NOAA website (in an article that contains a typical poem by Forbes) [3]. He recognised the zonation of organisms on shores and identified the following zones after dredging studies of the Aegean Sea, each being characterised by different groups [1]:

He found that the [Aegean] could be sub-divided into eight provinces of depth; first, as around his own native islands, came the littoral zone, which, from the feebleness of the tides in those seas, did not exceed a range of two fathoms. The second region reached from 2 to 10, the third from 10 to 20 fathoms below the sea-level. The fourth region ranged down to 35 fathoms, the fifth from 35 to 55, the sixth from 55 to 80, and the seventh from 80 to 105. Each of these zones showed a marked and peculiar assemblage of living beings, and could even be further separated into sub-regions. The eighth region included all the space explored below 105 fathoms, and embraced a depth of 750 feet. It was an unknown tract – a new sea-country now added by Edward Forbes to the domain of the naturalist. In the lower zones, the number of species gradually diminished as the dredge sank towards the abysses. From 230 fathoms below the sea-level – the greatest depth Forbes reached – he drew up yellow mud with the remains of pteropods and minute foraminifera, and occasionally a shell. From a comparison of his observations, he conjectured that the zero of animal life would probably be found somewhere about 300 fathoms.

In their paper reviewing this azoic hypothesis [4], Anderson and Rice point out that there were several records of animals being taken from deeper water, even before Forbes dredged the Aegean. They conclude their paper with a section on the benefits of false hypotheses:

The controversy surrounding the azoic hypothesis was not so much due to problems with the theory itself, but rather the reluctance of many contemporary scientists to accept contradictory evidence. By proposing it, Forbes paved the way for later discoveries by stimulating the debate among leading naturalists of the day about how the marine environment influences the distributions of the plants and animals that live in it. For theories, including erroneous ones, are absolutely necessary for the advancement of science.

The acceptance of the azoic hypothesis reflected, in part the status of Forbes in the world of Natural History in the nineteenth century. However, his hypothesis was testable by further investigation and we now know that there is a fascinating, and sometimes abundant, fauna in the very deep regions of oceans.

Some scientific ideas are tricky, or even impossible, to test and those that involve very long time scales are typical of these. For example, conditions in hydrothermal vents provide physico-chemical conditions that promote the formation of the essential organic precursors of the first living organisms. Although we have only known about these vents for less than half a century, it is now possible to hear scientists give talks assuming that life on Earth began in hydrothermal vents, as though repetition of this "fact" establishes its truth. I'm convinced that evolution occurred, although I have no idea where, or how, life began, and I am convinced that the wide array of living organisms that we see around us, and the abundant examples of other life forms we know from fossils, all came about by mutation and selection. However, it is not possible to carry out experiments over time scales of millions of years to test my assumptions. We know that simple organisms that are abundant, and reproduce rapidly, undergo evolutionary changes over short time scales, and similar changes must occur, or have occurred, in multicellular organisms.
What is clear from the acceptance of Forbes' hypothesis is that we must be critical of established views, yet anyone proposing an alternative explanation will feel the weight of the scientific establishment at their back (ask James Lovelock). History shows that scientific explanations change with time and that must still apply – I wonder how many of our accepted theories, and non-testable hypotheses, will be accepted in the future?