The fish that stops ships

Kieren Pitts' excellent little book Hitchers and Thieves [1] introduces us to phoresy (a process where an organism of one species "hitches a lift" on an organism of a different species). It is a habit that many insects and arachnids have adopted, sometimes with the evolution of specialised adaptations, but it is also found in other groups and Hitchers and Thieves begins with a description of remoras. These small fish can swim well, but have an adhesion disc on the dorsal surface of the head that enables them to attach to much larger, rapidly-swimming fish or reptiles. Remoras also attach to ships. 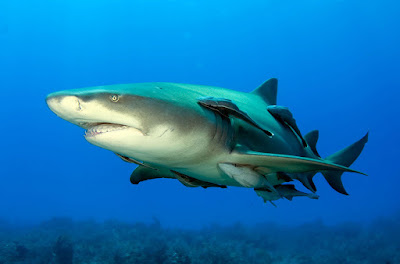 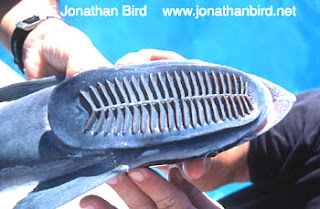 There are thirteen species of remoras in seven genera, all having a similar design (see above – images by Albert Kok and Jonathan Bird). The origin of the adhesion disc has been traced back to the mid-late Eocene (56-39 million years ago) and it evolved from components of the dorsal fin, described in technical language by Friedman et al.[2]:

It is clear that many key transformations, most notably modification of fin spines into laterally expanded lamellae, took place while the disc occupied a postcranial position. At this stage, lamellae were still joined along the midline, comparable with the condition of dorsal fin spines in generalized percomorphs. The second stage was characterized by anterior migration of the disc, the separation of lamellae into paired ossifications, the development of pectination along the posterior margins of the lamellae and an increase in the number of segments in the disc.

Having acquired the disc from the modified dorsal fin spines, further small-scale modifications in some remoras, such as the development of spinules, increased their powers of adhesion [3]. An attached remora must resist drag forces provided by its fast-moving host, but studies in fluid dynamics [4] show that the remora's streamlined shape, evolved when it was free-living, minimises this force.

Remoras feed over the surface of their hosts and are commonly held to eat parasites attached to scales, gills, or other body parts [5]. While analysis of the gut contents of several species of remoras confirms this diet, it is worth pointing out that fragments of parasite exoskeleton are easily identified, whereas much of the material in the gut is not. In addition to parasites, mucus (exopolymers) is ingested and organic matter adsorbed to the mucus often present over the surface of the host may provide an important source of nutrition. Remoras attaching to ships feed on plants and invertebrates growing on the hull, as well as the exopolymers exuded by the community of this surface.

Even this brief review of their adaptations show remoras to be remarkable fish and their Natural History has fascinated observers since ancient times. They have acquired a reputation for slowing, or stopping, ships and, as Pitts points out [1], the name remora (meaning delay or hindrance in Latin) derives from this mythological role. More detail of this mythology is provided by Carroll Camden [6] from descriptions of remoras made by Elizabethans. His essay begins:

One of the strangest examples of unnatural natural history which caught the fancy of Elizabethan writers is the curious account of the little fish called the remora. It has further interest because an examination of the various uses to which the story was put reveals the casual way in which many Elizabethans treated factual knowledge.

The myth is ancient, Pliny describing the remora as "a sucking fish which clings to the hulls of ships and slows them"; amazing considering the size of the fish relative to a ship. Early descriptions of the fish and their suckers were elaborated with each repetition and Camden's essay [6] gives many examples of absurd, yet accepted, "truths" about remoras held by Elizabethans. He also offers an explanation of the basis for such tales:

Thus we have a more or less reasonable explanation of the remora-myth. It is not that the fish actually delays the ship but merely that when a slow ship is beached and scraped the sailors observe at times a remora among the seaweed, moss, barnacles, and other material attached to the bottom; they therefore conclude that the remora can stop a ship, whereas actually it attaches itself to the ship because the soft and tender delaying matter is attractive to remoras.

Fouling of hulls by attachment of barnacles and other living organisms is known to reduce performance and the scraping down of hulls is familiar to many boat owners. But why single out remoras as the agents of slowing a ship? We are amused by such absurdity today yet we are as capable of creating myths as the Elizabethans and the ancients. There are many odd superstitions around animals and plants and, like the remora-myth, they have adherents today. We like to believe that we are living in a more rational age, but I wonder how future scholars will regard some of the certainties of belief that we hold? If Elizabethans were casual in the way they treated factual knowledge, as Camden shows, are we still guilty of the same process? 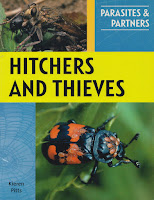 
An article in The Herald [1] was headlined "Moths may hold the key to cutting in lab tests on mammals". It was one of many articles in the past weeks about the use of wax moth larvae (Galleria mellonella) in toxicity and antibiotic testing, reducing dependence on laboratory mammals such as mice and rats. This is not a new approach and the use of these moth larvae in laboratory testing has been reviewed by Desbois and Coote [2]. The lack of a standardised source of larvae has been a hindrance in testing as, without a consistent supply of known strains, there is likely to be variability in test results caused by variations in the stock used. This problem has been overcome by Biosystems Technology [3], a company that provides wax moth larvae as a standardised product under the name TruLarv. 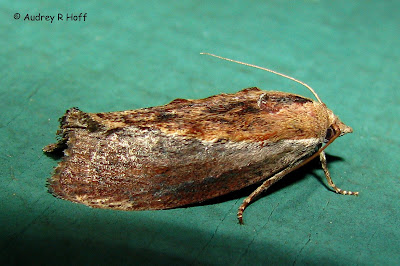 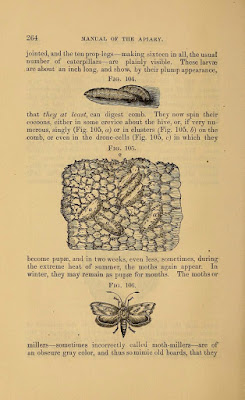 It is understandable that the articles in the media focussed on the reduction of the need for testing on mammals, but none of those I read discussed the biology of the moths, their association with honey bees, and the possible evolution of the relationship. For bee-keepers, wax moths (above, upper) can be a problem as their larvae attack honeycombs (above, lower from [4]), while being protected by the silk that they produce. In addition to Galleria mellonella, the most important wax moth for apiarists, another species Achroia grisella is also found and the two have slightly different life cycles in temperate countries: G. mellonella overwintering as mature larvae or pupae in silk cocoons and A. grisella in the egg or larval stages [5].

The association of wax moths with hives of bees is of long standing and was known to Aristotle [6], bee-keeping having been a well-established practice for millennia. Larvae, the only feeding stage of the insect, eat wax and any material that is in close contact with it. They do not destroy nests of bees, but cause a decrease in the efficiency of raising brood and they reduce the output of honey from hives - the silk and faecal material produced by larvae also make an unsightly mess in the honeycomb. Having hives arranged in close proximity, as may be the preference of a bee-keeper, results in an increased likelihood of the spread of wax moths once they have entered one of the hives, a problem familiar to those who investigate pests in monocultures.

The natural history of wax moths is as interesting, if not more interesting, than the use of the larvae as test organisms. It is also fascinating to speculate on how the original association between wax moths and bees came about. Ancestrally, the moths colonised the nest of wild bees, but it is not known when this occurred and it presumably resulted from a sudden shift from feeding on vegetation or animal by-products, the typical diets of moth larvae. The biting mouthparts of larvae were certainly pre-adapted for feeding on honeycombs and the use of silk, common in larval moths, gave some protection from possible attack by the bees. But how did they first invade bee nests and what steps then evolved to allow the more specific association between bee moths and honeybees? This can only be speculated upon and it is interesting that it occurred in two closely-related taxa, G. mellonella and A. grisella. Perhaps speciation of the moths occurred after the evolution of the wax-feeding habit - or is this a case of adaptations evolving in parallel, way before humans came on the scene?

[6] Warren Whitcomb Jr. (1936) The Wax Moth and its control. United States Department of Agriculture Circular no. 386.