Like many people, I enjoy drinking coffee. My preference is for lightly roasted beans and I don't mind whether the coffee is made using a French press, a filter, or a commercial coffee machine.

World-wide demand is such that many countries now produce coffee beans and the resultant crops vary in quality, depending on whether they are grown at altitude, as an understory in forests, in intensive plantations, or by other farming methods. Coffea arabica, the most widespread coffee plant, comes originally from north-east Africa and its global spread has brought problems, with much effort being given to controlling coffee borer beetles and other pests. Spraying of the crop is sometimes needed as there is often no natural biological control of the pests, and monoculture provides optimal conditions for pest transmission. 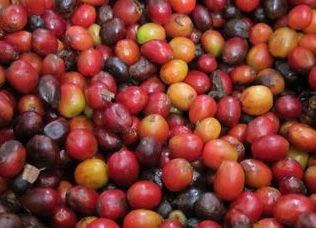 Ripe "cherries" are red, those that are over-ripe are dull brown-red and those that are yet to ripen are green (see above), so hand picking is often the best method of collection. The bean that we roast is contained within the cherry and, in the picture below, a cherry has been halved and the two beans it contains partly removed. The pulp and mucilage that surrounds each are obvious, as is the white parchment-like coating of the bean itself. 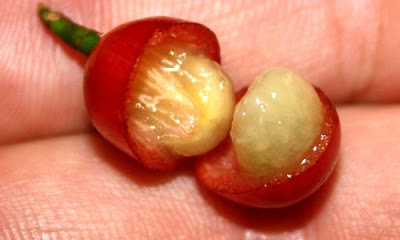 Coffee beans only develop their flavour upon roasting so they must first be extracted from the cherry.  As in many fruits, the soft pulp evolved to protect the bean (seed) from drying, or abrasion, and the mucilage layer provides an extra barrier that also allows easy penetration of the shoot when the seed germinates. Mucilage has many functions in Nature [1] and the layer is important in allowing the production of the famous Kopi Luwak from Indonesia [2]:

Although Kopi Luwak.. ..comes from the Indonesian islands of Java, Sumatra and Sulawesi, it is not its exotic location of origins but rather its unusual and quite unexpected method of production which contribute to its mystique and price. The desire to consume unique food products is a characteristic of passionate coffee drinkers.

So, what is the method of production of Kopi Luwak? The skin and pulp of ripe coffee cherries are naturally sweet and are thus attractive as foods for a number of vertebrates. Among these, the African civet feeds on coffee cherries in north-east Africa, the original home of the plant, utilising the pulp and then depositing the beans, protected largely by the mucilaginous coat, in their faeces. This passage is the basis of the production of Kopi Luwak, and begins with the collection of faeces of palm civets (below, upper) that climb trees and eat the beans in situ. They would originally have fed upon the many other forms of fruit available, but the arrival of coffee plantations provided a new, and concentrated, source of food. Coffee beans are retrieved from the palm civet faeces (below, lower) and are then washed and prepared for export. The collection of faeces from the wild has now been superseded by a battery-farming approach [3], with caged civets being fed coffee cherries, but the beans that have passed through civets are still a very tiny part of the total market for coffee beans. The same is true of coffee beans that pass through Jacu birds [4], that rival the fame of Kopi Luwak. 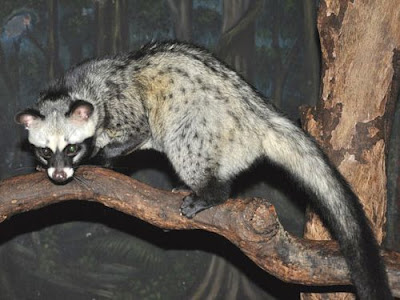 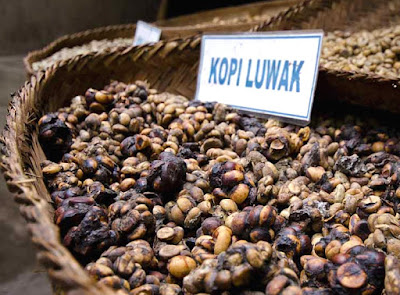 Ingestion of fruits results in the dispersal of seeds, but there are many other methods for this essential process that are more familiar to us:

- Coconuts falling into the sea and being carried large distances to other islands
- The winged seeds of sycamore that we used as "helicopters" when we were children
- The "clocks" of dandelions, with each seed having a parachute
- The explosive pods of gorse that fling seeds large distances
- Seeds of avens with hooks that attach to animal fur

These are just a few examples of a large number of dispersal mechanisms that have evolved and all readers will know of others. However, the passage of seeds through animal guts is less familiar to us, yet we eat many berries and pay little attention to what happens to the seeds they contain. The purple droppings that result from birds eating blackberries, elderberries and other fruits are more familiar, especially to car owners in late summer, but we are less aware that the droppings often contain seeds and that these are deposited in fertiliser, far from the parent plant.

Anna Traveset has reviewed the effect of frugivores (birds, non-flying mammals, bats, reptiles, fishes) on the germination of seeds that pass through the gut of animals and concludes [5]:

In addition to moving seeds from the parent plant to sites that can be suitable for recruitment and seedling growth, frugivore seed dispersers have the capacity to modify the germination patterns of many plants by varying the potential germinability of seeds, the rate of germination, or both.

The effect on germination is complex and depends on many factors, varying also from individual to individual. Each plant is likely to produce many seeds, so the main beneficial effect of having fleshy fruits is dispersal, just as it is for the other mechanisms listed above. All worth thinking about when eating strawberries, or when savouring a cup of Kopi Luwak, This unusual coffee is yet another example of the extraordinary power of evolution and of the ingenuity of humans in taking advantage of natural processes. Is it the best coffee though?

[5] Anna Traveset (1998) Effect of seed passage through vertebrate frugivores' guts on germination: a review. Perspectives in Plant Ecology, Evolution and Systematics 1/2: 151-190.
Posted by Roger at 04:58 No comments:


The Scotney Castle Estate in Kent provides a wonderful example of an English Romantic landscape. The original castle was modified extensively in the early Nineteenth Century (below, upper) and a new house, in a quite different style (below, lower), built on the hill overlooking it. The grounds are beautiful, but the old castle and its moat are the dominant features and can be seen from all the best rooms in the new house, completed on the instructions of Edward Hussey III in 1843. 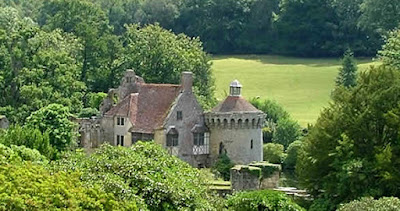 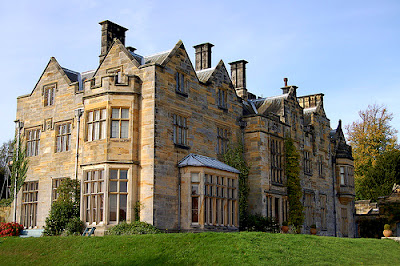 When visiting large houses owned by the National Trust, I always make a point of looking at the titles of the books in their libraries. It is clear that Edward Hussey III, like many of his class in the mid-Nineteenth Century, was interested in Science and Natural History. Among the books in the new house were Jabez Hogg's The Microscope: it's History, Construction and Application (published in 1854), James F. Johnston's The Chemistry of Common Life (published in 1855) and Mrs T. J. Hussey's Illustrations of British Mycology (published in two parts in 1847 and 1855). Hogg's book was very popular at the time, selling over 50,000 copies, and it describes the physics of microscopy; the construction of microscopes; how to prepare materials for microscopy; and descriptions of animals, plants and their parts. It was a comprehensive guide for those indulging in this Victorian passion, and Johnston's work gave some answers to questions about the biology of organisms that were observed, with sections on air and odours; water; soil; foodstuffs and digestion; liquors; and narcotics (!). 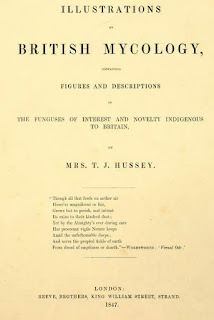 However, it was Mrs Hussey's book that most attracted my attention, as she had a family connection to Scotney Castle. Anna Maria was married to Thomas John Hussey, the son of the Reverend John Hussey, who was the younger brother of Edward Hussey, the grandfather of Edward III who built the new house. Maria (the name by which she was known in the family) was the daughter of the Reverend J. T. A. Reed and the Reed family, like the Husseys, were acquainted with many leading figures of the day in science, including Babbage, Herschel, Fox Talbot and Graves. Both families knew the Darwins of Downe and Maria's younger brother George Varenne Reed was tutor to Charles Darwin's sons [1].

Maria had three younger sisters, all of whom were interested in botany and in collecting plants [2], and she wrote a wonderfully personal journal during a visit that she made to Dover with her youngest sister Kate (Catherine) in 1836 [2]. At the time, Maria was 31 years old, with two young children, and Kate 19 years old. In addition to many visits to the shore to observe marine life, the two collected plants, fossils and other geological specimens during walks in the Dover area, some of which required short trips by boat. There is no mention of her interest in fungi in the journal.

In Illustrations of British Mycology, Maria describes fungi (funguses to her) that can be collected in Britain; the means of collecting them; and how to identify them. It is detailed, accurate and scholarly, with many plates that show the skill of both Maria and her sister Fanny (Frances) as illustrators - montages of some of the lithographs in the book are shown below. We learn from Elizabeth Finn that Maria was not happy with the work of the lithographers [1] and one can only wonder at how good the originals must have been: 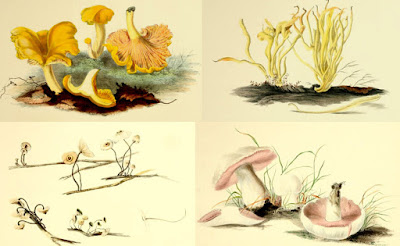 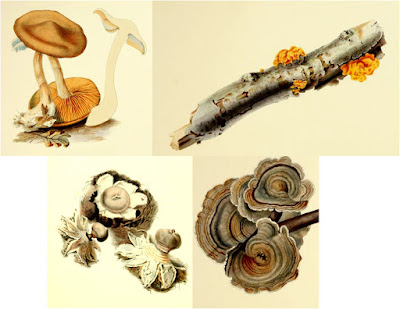 In addition to its value in allowing accurate identifications, the book also conveys Maria's enthusiasm for the subject. Here are two examples of her descriptions, first of toadstools and then of mushrooms [3]:

This splendid Agaric lifts its head boldly, the "observed of all observers", even the most careless so that it is oftener kicked to pieces, and other attentions of the kind bestowed on it, than most "Toadstools" receive: I have mourned over specimens nearly a foot across, their pure ivory gills and glowing scarlet pileus crushed in the dusty road.

The English "Mushroom" proper takes two different forms, according to soil and other conditions of site. The first case is that of rich cool loam districts, such as the extensive grazing pastures where the dairymen of Bucks herd their cows, and which have not been ploughed or mowed within the scope of the remotest tradition; the herbage is kept down by the cattle, and neither rude gravel below, not rank matted grass above, offers obstacles to the regular development of the fairest and most fragile of mushrooms, the very perfection of the thing! no freckles deface the white silky pileus, no thick cottony screen swathes a clumsy stem betokening coarse over-feeding; a light soft veil is all the protection the gills ever had, and they have expanded so rapidly even that has disappeared, or left only a few lacerated fragments on the stem; tender, succulent, friable and digestible, nourished on pure earth, in air redolent of wild thyme and the breath of kine, by dew which might be Fairies' nectar it is so free from the impurities of city miasma..

I do not know if Maria visited Scotney, but I would like to think that she did, as the estate must have been a splendid place for hunting fungi. The presence of her book in the Library indicates that Edward III was likely to have had an interest in this activity, and perhaps in looking at details of fungi using a microscope, and who better than a relative (by marriage) to act as a guide? Judging from her descriptions in the book and in her journal, she would have made a fascinating companion on Nature rambles and she deserves to be ranked alongside Margaret Gatty, Anna Atkins, and Amelia Griffiths, all eminent Victorian Natural Historians.