In her anecdotal history of small-town life in Paignton [1], Peggy Parnell writes of a local outfitter’s business and its progress from a humble start to having several successful shops. Perretts was considered “up-market” and had a year-round clientele, as well as the casual summer trade found in any seaside resort. The company was run by three generations of one family and was staffed with tailors to make alterations to clothes, and shop assistants to “measure-up” and engage in sales patter. It was so different to today’s internet-dominated approach to clothes retailing and, of course, the business no longer exists.

Included in Peggy Parnell’s chapter on Perretts is the paragraph shown below:

Obviously, a tragic occasion as he was only 59 years old, but who was Sid Wotton and, if he left such an impression on the owners and the staff of the company, what was his effect on the public who shopped in Perretts?

Firstly, Sid Wotton had a deep knowledge of outfitting, was unfailingly courteous, remembered returning customers and their requirements, and was very loyal to the Perrett family, as they were to him. Add to these qualities, the ability to make a sales pitch and you have all the essential ingredients of a valuable employee in the old world of retailing. What else do we know about him? 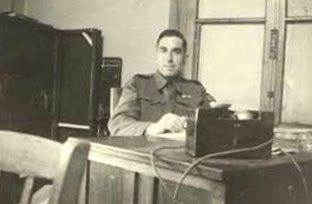 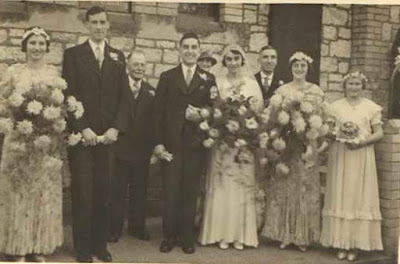 Sid Wotton was born on 17th August 1909 in Princes Street, Paignton, and he remained in the town (except for war service in Belgium, see above) all his life. On 10th October 1934 he married Doris Youlden at Winner Street Baptist Church (see above), attended by both, and where Sid was a member of the choir. In 1933, he had been involved in the selection of a new organist [2] and Sid had a fine tenor voice, singing hymns and oratorios with gusto. In addition to his singing, Sid also spoke at Church garden parties (see below) and it is easy to see that his skills as a salesman were useful if these parties involved fund-raising. 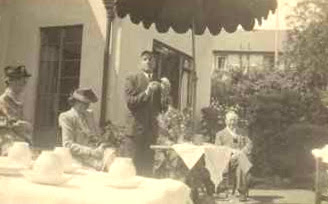 Sid and Doris had three sons, all brought up to attend Winner Street Church each Sunday, and the anniversary of the founding of the church was usually celebrated by a group photograph, like the one below. In addition to his connection with the church community, Sid was a Freemason, becoming Worshipful Master of Torbay Lodge No. 1358. Outside those interests, life revolved around Perretts and the growing family, but then illness intervened. Doris, who was anxious by nature, suffered from uncontrollable hypertension and this led to a stroke from which she died aged 49. This must have been a very difficult time for Sid, especially as he had been diagnosed with diabetes and then developed cardiovascular disease. By 1965 all three boys had left home and we come to the events described by Peggy Parnell. That’s not how Sid should be remembered. 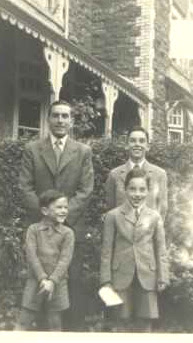 Andy Warhol suggested that everyone should be famous for 15 minutes. I’m not sure that a paragraph in a book counts as fame, especially when the ending is so tragic. Rather, I want to celebrate the Sid Wotton who was such an important person to those who knew him and who showed fine qualities of loyalty and service in everything that he did. It’s all history now, of course, but that doesn’t make celebrating the man any less important.

I would like to thank David Wotton for telling me about the reference to Sid Wotton in Peggy Parnell’s book. 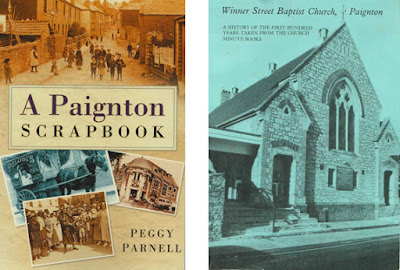 The small village of Cockington in Torbay is very popular with visitors who come to see its thatched cottages, old forge, and many other charming buildings, all nestling in a valley. It was the destination for the last carriage ride taken from his home in St Marychurch, Torquay, by the great natural historian Philip Henry Gosse, accompanied by his son Edmund. The ride, shortly before Henry’s death in 1888, is described very movingly by Edmund in a biography of his father [1,2].

I was brought up in Torbay, so I made the occasional visit to Cockington village as a child, although, as a family, we mostly stayed away from popular places. My fascination with natural history came from family walks in early childhood and it was the alien aquatic world that really grabbed my imagination. While marine organisms of the shore were readily visible - seaweeds, limpets, barnacles - most were hidden until one turned over stones in rock pools, or was lucky enough to wander down to the low water mark during Spring tides.

Childhood visits to the cinema in Paignton to watch films by the divers Hans and Lotte Hass made me aware that there was a natural world of which I knew very little and this added to its fascination. My imagination of this world extended to my play and I remember vividly placing a metal biscuit tin over my face, taking a deep breath and then diving under the bedclothes - nothing interesting was found! Using a snorkel in the sea would have terrified me as, although I was fascinated by what I saw in the cinema and in aquarium tanks, I was terrified of putting my head under water. It was truly an alien world for me and the feeling of wonder that so many aquatic organisms were unfamiliar stayed with me.

Later, I wandered around the coast on my own, looking at rock pools and I also enjoyed walking along country lanes, just for the pleasure of discovering new places, and being re-acquainted with those that were familiar. While I was happiest investigating the seashore, I also looked at the margins of local ponds and streams. On one walk along Cockington Lane - the same lane that Henry and Edmund Gosse had followed in their carriage - I decided to look for animals in the small stream that runs close to the road (see below). The upper part of the Cockington stream is dammed to form ornamental ponds and it then flows to the sea. Curious about what might be living in the stream, I picked up a few stones from the bed and, after examining them for a few seconds, was pleased that flatworms were very common and seemed to be on all the stones that I looked at. I still recall the discovery, even though it was nearly sixty years ago. 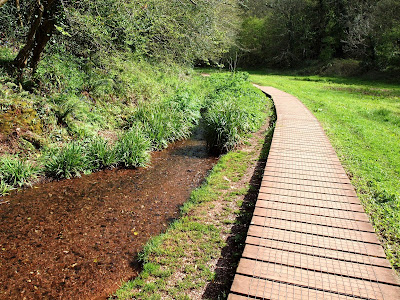 The flatworms were gliding over the surface of the stones and I was absorbed in watching their movement, as it wasn’t possible to see how they propelled themselves. Their locomotion is achieved by the beating of many thousands of microscopic cilia (small hair-like extensions from the cells covering the bottom surface of the worm), cells also secreting a mucus trail on which each worm moves, just as snails do. If watching their movement wasn’t fascinating enough, knowing that freshwater flatworms have remarkable powers of regeneration filled me with even more of a sense of wonder. I didn’t carry out any experiments like those shown in the videoclip below (where the movement of flatworms is also seen clearly) [3], but I knew about this ability. Not exactly like the sort of things that Hans and Lotte Hass filmed, but a fascinating part of the aquatic world nonetheless and to be seen only a short walk from where I lived.

Cockington gets many visitors and it is also a popular attraction for residents of South Devon, but I wonder how many of those having a cream tea, or strolling among the thatched buildings and lovely gardens, then walk back to the sea front along the boardwalk path? And of those, how many decide to look in the Cockington stream and see a quite different, yet fascinating, world? I am guessing that I was always in a very small minority.

[1] Edmund Gosse (1890) The Naturalist of the Sea-Shore: The Life of Philip Henry Gosse. London, William Heinemann.