Our family's box of curios


I mentioned our family's box of curios - a mini "cabinet of curiosities" - in an earlier blog post [1]. The objects in the box fascinated me as a child and provided a connection to exotic parts of the World, far removed from my insular life, but the only contents I could recall were a tiger's claw and some hairs from a giraffe's tail. That may have been because, even as a young child, I had a fascination with Natural History.

Last Wednesday, I visited Torquay Museum to give a talk about Philip Henry Gosse and during the previous evening I was able to visit my brother David who still lives in Paignton, our home town. When reading the blog post [1], he had remembered the box of curios and was sure that it had been stored in the loft of his house after we emptied the contents of our family home during the clear-out after my father died nearly fifty years ago. Why the box was selected to be saved when much else was thrown out was not clear to either of us, but much searching in the loft of David's house didn't turn it up and we left it at that. Then, by looking in another place, the box was found and David was able to show it to me last week. Its contents are shown below. 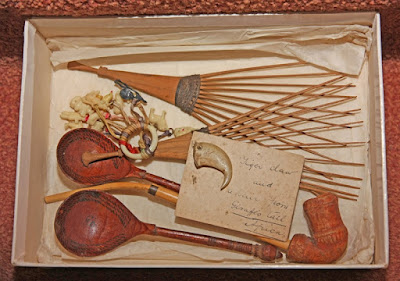 There was the tiger claw and a label mentioning the hair from a giraffe's tail (I'm sure that there were at least three, all having now disappeared). The other curios were a pipe, two combs, two wooden spoons and a ring with plastic "charms" attached by woven threads. The origins of all the artefacts remain a mystery, but it was good to know that most of the contents of the box of curios were still there. When I was very young, they were my introduction to an interest in the fascinating objects found in Museums and similar collections.

The items are shown in more detail below (photographs by David Wotton) – can anyone provide information on these artefacts? 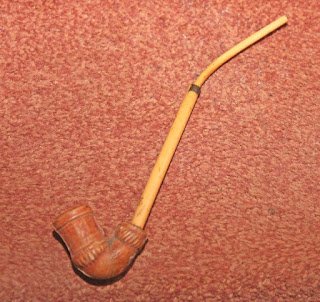 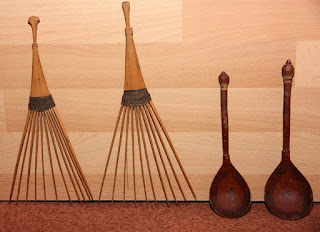 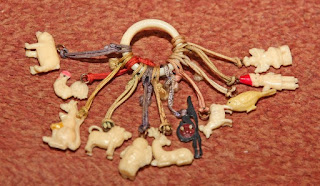 
As many readers know, I admire the contributions to Natural History made by Philip Henry Gosse and have read facsimiles of many of his books. I have also had the privilege of looking through First Editions held in Libraries and Museums and have seen some of the artwork used for illustrations in both books and lectures [1]. Plates by Gosse impress with their vibrancy and accuracy and they enhance the enthusiastic descriptions of organisms and their environment that he gives in the text. Gosse studied organisms in the field, in his aquarium, and under the microscope, and did much to promote these three approaches in the study of Natural History. One can imagine the impact of his publications in the mid-nineteenth century and it is not surprising that Gould described Gosse as the "David Attenborough of his day". In addition to popularising what was to become a passion for some Victorians, he also made important contributions to science and to scientific debate. 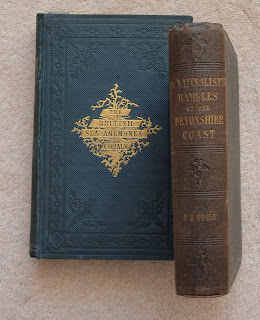 Last week, I received an e-mail from a friend who is reducing the number of books in his library and, knowing of my interest in Gosse, asked if I would like First Editions of A Naturalist's Rambles on the Devonshire Coast and Actinologia Britannica. I was astonished and said "yes" immediately, as these two books contain some of Gosse's best illustrations [2]. They have now arrived and are both in excellent condition, with the plates in their original state (see below). 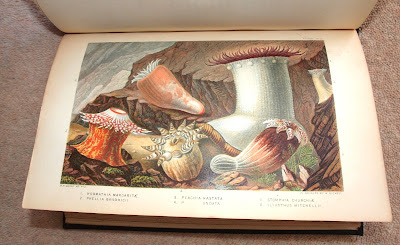 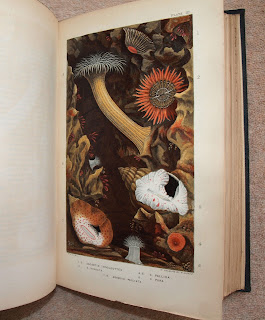 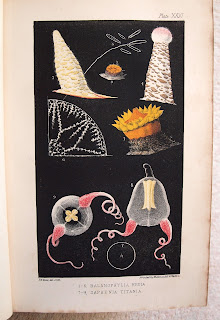 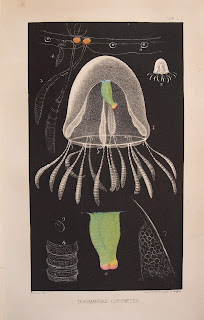 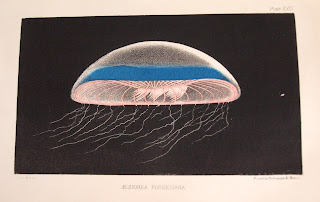 Why do these books from over 150 years ago so impress me? The answer comes partly from my admiration for Gosse as one of the best observers, and communicators, of Natural History, but I also react against the image of the man portrayed by his son, Edmund, in Father and Son [3], that stresses the rôle that religion played in his life and which Edmund found stifling. I like to see fair play and, while not disguising my difficulties with Henry's profound Christian beliefs, I think that he deserves to be recognised in a very positive light.