Amelia Griffiths, Mary Wyatt and a curious phenomenon in Torbay


Mary Wyatt was a dealer in shells and minerals from her shop in Torquay [1]. During the boom in exploring seashores that occurred during the early Nineteenth Century, such shops supplied visitors with important specimens to add to their cabinets of curiosities. Mary Wyatt’s shop was as well known in Torquay as Mary Anning’s shop in Lyme Regis, where fossils could be obtained, as well as other mementoes; the passion for Natural History including rocks and minerals as well as living organisms.

In addition to running, and supplying, her shop, Mary Wyatt collected algae that were dried and pressed, with some of her collections made up into volumes published as Algae Danmonienses - illustration by dried specimens resulted necessarily in a very limited number of copies being produced [2]. None of this would have been possible without the close co-operation of another famous resident of Torquay, Amelia Griffiths (1768-1858) [3], the subject of an essay by Philip Strange and a biographical note by Ann Shteir. From their articles [4,5], we learn that Amelia Griffiths was born Amelia Warren Rogers on 14th January 1768 and married a vicar, William Griffiths, in 1794. He died in 1802 and she then raised her five children on her own, eventually settling in Torquay in 1829, where Mary Wyatt was one of her servants. By this time, Amelia was already well known for her knowledge of algae, their locations and their biology, and she corresponded with many of the leading authorities of the day.

The more I investigated the story of Amelia Griffiths, the more I found similarities with Mary Anning. Both were systematic collectors, acquiring immense expertise in their fields and passing on samples to male scientists who furthered their own careers as a result. Both were strong women who pursued their interests whether or not these conformed to norms of society. Griffiths is known to have collected at Lyme Regis so perhaps she encountered Anning on the beach; it is an interesting thought. Anning is now better known, partly because her discoveries were much more significant for science and partly because of the well developed Mary Anning-industry in her home town.

Algae Danmonienses, with its limited number of copies was unlikely to spread the fame of Amelia and Mary and, while Amelia corresponded with many botanists, she produced few articles – Shteir [5] mentioning only two notes to The Phytologist and a list of Natural History specimens in Blewitt’s The Panorama of Torquay [6].

She was certainly well-known and respected in Torbay and Blewitt wrote:

The article on Natural History will be acceptable to all, containing, as it does, the most recent of Mrs. Griffiths’s truly beautiful discoveries in the difficult department of marine botany..

Blewitt also describes an interesting phenomenon at Elberry Cove in Torbay in which Amelia’s expertise was called upon [6]:

At a short distance from the beach, the surface of the water presents a curious phenomenon. A fresh-water spring, rising of course in some part of the chain of hills above the cove, makes its exit from the sandy bottom, about eight or ten feet below the surface of the sea at low water mark.. ..It ascends perpendicularly with considerable force and forms a smooth circle, four or five feet in diameter, on the surface of the sea. Two of these circles are occasionally seen, in consequence, perhaps, of the accumulation of sand; and their size, depth, and distance from each other vary at different times, according as they are influenced by the swell or weather. They are of course best seen at low tide and when the sea is smooth. In April of the present year, we made some experiments in conjunction with Mrs Griffiths, in order to ascertain the character of the water ejected by this spring. The result was satisfactory, and proved that it was a body of fresh water pouring out of an aperture of large size, and with such strength that the sand disturbed was forced by its power to the surface. The appearances within the circle resembled the effect of oil poured on the water.. ..[and] The volume of fresh water must be considerable as the salt taste of the sea perceptibly diminishes in the neighbourhood of the spring. This phenomenon will be visited by the natural philosopher with much pleasure..

Quite what experiments were carried out by Amelia Griffiths are not known – apart from tasting the sea water! 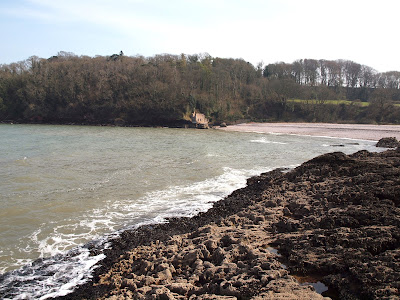 Having been brought up In Torbay, I made many visits to Elberry Cove (shown above at a time of far from ideal conditions) but never recall seeing the upwelling from springs that is described by Blewitt. Perhaps they no longer exist?

[1] M. Rendel (1994) Women in Torquay in the First Half of the Nineteenth Century. The Transactions of the Devonshire Association 126: 17-39

[6] Octavian Blewitt (1832) The Panorama Of Torquay, A Descriptive And Historical Sketch Of The District Comprised Between The Dart And Teign. London, Simpkin and Marshall + Torquay, Cockrem

Poohsticks, Mr Trump and being a child-like researcher

I have no idea whether this guidance is to be taken literally but, if so, and if I was a Christian believer, I would need to think twice about the enjoyment of games that adults are meant to have “grown out of”. One of the many pleasures of becoming a parent is that we can legitimately enjoy these games once again as our children grow up. 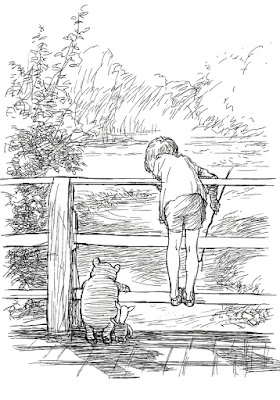 One that I still play is Poohsticks, described by A. A. Milne in The House at Pooh Corner [2] and demonstrated in a wonderful drawing by E. H. Shepard of Christopher Robin, Pooh and Piglet playing the game (see above). As is now well known, Poohsticks is for two or more players, each of which selects a stick. On command, each player drops their stick into a river from the upstream side of a bridge and the first stick to appear on the downstream side of the bridge decides the winner.

Last week, I was walking on Boxmoor in Hertfordshire where a bridge crosses the River Bulbourne and, as on other occasions, the child in me could not resist playing Poohsticks. Necessarily, I played against myself and took two twigs and threw them in to the water and I didn’t much care which one came out first as I was the winner anyway. Both twigs eventually became tangled up, together with other vegetation, on a small tree trunk that had fallen across the river. While watching the fate of the twigs, I also notice that a submerged horse chestnut leaf was being carried downstream, but it was moving slowly compared to the twigs. As someone who spent a career looking in streams and rivers, I already knew that there are many methods by which vegetation becomes trapped, and thus retained to provide nutrients after decomposition, and I also knew that water flows more rapidly at the surface than in the water column (illustrated crudely below: higher in the water column the influence of friction from the bed becomes less). 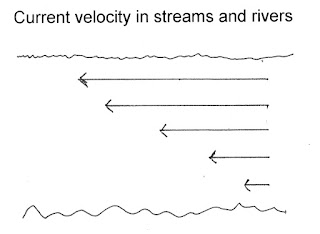 Playing Poohsticks, in addition to allowing me re-entry to the joys of childhood, resulted in observations and questions for which I was able to provide answers based on acquired knowledge. When conducting original research, it is always helpful to ask questions like those inspired by child-like curiosity and I admit that there were several occasions in my career when I had the “look at that!” or “what’s that?” response that one might expect of a five-year old. The result was sometimes questions that could be framed into hypotheses and null models that were testable (using the best Popperian method), although I was always aware that complex biological systems have probability at their core, rather than just the absolute laws of physical science.

The main lesson to come from all this is that I Corinthians 13:11 must not be taken literally and we should all be child-like in the best sense, not like the childishness of Mr Trump that has recently grabbed the headlines [3]. Being child-like keeps us open to serendipitous discoveries and, as we know, many of those “accidents” have led to important steps in understanding the world around us. I always encouraged students to be child-like and to be amazed, and thrilled, by living organisms and their way of life. I can't help it.

[1] I Corinthians 13:11 in the Authorised King James Version of The Holy Bible. 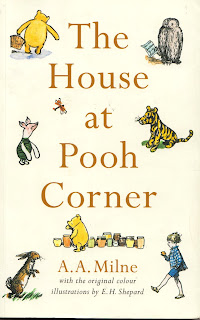