Ten years ago, I had a holiday in Denmark with my wife and daughter and we spent a few days in the wonderful city of Copenhagen. As we wandered along the waterfront, I noticed that there were large amounts of foam accumulated at one end of a dock and I started explaining (how typical of an academic) that this was the result of natural processes and not pollution. We were surprised to then turn round and find a TV crew just behind us. The reporter had been sent to cover the appearance of the foam and she had overheard my comments and asked me to talk about the origins of the foam to camera. I explained that, although the accumulations look unpleasant, they disperse and do not usually create a bad odour.

In contrast to this small accumulation in Copenhagen, sea foams can be of much larger dimension, creating banks of foam over a metre deep on shore, with winds carrying the flocs inland. One genus of algae is well-known as the origin of foams - Phaeocystis. These algae are found as single cells or, commonly, in large groups embedded in a globe of transparent mucus (see below). When nutrients are plentiful, and when day length increases, the excellent conditions for algal growth result in blooms. Excess carbohydrate, resulting from photosynthesis, is exuded from the cells to form a field of exopolymers 1 around each cell and, in Phaeocystis, the exudates from cells combine and a globe of mucus results, in which individual algae become embedded. The globe protects individual cells from capture by herbivores and acts as a means of retaining nutrients close to each cell. As the mucus consists largely of water bound within a matrix of carbohydrate to give structure, it is energetically cheap to produce. 1 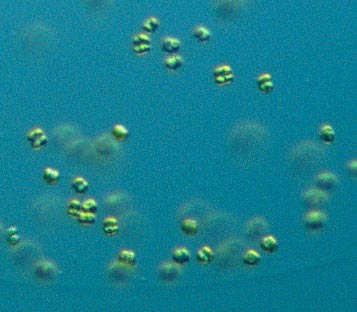 So, how does Phaeocystis contribute to masses of sea foam? Let’s begin with an analogy. When we make meringue, we whip transparent egg whites (mainly protein in water) to include air, and the masses of tiny bubbles that we create are trapped within the developing meringue, each coated by some of the protein. The trapped bubbles then give the whole its white appearance. Now back to Phaeocystis. When huge numbers of globes at, or near, the surface of the sea are whipped up by waves, the mucilaginous colonies are broken up and their organic matter covers bubbles, so the whole becomes whisked into foam. The more algae, the more foam, and it is easy to see how this light, floating mass can then be blown ashore. Like all foams, it consists largely of gas and is white because of all the bubbles that are included, although green or brown colouration sometimes occurs. This is because algae or brown organic compounds are also bound into the mass, or become stuck to its surface. 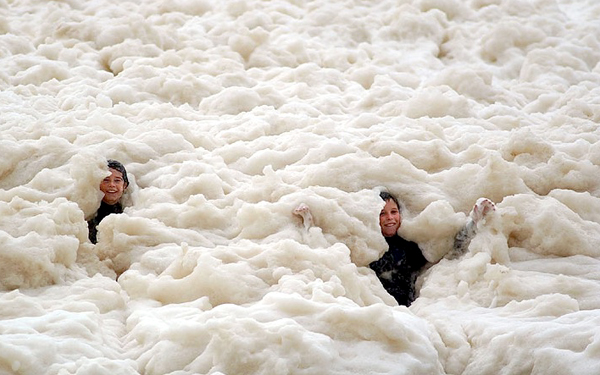 All surf creates foams because bubbles are covered with the organic matter that accumulates at the water surface and this means bubbles do not collapse instantly, like those produced by shaking tap water vigorously, for example. We’ve all seen the white masses of coated bubbles that form when waves break, but the huge accumulations that can occur after Phaeocystis blooms are in a different league.