Some small animals walk on water, among the best known being the pond skaters that row themselves over the surface using four of their six legs. Close observation of water bodies reveals the presence of other insects like springtails, which move as though the water surface was part of their usual terrestrial habitat. As we know from childhood experiments with floating pins, water has high surface tension and this is strong enough to support light objects, including these animals.

When looking at ponds, we are sometimes surprised to see snails gliding along the surface, this time on the water side of the interface. They move using muscular contractions of the foot on a trail of mucus and this seems to work just as well at the water-air interface as it does on a solid surface and is again dependent on surface tension. The water-air interface also supports large numbers of bacteria and other single-celled organisms like amoebae and their relatives, but we need powerful microscopes to see their presence. They have also been shown to move here as though they were on a solid surface. 1

Dust, and other particles, fall on the air side of the interface and a variety of compounds accumulate on the water side, among which will be those that do not mix readily with water, like fats. These materials provide food for the bacteria found at the interface, and bacteria, in turn, are the food of the other single-celled organisms. Nutrients present also provide good conditions for the growth of algae and, as there is rarely a shortage of light for photosynthesis, algal colonies can also be found. Organic matter, both dead and living, thus forms a surface film that is very thin, but which covers about 70% of the surface of the Earth and, while in some habitats this film is rather poorly developed, in others it is sufficiently thick to produce visible slicks, sometimes thought by observers to be the result of a pollution incident. Surface films can also be blown into foams by the inclusion of bubbles and we have all seen windrows on the surface of the sea, or large lakes, after strong winds have abated.

In addition to the “permanent” residents of the surface film, other animals use this resource as food. For example, I have watched grey mullet feeding at the surface of the water in the harbour at Muros in Galicia and these fish have special adaptations of the gills that enable them to capture and concentrate fine particles. They are thus well adapted to collect the nutritious resources present in the surface film, in addition to those found elsewhere within the water column. 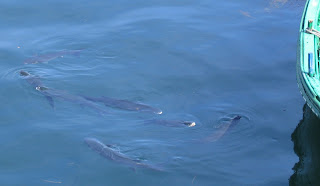 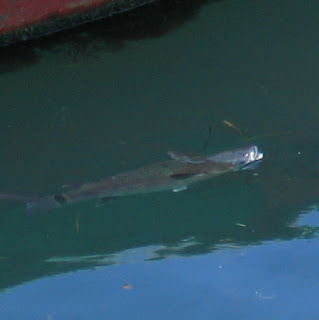 Perhaps the best adapted animals that feed at the water-air interface are the larvae of Anopheles mosquitoes. These insects have hydrophobic hairs on their bodies that ensure they remain attached at the surface until they break away by swimming downwards into the water of the ponds and lakes in which they live. Once anchored at the surface, the head of an Anopheles mosquito larva is rotated through 180 degrees and it then uses its mouthparts to produce a current that draws surface film material near the mouth. The larvae feed from this and surface film provides the majority of their diet, allowing rapid growth. Larval life is then followed by pupation and the emergence of adult flies, the females of which are important biting pests. Adult female Anopheles mosquitoes are the vectors of malaria, one of the most widespread lethal, and sub-lethal, diseases of humans, so the surface films on the ponds and lakes where the larvae live are important in maintaining the incidence of the disease.

In an article in the magazine BioScience, Terry Preston and I described surface films as being overlooked and that can be interpreted in several ways. 1 While their total volume makes up a miniscule fraction of the total volume of water on Earth, they are present at all interfaces between water and air and thus have an enormous total area. Surface films are ubiquitous, yet we only notice their presence when slicks or foams are present, or we see animals moving at the interface. They are also largely ignored by aquatic scientists and deserve much more attention. Perhaps that attention will come when a human achieves the impossible and walks on water without an artificial aid? After all, we are told that it has been done once before: “....when Peter was come down out of the ship, he walked on the water.....". 2