I love northern Sweden. There is something about the forests, mountains and rivers that I find very attractive, with the contrast between the long days of summer and the short, very cold days of winter bringing something to the mix. However, there is a downside and that is the number of biting flies, with females that need to take a blood meal before they can mature eggs. I’ve been their target on many occasions and easily the worst was while I was collecting aquatic animals in a small stream, part of a research project in which I was involved. I knew there were mosquitoes around, but it became really bad and I had to turn up the round neck of my jumper and pull down my woolly hat so that no area of my face and neck was exposed. Despite these precautions, I still received many bites and I could hear the constant “singing” of the mosquitoes. I was very pleased to get away from there.
As Henry Gosse wrote in The Romance of Natural History,1 “One needs to spend a night among musquitoes to understand what a true plague of flies is” and, in that book, he also introduces us to the Golubacser [Golubatz] fly (which he identifies as Simulium Columbaschense [colombaschense], a blackfly). Gosse quotes the comments of a traveller (Edmund Spencer):

These singular and venomous insects, somewhat resembling musquitoes, generally make their appearance during the first great heat of the summer, in such numbers as to appear like vast volumes of smoke. Their attacks are always directed against every description of quadruped, and so potent is the poison they communicate, that even the ox is unable to withstand its influence, for he always expires in less than two hours. This results, not so much from the virulence of the poison, as that every vulnerable part is simultaneously covered with these most destructive insects; when the wretched animals, frenzied with pain, rush wild through the fields till death puts a period to their sufferings, or they accelerate dissolution by plunging headlong into the rivers.

It is worth remembering that only female blackflies bite and they inject saliva which contains anticoagulants to ensure the flow of blood. It is likely that the quadrupeds that Spencer describes were tormented by the number of bites, the shock that the mass of bites promoted, and an immune response to the insect saliva. Humans bitten by blackflies are also familiar with these reactions. The “vast volumes of smoke” may refer to the numbers of female flies, but is more likely to be a description of the mating swarms formed by the non-biting male flies to attract females.

Roger Crosskey, the authority on blackflies, describes the area of Banat on the Danube as being the principal area for these flies, that “excited much interest in the eighteenth century” 2 and that embark upon “their massive wind-assisted migrations across country - reaching southwards deep into Serbia and eastward into Romania, and sometimes killing animals 150 km and more away from the Danube.” Fortunately, both for humans and their livestock, the fast-flowing sections of the river that were the habitat for many millions of Simulium colombaschense larvae have been transformed by dam-building and the insects are no longer devastating pests. However, there are many regions of the World where major pest outbreaks of other blackflies occur, although few with the notoriety of the Golubatz fly.

Biting midges (ceratopogonids) are another group of flies that can reach pest proportions in high latitudes and their miniscule size belies their effect when attacking in numbers. Again, it is the female flies which bite, but neither male nor female flies of their relatives, the dancing midges (chironomids) and lake flies (chaoborids), need to take a blood meal, although many people are not convinced of the fact. Both types of flies are found in staggering numbers in some locations.

Lake Myvatn (Myvatn = midge lake) in Iceland is rich in algal nutrients and is thus highly productive. Dancing midge larvae take advantage of the abundant food (algae + algal and microbial by-products) and grow in astonishing numbers before pupating and then swimming to the surface of the lake, where they emerge as adults and begin flying. There are so many of them 3 that domestic animals are provided with shelters in which to escape the torment of being surrounded by the flies and the dangerous risk of inhaling them. Although the flies do not bite, males form smoke-like swarms to attract females, just like the blackflies in Gosse’s quote, and livestock may provide suitable swarming marker sites, as there are no trees. 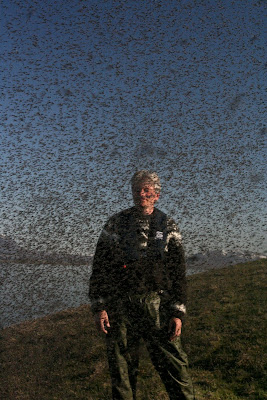 Lake flies may also be found in huge numbers, forming clouds of insects over Lake Victoria, for example. 4 The larvae of these insects feed on plankton in the surface waters and, just like the dancing midge larvae of Myvatn, they transform to pupae that swim to the surface to allow emergence of the adults. Such large numbers of flies occur that they are collected by villagers around the margins of the lake and made into “Kungu cakes” that are piled on market stalls and provide a good source of protein - flies carried by winds may also be the source of manna (as described in The Bible). 5 The cast skins of the pupae, just like those of dancing midges, are washed ashore and these provide fertiliser, as do the millions of dead insect bodies, including those of females that have laid their eggs into the water to complete the life cycle. 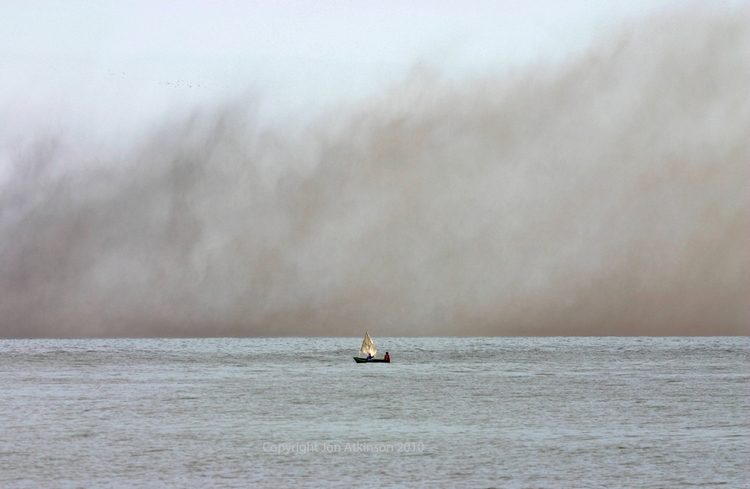 Dense swarms of blackflies, biting midges, dancing midges and lake flies are natural, but it would be surprising if mythologies did not develop about their significance and that a divine force was responsible for their extraordinary quantities. In some years, conditions are such that even larger numbers of flies are produced than usual and this can result in the idea of plagues that are somehow sent to punish because of their adverse effects. The 10 Plagues of Egypt are among the most well-known of these types of events, with dancing midges, blackflies and mosquitoes likely to be the source of three of the Plagues, occurring because of unusual climatic events over a short time period.6 We humans love to explain impressive natural phenomena in terms of the supernatural, when we should really be in awe of the evolutionary processes that have resulted in the successful exploitation of resources. However, we seem to prefer being imaginative rather than rational and “plagues” threaten our sense of control over the Natural World.