The power of religious conversion

A religious conversion is usually transformative. Having been brought up as a Christian, and having attended evangelistic rallies, I have often wondered what happens in people’s minds during that process. Some insights are given in “testimonies”, but these are often full of clichés and not very helpful to understanding. 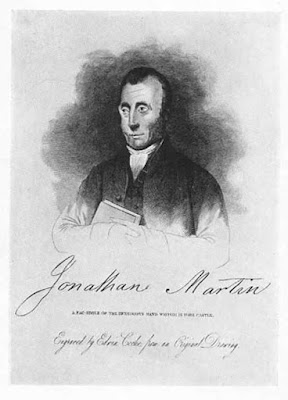 Jonathan Martin (above) gives a description of his conversion in his autobiography [1]:

The first Love feast [a gathering of Christians to share bread, water and prayer] that I attended was at Yarm; my soul was dismayed and filled with unbelief, and I wept sore and would not be comforted. My brethren fell on their knees and prayed with me, but their prayers were of no effect. I went home and went to bed sorrowful, not having found the blessing of which I had aforementioned dreamed..

..My religious friends were often enquiring if I felt the Witness of the Spirit, to which I replied that I did not and would not, till the time came.

At the end of five months, I took the Sacrament in the Church at Stockton, and leaving it at half past one o’clock, I hastened to Yarm, where the lovefeast was to commence at two o’clock. I had only had an hour to go four miles, but I was running for a prize, and was determined not to be late..

..I arrived before the first prayer was finished, and was not five minutes on my knees till the Lord set me at full liberty, and here too he shewed me that I had indeed met with the people among whom I must find my way to glory..

..The next night I was invited to a Prayer Meeting at Norton, the Room we occupied was nearly full, and while the Class Leader was giving out a Hymn, The Spirit of God came down in such abundance into my heart, that I was ready to leap over the Table for joy.

Clearly a profound, and transforming moment for Jonathan, but who was he and what were the consequences of his conversion?

Fenwick Martin, Jonathan’s father, was a tanner (but had many other jobs) and was known as an excellent swordsman. He eloped to Gretna Green with Isabella Thompson, the daughter of a landowner who did not approve of Fenwick, and they went on to have thirteen children, only five of which survived to adulthood [2]. The five children were all born in different towns and villages, a result of the itinerant lifestyle led by their parents. Fenwick loved travelling from place to place [2].

Jonathan was the third child - a sister and brother were to follow him – and he had a birth deformity, being tongue-tied. This was cured by cutting the membrane holding the tongue to the floor of the mouth when he was "in his sixth year", something that resulted in a speech impediment for the rest of Jonathan’s life [2]. This early experience must have troubled him, as his inability to speak as a young child meant that he was isolated and he often walked alone in the countryside. He was self-educated and could read and write, but he was apprenticed to a tanner in Hexham, following one of this father’s professions. He also took after his father in having wanderlust and he was determined to see something of the world when his apprenticeship ended in 1804. In London, he was press-ganged into the Royal Navy, serving on the H.M.S.Hercules (where he was amazed that the Captain ordered bands to play on a Sunday, offending his religious beliefs) before being transferred to another ship that had been captured as a prize. At Cadiz:

..he had many narrow escapes from the shore batteries, and this made him “begin to see his lost ruined state as a sinner, and to cry to God for mercy and salvation, hoping He would spare him to return to his native land, when he would join himself to the people of God”, i.e. the Wesleyan Methodists [2].

Shortly after, Jonathan jumped ship and sailed in a merchantman for Egypt and returned via Sicily to Portsmouth, where he was paid off. In this last journey, a rogue wave in the Bay of Biscay nearly sank the ship, a scene illustrated in Balston’s biography [2] (see below). From Portsmouth, Jonathan travelled to London and then back to the North-East of England where he returned to work as a tanner. He married in 1814 and had a son, Richard, who was named for one of Jonathan’s brothers. 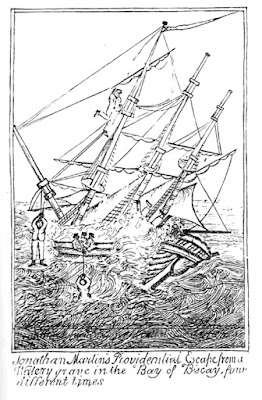 We now reach the time when Jonathan went to the love-feast in Yarm and his conversion, as described in the autobiography. He went on to develop an intense dislike for the Church of England and his life became guided solely by messages from God, sometimes coming in dreams [2]:

The Wesleyan Methodists were so alarmed by his conduct that they expelled him from their Society, and Mr page [the tanner] dismissed him from his employment. But he felt the peace of God in his soul, and was not discouraged.

Over the next months he moved around to get work and maintained his hostility to preaching in the Church of England, even attempting to interrupt sermons. On hearing that the Bishop of Oxford was to hold a confirmation at Stockton, Jonathan decided to attend. He had previously borrowed an old, broken pistol from his eldest brother, which was discovered by his wife. On being asked what the old weapon was for, Jonathan replied that it was to be used to shoot the Bishop. His wife subsequently removed the pistol and Jonathan went to the service in Stockton without it – however, she reported Jonathan’s “intention” to the Church authorities and he was subsequently arrested and appeared before the Justices at Stockton who, on getting some typically strange answers to their questions, “ordered him to be confined in a madhouse for life”. Jonathan was then conveyed to the West Auckland lunatic asylum. 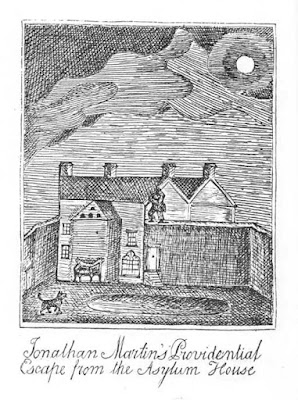 Balston [2] gives us an account of Jonathan’s life in the asylum, where he suffered at the hands of both fellow inmates and, on occasion, from the asylum owner. He was transferred to the asylum at Gateshead, where he had an ambivalent relationship with the owners, just as he had at West Auckland, and eventually escaped from there via the roof (see above). Jonathan wandered through the countryside and was exhilarated at being free, visiting a distant relative of his mother, who made him welcome. Unfortunately, his wife had died of breast cancer in 1821, so he could not return to her and he travelled widely through the North of England and Scotland. Jonathan was able to earn some income as a tanner and from hawking copies of his autobiography while on his journeys. The first edition was published while Jonathan was in Darlington in 1825, a second being printed in Barnard Castle in 1826, with a third in Lincoln in 1828.

It was in Lincoln that he married Maria Hudson and Richard, who had been lodging with Jonathan, was then sent to a boarding school. Jonathan was readmitted to the Wesleyan Methodist Society and he retained the fervour, and convictions, so clear to him at the time of his conversion. With Maria, he travelled to York, arriving on 26th December 1828, and it was Jonathan’s activities in York that led to his widely-known notoriety. It began with a series of letters (all with Jonathan’s idiosyncratic spelling [that had been corrected in the autobiography]) attacking members of the clergy in the Church of England for their indulgent lifestyles and complacency, but none received a reply. Jonathan was further angered by this, stating [2]: “I found the Lord was determined to have me show this people a warning to flee from the wrath to come.”

He devised a plan to carry out his threat and, on 1st February 1829, he entered York Minster and, after kneeling in prayer, was directed to go to the bell loft, where he remained when the Minster was locked up for the night. Balston [2] details what happened next and, in summary, these consisted of Jonathan gathering flammable materials and setting them alight – all guided by the reassurance and direction that he gained from God through prayer. He escaped though a window and the resultant blaze burned through the night, destroying part of the roof and the interior of the eastern part of the Minster, including the Archbishop’s throne. 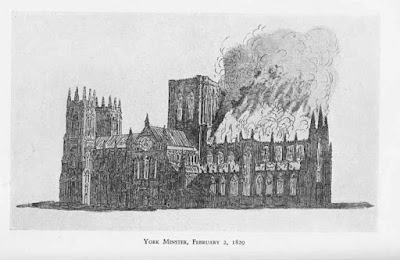 After this disaster, a group of clergy and magistrates met to discuss how the fire occurred. They concluded quickly that the fire was the result of arson, the rope ladder used by Jonathan to climb to a window having been discovered, and the culprit was identified after questioning people who had met him. The letters were also produced and an arrest warrant for Jonathan was issued, with a reward of £100 for his capture. He was eventually tracked to Codlaw Hill and was taken to the “House of Correction” in nearby Hexham. From there he was taken to the jail in York and appeared before the Grand Jury at the Guildhall on 23rd March 1829, an event so popular that there was a melee over the available seats and it was agreed that a more fitting location would be the County Assizes, commencing on 30th March.  On being charged with setting fire to the Minster, Jonathan replied [2]: “It was not me, my Lord, but my God [that] did it.” The trial proceeded, with many witnesses who knew Jonathan being called; the letters he had written being admitted as evidence. The jury returned a verdict of “not guilty on the grounds of insanity”, with Jonathan detained during His Majesty’s pleasure. He was sent to London and was eventually confined in the Hospital of St Mary of Bethlehem (“Bedlam”), dying there in 1838, aged fifty-six.

Was Jonathan insane? There are many cases where people commit acts after praying, or believing that they are receiving a message from God. Does this mean that all those who act on such impulses are insane? Would Abraham have killed Isaac on the orders of God if an angel hadn’t intervened [3]? Did Jonathan Martin have a breakdown, as Matthew describes it in his biography [4]?  Do visions and these powerful religious impulses come from mental breakdowns? Does religious conversion follow a kind of breakdown, or heightened emotional state, where rational thought is suspended?  When does “hearing God” become “hearing voices”? I ask these questions as an atheist and I’m puzzled.

P.S. The preface to Balston’s biography of Jonathan Martin is written to Edith Sitwell who had published her English Eccentrics eleven years earlier in 1933. Did he feel that Jonathan would be a worthy candidate for entry into a future edition of Sitwell’s book?