Jo Atherton makes beautiful prints (below) from plastic flotsam and jetsam gathered from the shore. The first time that I saw them I was reminded of natural aggregates within water bodies, perhaps because these were a research interest of mine [1]. 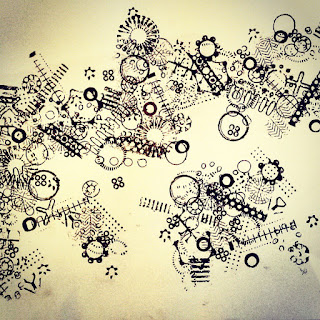 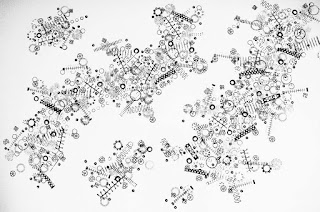 Marine aggregates vary in size, from the minute (a few micrometres across – the scale bar in the micrographs below shows 2 micrometres [with acknowledgement to Ransom et al., 2]) to masses that are visible to the naked eye and which can coalesce to cover water bodies. The aggregates are bound by organic matter produced by algae and bacteria [1] and many sink through the water column and end up on the bed of oceans, especially after storms. Waves generate many billions of bubbles and these enhance the aggregation process, although it also occurs within the water column from collisions brought about by currents, turbulence, and biological processes. 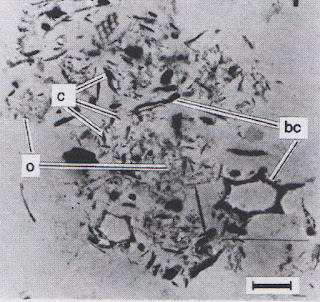 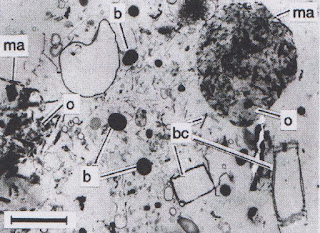 Jo's Anthropocene Prints complement her Flotsam Weaving [3] that uses plastic rope, Lego figures and many other anthropogenic materials that float around the oceans and drift on currents before coming ashore or being washed up by waves from the shallow continental shelf. Anyone making a sea crossing will be familiar with flotsam; large-scale ocean currents gather this material and transport it very large distances. Recently, we have been made aware of this by the findings in the western Indian Ocean of fragments of Flight MH370 that crashed into the sea near Australia and impressive amounts of material from the Japanese tsunami of 2011 have also been washed ashore along the west coast of North America. This is movement of plastics and other anthropogenic materials on a large scale and much will have sunk to the sea bed, a process aided, for tiny fragments, by the aggregation process I mentioned earlier. 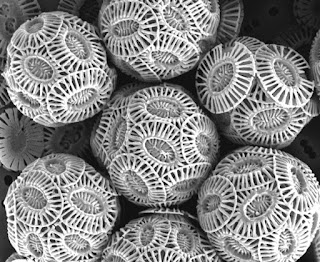 The transfer of matter to the ocean floor from the water column is a continuous process that has occurred over very long periods of time; sediments being laminated and eventually transforming into rock. We are familiar with massive chalk deposits like the White Cliffs of Dover, but less familiar with how they were formed. Much of the chalk comes from calcium salts present in quantity in ancient oceans, much as they are today. However, the chemical was deposited having been extracted by organisms that use(d) it to form protective coatings, the most important being the single-celled coccolithophores (above). It is hard to imagine the number of "shells" falling to the ocean floor, and for how long deposition took place, to accumulate the large deposits of chalk found around the world. All this calcium would have been transferred from the water column in the form of aggregates containing the "shells" of these minute creatures. As many gardeners know, chalk deposits contain flints and we think that these have a quite different origin, being rich in silicon and probably originating from the casing of diatoms (single-celled algae that build these extraordinary glass-like frustules, below), or from siliceous spines, or webs, produced by some animals. After death of the algae, their coats become enmeshed in aggregates and slowly sink to the ocean floor where they become concentrated in some areas and mix with the other silicon-based biogenic materials. The process by which these concentrated masses are transformed into flints is poorly understood. 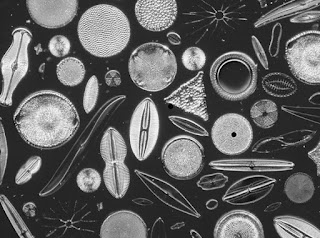 Limestone is even more abundant than chalk and consists of calcium salts, but with origins in marine shells, corals and the calcareous structures created by a whole range of creatures. Most of these were bottom-dwelling, although some lived in the water column and sank after the death of the animals that produced them. Imagine a shell beach being compacted over time and you get some idea of how limestone was formed, and the model becomes even more realistic if one includes all the other fragments that become washed up. This process occurs underwater as well as at the ocean margins.

Future chalk and limestone deposits will be rather different to those of the past. Those being laid down during the Anthropocene, will not only contain natural materials, but much that is anthropogenic. On the substratum, organic matter is broken down and re-utilised through the microbial community and onwards up a food chain, but plastics are much more resistant to breakdown. If humans, or their evolutionary successors, survive to investigate the geology of Anthropocene rock deposits they will be surprised at their content and at the origins of some of the components. It is also possible that the effects of heat and pressure over very long time periods will transform some of the plastics into oil - returning them from whence they came...

Please take a look at Jo's work [3] and I am sure that it will inspire you as it has me.