Capital punishment and the tragedy of Edith Thompson


It is easy to kill micro-organisms, plants and invertebrates and even a pleasurable act when these cause infestations. I find it more difficult to kill many vertebrates, especially mammals and, when writing the blog post about Taking Life [1], my thoughts turned to the theoretical consideration of whether I could kill another human. The answer was a clear "No" and that extended to warfare, even when individuals are removed from their background and one has no knowledge of them, or of their family and friends. I'm not sure that I could live with the thought of having killed another human, even when my own life was threatened. It's not an assumption that I am keen to test.

As a result of my views on killing other humans, I am firmly against capital punishment, yet recognise that it is practised in many countries and has been for centuries. Indeed, one of the most famous examples of capital punishment occurred two thousand years ago with the crucifixion of Christ and the religion would not exist if Christ had not been killed and then risen from the dead. From this perspective, capital punishment is fundamental to Christianity and provides an exception to the moral code of the Judaeo-Christian tradition given by God in the Ten Commandments [2]. 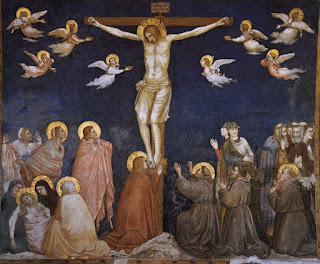 The crucifixion of Christ was carried out alongside that of two other "criminals" (omitted by Giotto in the fresco shown above) and it was intended as a spectacle, this being the custom of the time. Executions continued to be held in public in Western countries until recent times and they occur today in the Middle East and elsewhere, both as a warning and as a form of macabre entertainment. Of course, I refer here to state-sanctioned murder, rather than the execution by terrorists of hostages, or of citizens who are deemed to be out of line with a religious or political principle. Capital punishment is a deliberate act of killing, usually carried out weeks and months after a trial and, bizarrely, in countries like the USA, this delay can extend to decades.

Capital punishment requires an executioner (or executioners). Firing squads have traditionally involved a number of shooters, some of whom have live ammunition and others blanks. This lessens a sense of responsibility for taking life when the executioners are coerced into having to take part. In most other forms of capital punishment there is one executioner and they may be remote (as in lethal injection, gassing, or electrocution) or be involved directly (as in beheading, the use of the guillotine, and hanging). The latter executioners know only too well that they are responsible for taking the life of another human and do so legally.

Hanging remains one of the most frequently used forms of capital punishment and, while the act is usually witnessed by prison officials and some others, it is mostly carried out in private. In some high profile state killings, the execution has been recorded on film or video to serve as confirmation that the act has taken place, but this is exceptional. There is a tradition that hangmen used by the state (are there any hangwomen?) are selected for their knowledge and ability to ensure clinical dispatch and some learn these skills from within a family tradition of having the role, learning by stages until able to perform a hanging themselves. How are they affected by the experience?

The following quote is from a BBC article [3] that includes an interview with Sabir Masih, a hangman in Pakistan:

"I feel nothing. It's a family thing. My father taught me how to tie the hangman's knot, how many coils etcetera, and he took me along to witness some hangings around the time when I was being recruited."..

.."My only concern is to prepare him [the victim] at least three minutes before the time of hanging. So I remove his shoes, put a hood on his face, tie his hands and feet, put the noose around his neck, make sure the knot is placed below his left ear, and then wait for the jailer's signal to pull the lever."

There is no pre- or post-hanging psychological counselling for hangmen, and no limit to the number of hangings one executioner may perform before he is given a break.

Not all hangmen have that reaction and one the chief executioners in England, John Ellis, committed suicide because of the stress created by his job, and of one execution in particular. A reporter for The Rochdale Observer interviewed Ellis's wife shortly after his funeral and she mentioned the hanging of Edith Thompson, carried out by her husband on 9th January 1923 [4]. The execution, and its preliminaries, are described in the book Criminal Justice by René Weis [5] and the distinguished Shakespearean scholar describes the events leading up to Edith Thompson's conviction for the murder of her husband. It is a harrowing, and tragic, story and I found some sections of the book distressing to read. Despite the verdict of the court that she was guilty of murder, Weis shows us that this was a miscarriage of justice. 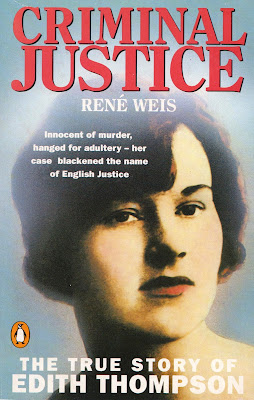 Edith had brief, passionate encounters with Freddy Bywaters, a young merchant seaman, during his short return visits to England between voyages to Australia and the Far East, but it was Bywaters alone who killed her husband, Percy. In the photograph below, posed deliberately by Edith's brother, Edith is flanked by Percy on the right and by Freddy on the left - eighteen months after the photograph was taken all three would be dead. There is no dispute that Freddy killed Percy, although there has been discussion of the circumstances that led up to the assault and, to the end, Freddy maintained that Edith was innocent and had nothing to do with the final act. 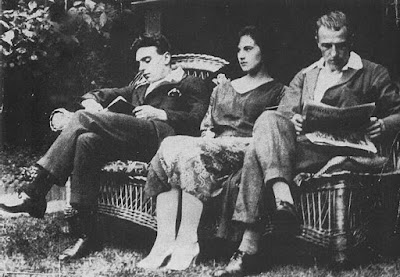 Especially harrowing in Criminal Justice are the descriptions of the extreme anguish that Ethel suffered while on remand and when awaiting execution. In the weeks leading up to 9th January 1923 she was so distressed that frequent doses of strong sedative had to be administered and she was near unconscious when warders effectively carried her to the scaffold after Ellis had entered her cell to prepare her for the execution (was this his first contact with Edith after being summoned from Rochdale?). When the act took place, there were dreadful consequences, as the drop caused severe haemorrhaging and there was a lot of cleaning up to do. Ellis and the prison staff were obviously very upset by this and they may also have suspected that she was innocent of a capital offence. Several journalists took up both Edith's and Freddy's cases and argued against the verdict of the court and there was wide coverage of the case [5] and of subsequent events.
I won't dwell more on that story, but it is relevant to discussions on the use of the death penalty as a means of state punishment. If the cold-blooded nature of the act wasn't bad enough, the mental anguish of waiting for "justice", the agony of visits from family and friends as the day draws nearer, and the effect on all the staff are quite enough to convince me that capital punishment cannot be justified, even for the most heinous crimes. 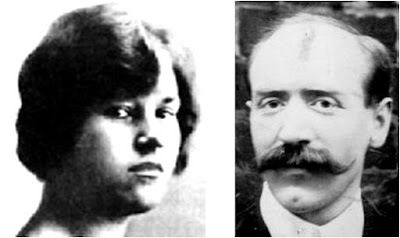