Ken Follett’s fascination with cathedrals led to his book The Pillars of the Earth. This is what he wrote on his website:

When I started writing, back in the early Seventies, I found I had no vocabulary for describing buildings. I read a couple of books on architecture and developed an interest in cathedrals. I became a bit of a 'train spotter' on the subject. I would go to a town, like Lincoln or Winchester, check into a hotel and spend a couple of days looking around the cathedral and learning about it. 1

I was brought up in Paignton, Devon, so our local cathedral was at Exeter and I remember it as being an imposing sight on the hill to the right, viewed from trains approaching Exeter St David’s railway station from the south. I also remember being struck by the interior during occasional visits, as it was so much larger, and contained so much more imagery, than the small and plain Baptist chapel our family attended. However, my interest as a child was more on real train spotting than in looking at cathedrals in the way that Ken Follett describes.

Durham Cathedral looks even more impressive than Exeter Cathedral when viewed from the railway line. I first visited Durham when I went to the University to be interviewed for a PhD studentship. Much as I was interested in the research programme, it was Durham itself that made the stronger impression on me and I’d never seen anything quite as dramatic as the cathedral and its setting. This is what Bill Bryson wrote about Durham in Notes From A Small Island: 2

I was heading for Newcastle, by way of York, when I did another impetuous thing. I got off at Durham, intending to poke around the cathedral for an hour or so and fell in love with it instantly in a serious way. Why, it’s wonderful - a perfect little city - and I kept thinking: ‘Why did no-one tell me about this?’ I knew, of course that it had a fine Norman cathedral but I had no idea that is was so splendid.. 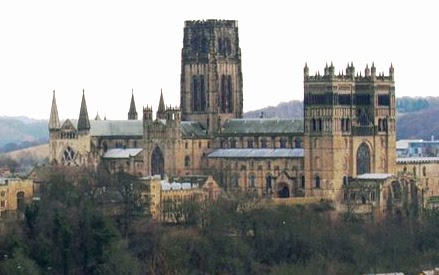 He goes on to write this about Durham Cathedral - “Everything about it was perfect” - and that describes well my first encounter and I still feel that way over forty years later - a very short time compared to the nearly 1000 years since the majority of the cathedral was built.

Fortunately, I was awarded the research studentship, so had three years to get to know the cathedral (it turned into six years, as I followed up with an Academic appointment at the University of Newcastle-upon-Tyne, just a few miles up the road). It is a magnificent building that dominates the small city and I enjoyed walking past it on my way to the Science Laboratories, sometimes popping in to experience the tranquillity that the huge interior provided. I also attended music concerts held there, and listened to the organ being played, and the sound of powerful music in this setting brought other emotions. To those who are religious, it must bring a sense of the majesty of God and the scale of His Creation and that was the intention of its builders - that and to convey the power that the Church held. Imagine how people felt when they saw the cathedral from miles around and walked to it (it is a place of pilgrimage, as the bones of St Cuthbert are buried there) and then became awed by the magnificence of the building? We are now familiar with many large and tall buildings, but Durham Cathedral remains awesome. Like Ken Follett, I’ll continue to be fascinated by cathedrals and always love visiting them. Yet, even though they provide religious experiences for many, I don’t feel tempted to believe in the supernatural as a result. I’m happy to see cathedrals as magnificent, enduring monuments to human achievement.