Elders and brambles: foods and mythologies

It is early summer in Great Britain and many hedgerows are dominated by the creamy blossoms of the elder. Last week, I picked some, cut the flowers from the stems and steeped them, together with slices of lemon, in sugar solution to make elderflower cordial. 1 It is such a simple thing to do, but the end product is delicious, whether taken diluted with water, or with some fizzy wine. Some would argue that it is much easier to buy a bottle in a store, as elderflower cordial is now available so readily, but there is something satisfying about producing one’s own and, like all those who do, I think my cordial tastes better than commercial brands.

I’ve always liked collecting food from the countryside and there are many opportunities, especially in late summer and autumn. Elderberries then ripen and can be collected to make jellies 2 (do try it, if you’ve not already done so) and there is an abundant supply of blackberries. Indeed, it puzzles me that there are punnets of blackberries on sale in supermarkets at the time there are masses of the same fruit in hedgerows, although I admit there is a price in their collection, as one rarely escapes without a few scratches from thorns while gathering berries. 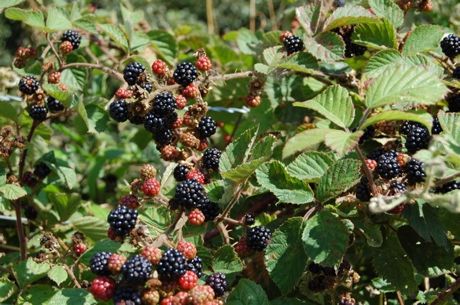 One of the reasons that few of us pick berries is that we are very far from our hunter-gatherer roots and have little knowledge of which wild foods are edible and which are not. Our ancestors, who had received this information from older people around them, collected wild fruits much more readily and they were also aware of mythologies that surround the plants on which they grow. In Great Britain, brambles and elders are both associated with superstitions and it must be borne in mind that both stain red, an association with the colour of blood. Anyone passing through a bramble arch (formed where a branch has grown out and rooted on touching the ground) was thought likely to be cured of a number of medical complaints, amongst which was whooping cough. 3 Children unfortunate enough to be infected with Bordetella pertussis (the bacterium which causes whooping cough) therefore felt miserable from all the coughing and also sore from scratches provided by the bramble. Perhaps it formed a distraction? Scratches from the arch are likely to be beneficial in the cure of other illnesses and drawing of blood has been regarded as an excellent way of treating infections in the recent past (see any description of the use of lancets, or leeches).

Elder has a much more complex role in superstition and mythology. As Steve Roud explains: 3

“Elders were everywhere connected with fairies and witches, although it was not always clear in what way. It was also reputed to be the tree on which Judas Iscariot hanged himself, and it was believed to have provided the wood for the Crucifixion. Furthermore, it must never be cut down, or the wood burned; it must never be used to make cradles; a wound inflicted with an elder spike was bound to prove fatal; and the tree would ‘bleed’ if cut.

It has proved impossible to reach an adequate synthesis of elder beliefs, because the evidence is patchy and contradictory, and all that can be said is that elder was generally agreed to be ‘uncanny’. There is a curious sense that the negative and positive feelings stemmed from the same basic notions and may have depended largely on the general disposition of the informant.”

We know that humans are imaginative in providing explanations and this shows well when we consider old superstitions. The power of our imagination is also important in affording religious explanations. For example, the abundance of berries is late summer and autumn is understood by some Creationists as being a gift from God, being a loose interpretation from the text in Genesis in The Holy Bible: 4

The implication here is that God created fruit trees and that they were “good”, meaning that fruit had been supplied for human consumption.

However, the production of fruits has been a feature of the biology of these plants long before humans appeared. Blackberries and elderberries contain the seeds that germinate to give the next generation of plants and these seeds must be dispersed. Some fruits will fall near the parent plant and be in competition with it, but others will be eaten by birds and other animals, attracted by their colour and succulence. Seeds pass through the gut of these grazers and are deposited in faecal matter, usually at some distance from the parent plant. The seeds are thus dispersed and also start to grow in a little patch of concentrated nutrients. The cost to the parent plant is the production of an excess of fruits to ensure that the process of dispersal is optimal and this strategy has developed through evolution. My picking of berries, or flower heads, is taking advantage of this natural trend. Of course, some would argue that this was all part of the Creation........

3 Steve Roud (2003) The Penguin Guide to the Superstitions of Britain and Ireland. London, Penguin Books.