Gosse, Elgar and the wonders of microscopy

Philip Henry Gosse was at the forefront of popularising the use of microscopes and in his book Evenings at the microscope; or researches among the minuter forms of animal life,1 he writes: “Great and gorgeous as is the display of Divine power and wisdom in the things that are seen of all, it may safely be affirmed that a far more extensive prospect of these glories lay unheeded and unknown, till the optician’s art revealed it. Like the work of some mighty genie of Oriental fable, the brazen tube is the key which unlocks a world of wonder and beauty before invisible, which one who has once gazed upon it can never forget, and never cease to admire.” Even through this expression of the religious ardour that dominated Henry Gosse’s life, it is easy to feel his amazement at what he saw and he conveyed this both to his friends and, through the book, to a wider public.

Microscopy became a popular pastime of the Victorian middle classes, once quality microscopes became less expensive, and an industry then developed in supplying slides of mounted specimens, often having elaborate paper labels or covers.2 While Henry Gosse, as a zoologist of note, described animals and parts of animals through 21 chapters of vivid description and with 113 of his own illustrations in Evenings at the microscope, algae were also a major fascination for Victorian microscopists, and the most important of these algae were the diatoms. These single cells (which may also form colonies or filaments) live within a coat of silicates termed a frustule, having two opposed valves that are secreted by the alga. The coats have characteristics unique to each species and provide the diagnostic features used in their classification. Victorian slides of mounted diatoms show not only an interest in individual algae, but also in the arrangement of frustules into “artistic” patterns.3 This tradition continues today in the work of the brilliant Klaus Kemp.4

Looking at diatoms provided inspiration in some unusual quarters. In his article in Gramophone of June 1957, published to mark the centenary of Edward Elgar’s birth, the author and raconteur Compton Mackenzie quotes this exchange with Elgar: “'Not that I care,' he growled quickly. 'I take no more interest in music. You'll find as you grow older that you'll take no more interest in literature. The secret of happiness for an artist when he grows old is to have a passion that can take the place of his art. I have discovered the joy that diatoms [my emphasis] can give me. This miraculous world of beauty under the ocean revealed by the microscope is beyond music,' and he went on to expatiate on the exquisite patterns formed by these fossilised algae and the spiritual comfort that observation of them brought to his mind.”5 The conversation from which the quote is taken took place in 1923, when Elgar was 66 years old. Although a famous and great composer, Elgar was prone to bouts of self pity and the quote is a reflection of one of those moods, but no-one can doubt his fascination for microscopy, the same fascination that Henry Gosse had done much to popularise over sixty year earlier. (By the way, for those of you who enjoy coincidences, Elgar was brought up in High Street, Worcester, the same street in which Henry Gosse was born many years before).

In the Natural World, diatom frustules are found extensively in the sediments of water bodies, from ponds to oceans. It may be thought that the coats developed to deter predators, and some of the more spiky types may do so, yet diatoms are fed upon by zooplankton and other animals, just as are algal cells without that protection. The result is not only the sedimentation of the frustules of dead algal cells but also of the frustule-loaded faecal pellets of animals which have eaten the algae. All fall through the water and accumulate over the bed. By taking cores, we can therefore know which species have been present in the surface waters through time, just as we can record the presence of plants by the types of pollen we see in cores taken from soil profiles. The deposits of diatom frustules can be so packed that they result in “diatomaceous earth” or diatomite, familiar for its many applications in industry after it is extracted by mining, or the use of quarrying techniques. These, of course, are ancient deposits and will have lost the clear stratification which occurs over short time periods of hundreds of years and where the contents of the annual layers of sediment can be recorded. We use information from these strata to date accurately the appearance of various species of diatom that we know are indicators of certain chemical conditions, or temperature regimes. In this way, diatoms give us a means of recording changes over centuries and much research has focussed on this use frustules. For example, changes in the diatom flora occurred after the Industrial revolution in Europe, when acid precipitation became a major feature and lakes changed in water quality. They are also used to show changes which have resulted from global warming.

Such practical applications do not detract from the beauty of diatom frustules, so stunning when observed under the microscope, especially under special lighting. It is easy to comprehend Gosse’s conclusion that we are witnessing “the display of Divine power and wisdom” but, for those that do not believe in the chronology of events described in the book of Genesis, there is an equal, or perhaps greater, sense of awe. One is left with the question: How and why did diatoms evolve their many varieties? The fossil record shows that they have existed for tens of millions of years in forms that are recognisable today6 and we can only speculate on the steps that occurred in the evolution of the siliceous frustule before that. It’s the frustule that makes diatoms so popular and useful but that is only the covering of the living algae, which are so important in trapping carbon dioxide through photosynthesis and thus playing a major role in the metabolism of energy in fresh waters, marine coasts and the oceans. 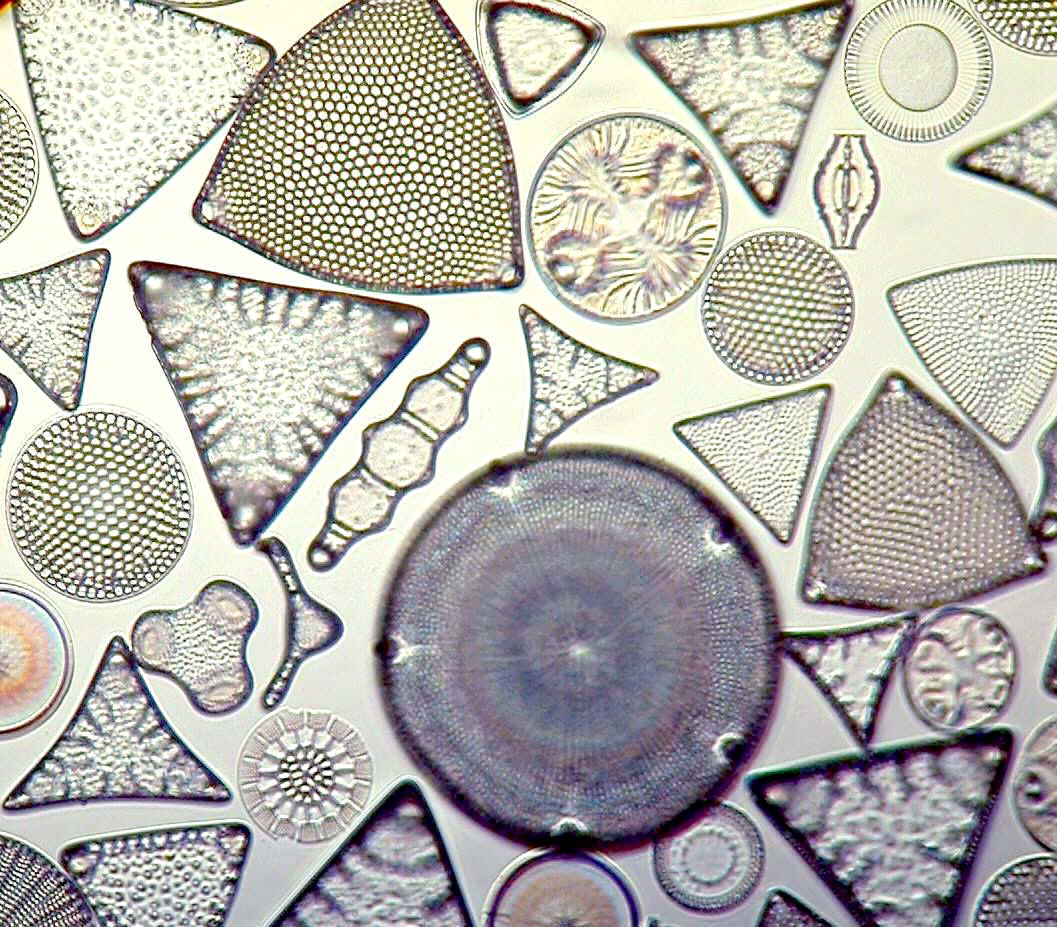 1 Philip Henry Gosse (1859) Evenings at the microscope; or researches among the minuter forms of animal life. London, Society for Promoting Christian Knowledge.