Monarchs and milkweeds - wonders of Nature


Like many gardeners, I love scented plants and it is easy to think that the beautiful fragrance of some flowers came about for our benefit. In a way it has, as we bred garden plants from wild stocks and enhanced the nature of their scent as part of that process. 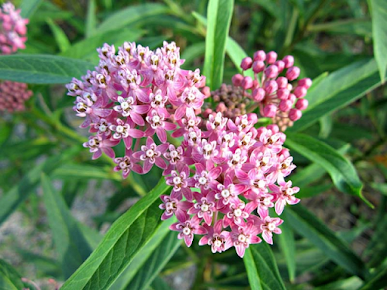 I have just bought some Asclepias seeds and these will be planted to give masses of vanilla-smelling flowers throughout the summer. It isn’t just me that finds them attractive, as many insects, including butterflies, home in on them and collect the abundant nectar produced by the flowers. In moving from flower to flower and plant to plant, the insects ensure that pollination takes place, so the plants have a lot to gain from the relationship. It’s a wonderful association that has evolved through a number of steps since plants were able to generate, and transport, sugars produced by photosynthesis.

The seeds to be planted in my garden originate from wild Asclepias that grow in North America and their common name is milkweeds. Wild milkweeds are fed upon by the larvae (caterpillars) of Monarch butterflies (Danaus plexippus) and, indeed, their larvae are largely confined to these plants. As a defence against attack, milkweed leaves contain deterrent chemicals, including cardiac glycosides which cause powerful effects on the heart muscle of vertebrates. The larvae of Monarch butterflies are not affected, but they sequester the toxin in their bodies and this is retained when the larvae pupate and then produce adult butterflies. The adults are strongly coloured (aposematic coloration) and this is likely to act as a warning to any animal which attempts to eat them, as the effects of the cardiac glycoside should act as a deterrent against future predation. 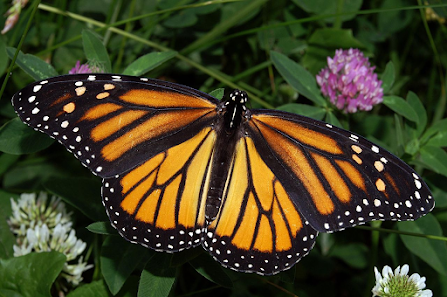 Monarch butterflies make long migrations. During winter, they have reduced metabolism (a diapause) and remain semi-dormant in aggregations almost covering some trees in Mexico. As Spring progresses, they waken and begin to fly north, feeding as they go to fuel the flight. They then breed, before a new generation of adults continues the migration, with two further generations being produced before the migration is complete. It is adults from the fourth generation that fly all the way back to the Mexican overwintering grounds and they go into diapause upon arrival.

Just think of the evolutionary steps needed to achieve the biology of the Monarch butterfly, all becoming encoded within their genetic make-up:

Rupert Cornwell wrote an article in The Independent on Sunday on 17th March 2013 where he stated [with my paraphrasing]:

"Forget the politicians and the rest of the human activity that makes Washington tick. The real wonders of this place, I have come to realise, are natural... ...the glorious visitation of the monarchs takes place every year. Here in DC, we're on the edge of the migration, but in May a few northbound ones, instanttly recognisable through their gaudy gold and black colouring, usually drop into the garden to refuel. More may be seen in late September or October on their way back to Mexcio, still a month or two's travel away."

It reminds us of the inspiration that Nature brings and how recent is the appearance of humans in evolutionary time. Yet, as Rupert Cornwell reminds us, we humans are having major effects on the chances of survival of Monarch butterflies and their loss can only result in our impoverishment. How appropraite that his article was written from the city holding the centre of power in the World's most powerful nation. How sad that we all allow short-term, superficial interests to override something which is much more valuable and important.