In praise of Leslie Jackman 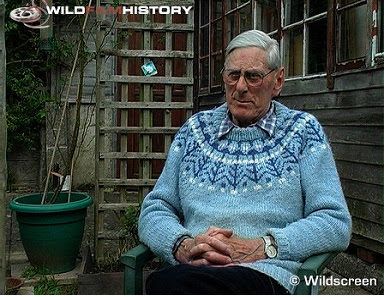 Philip Henry Gosse was not the only nationally famous Natural Historian to spend much of his life in Torbay. In recent times, this accolade must also be given to Leslie Jackman, who died in December 2011 aged 91. He had much in common with Henry Gosse and Mr Jackman was a hero of mine when I was growing up, as he not only ran the Paignton Aquarium but was also a pioneer of Natural History broadcasting and filming. We are fortunate in having a record of some of his achievements in a video interview recorded in 2006:

Originally a teacher, Mr Jackman (I will always use that form of address, as I was at school with his daughter Diane) had an enthusiasm for looking at living things and wanted to tell others about what he saw. Film and television became excellent media for doing this and he presented a Club Room section of the BBC TV programme “Out of Doors”. Here, Mr Jackman would show different kinds of fungi, snakes, or other interesting wildlife and there were always children present as an audience, so his teaching skills came to the fore. The Club Room was an extension of the Nature Table we had in schools at the time, but none of our teachers, however good they were, could be as expert or as engaging. I watched the programme avidly on our single-channel TV and was also given the accompanying “Out of Doors” book as a present, in which Mr Jackman described, among other things, how to make bark rubbings or casts of wild animal footprints.

It was probably as a cameraman that Mr Jackman made his greatest contributions. Filming covered a wide range of topics but he always had a fondness for the sea shore, just like Henry Gosse. Whereas Henry had the ability of an artist to convey impressions of what he saw, Mr Jackman used film, all shot using what would now be regarded as a primitive camera, as there was no playback and one could only see the results when film came back from the processing laboratories. There were shots in the field and also many sequences filmed in a shed at the bottom of his garden in Paignton and I was fortunate to help with one of them. It must have taken many, many hours to complete filming for a complete programme and it could only be done by someone with a passion for the subject.

There were also books, and a quick search on Amazon shows just how many there were – mostly aimed at the young and at amateurs, both of which formed Mr Jackman’s key audience. Many that read the books and saw his work on “Out of Doors”, films for the BBC “Look” series and other Nature documentaries were influenced by him in developing a fascination for the natural world. As he says in the interview, it was his wish to get people to appreciate what was all around them. He was such a nice man and not one for the cult of celebrity that seems to infect the media today. That provides another parallel to Henry Gosse, and I think it is fitting to celebrate both men’s careers and achievements side by side.

In the video interview, Mr Jackman describes how his break into filming and broadcasting came with a mention of cuttlefish feeding, which he had seen in his large aquarium tank in Paignton. How ironic that the last practical class that I taught at UCL was a dissection of the cuttlefish, complete with a description of the feeding mechanism and the use of the tentacles. That somehow seems fitting to me.
Posted by Roger at 03:45