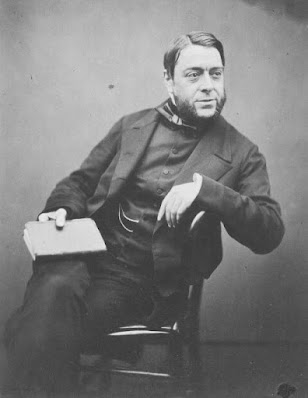 
Henry Gosse was a great Natural Historian and communicator who believed that making observations of organisms and the environment in which they live has a powerful, positive effect on our emotions. For Henry, it was a confirmation of the magnificence of his God, for he was a devout Christian and believed completely in the Biblical account of Creation. This is what he wrote in the Preface of "A Naturalist's Rambles on the Devonshire Coast":

The following pages I have endeavoured, as far as possible, to make a mirror of the thoughts and feelings that have occupied my own mind during a nine months' residence on the charming shores of North and South Devon. There I have been pursuing an occupation which always possesses for me new delight,- the study of the curious forms, and still more curious instincts, of animated beings. So interesting, so attractive has the pursuit been, so unexpected in many instances the facts revealed by the research, that I have thought the attempt to convey, with pen and pencil, to others the impressions vividly receibed by myself might be a welcome service....

.... I have not made a book of systematic zoology; nor a book of mere zoology of any sort. I venture to ask your companionship, courteous Reader, in my Rambles over field and down in the fresh dewy morning; I ask you to listen with me the carol of the lark, and the hum of the wild bee; I ask you to stand with me at the edge of the precipice and mark the glories of the setting sun; to watch with me the mantling tide as it rolls inward, and roars among the hollow caves; I ask you to share with me the delightful emotions which the contemplation of unbounded beauty and beneficence ever calls up in the cultivated mind.

Hence I have not scrupled to sketch pen-pictures of the lovely and romantic scenery with which both coasts of Devon abound; and to press into my service personal narrative, local anecdote, and traditionary legend; and, in short, any and every thing, that, having conveyed pleasure and interest to myself, I thought might entertain and please my reader. It is not the least of the advantages of the study of natural history, that it strengthens in us "the habit of wishing to discover the good and the beautiful in all that meet and surround us."

If it should be objected that - to treat of the facts which science reveals to us, in any other manner than that technical measured style, which aims not at conveying any pleasurable emotions beyond the mere acquisition of knowledge, and is therefore satisfied with being coldly correct,- is to degrade science below its proper dignity, I would modestly reply that I think otherwise. That the increase of knowledge is in itself a pleasure to a healthy mind is surely true; but is there not in our hearts a chord that thrills in response to the beautiful, the joyous, the perfect in Nature? I aim to convey to my reader, to reflect, as it were, the complacency which is produced in my own mind by the contemplation of the excellence impressed on everything which God has created.

Just to emphasise the importance of accuracy in scientific investigation, Henry goes on to state:

....I would not have it supposed that I have ever stated the facts of Natural History in a loose, vague, imaginative way. Precision is the very soul of science,- precision in observation, truthfulness in record: and I should deem myself unworthy of a place among naturalists, if I were not studious to exhibit the phenomena of Nature with the most scrupulous care and fidelity. Humanum est errare: I dare not suppose I have escaped error; but I am sure it is not the result of wilfulness, I trust it is not of carelessness.

There is no doubting Henry's honesty in all that he did and this certainly applied to his scientific work, which led to him being elected a Fellow of the Royal Society. However, his science had the wider setting that provided a more fulfilling view of Natural History. It is a highly Romantic approach, of course, but that is no bad thing. It is an approach which enhances our appreciation of the World and helps us to recognise our responsibilities in minimising the destruction of Nature.

Although Henry Gosse and I would disagree on many things related to religious belief, I find him to be an inspiration and agree strongly with the sentiments in the Preface. I am not ashamed to call myself a Romantic.