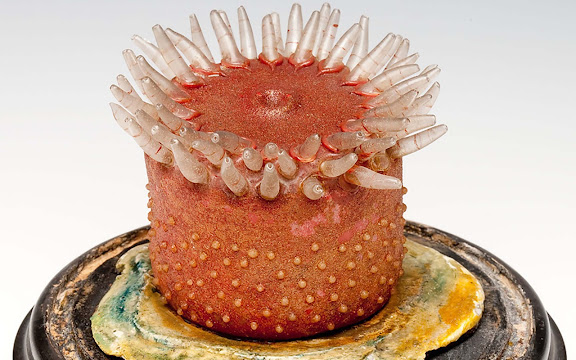 Leopold Blaschka was an expert craftsman in glass, coming from a family who worked in Bohemia and also, many years before, in Venice. His technique used lampworking, where glass is kept pliable by means of a bellows-driven torch and then moulded using tools. He was also able to incorporate textures and colour by adding different materials and he produced mainly jewellery at the start of his career.
Personal tragedy overtook Leopold in 1850 when his wife died of cholera after just four years of marriage, his father dying just two years later. These were heavy blows and Leopold gained some solace from studying Natural History, extending this to making detailed drawings of plants. It wasn’t until a journey to America to arrange contracts for the sale of jewellery that Leopold began to recover and see the potential for making plant and animal models in glass. On return to Germany, he re-married, was set up as the master of his father-in-law’s glass workshop and, as a small number of workmen were also employed, Leopold had the time to develop his models of plants. A son, Rudolf, was born in 1857 and he was eventually to join his father’s workshop and the two then began to make models of animals, especially marine invertebrates.

As readers of “Walking with Gosse” will know, the finest illustrations of these marine creatures available were in the works of Philip Henry Gosse, who was not only a talented artist and scientist but also the author of a book on aquaria. Henry gave details on how to maintain a sea-water aquarium so that many living animals could be observed under water; a source of fascination for those who had never seen such things. Earlier, it was possible to see specimens in museums but these were preserved in spirit which caused them to lose colour and shape as there was little to support their bodies and they were often slumped in the bottom of display bottles.

Now, Leopold and Rudolf Blaschka were able to create glass models, complete with natural colours and extended as in life. They used their own illustrations, based on those of Gosse and observations from their own aquarium of specimens which had been shipped in. They also used the illustrations by Ernst Haeckel of minute animals which could only be seen using a microscope, a piece of equipment again popularised in a book by Henry Gosse. Blaschka invertebrate models became well known and orders came in from a number of museums. Among others, the British Museum ordered 182, The National Museum of Ireland 530, and the Museum of Comparative Zoology at Harvard 350. There were hundreds more and then thousands of glass models of flowers and plants. I don’t know how long each piece took to make but, the total time from research to final product must have been days, so their industry and attention to detail can be imagined. It wasn’t just lampworking and glass blowing either, for pieces of wire were also involved, as were resins, and each technique required dexterity and patience.

I’ve seen some Blaschka marine invertebrate models in the Grant Museum of Zoology at UCL and they are exquisite; very much at the crossover between science and art. If you can’t see the models in museums, just take a look at illustrations on the www [for example, at http://blaschkaphotos.mannlib.cornell.edu/main.php]. Wonderful, aren’t they? The real things are even better “up close”.

To find out more about the Blaschkas, see the web links below. These articles form the basis of my blog post and I am grateful to the authors for their inspiration. Special thanks go to Miranda Lowe of the Natural History Museum in London for providing references and also for a most interesting conversation about the work of Leopold (1822-1895) and Rudolf (1857-1939).