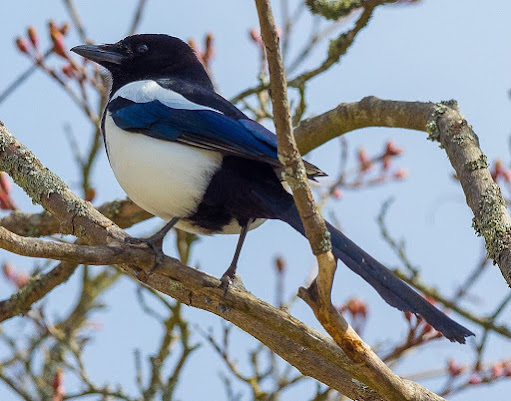 Last summer, I was looking out through the kitchen window into the back garden. There were several birds flying around, or running and walking on the lawn, and I noticed one fledgling blackbird. It was able to fly, but was not a confident flyer, and other blackbirds were in close proximity.

Suddenly, five magpies swooped down and started to attack the fledgling blackbird, taking turns to stand on it and peck at its head. I had to make a decision on what to do; should I rush out and scare the magpies away, or “let Nature take its course”. I didn’t have long to make the decision, but opted for the latter, as the fledgling would have been damaged by the attack and probably traumatised. Both would have decreased its chances of survival.

While the attacks continued, adult blackbirds did what they could to distract the magpies by diving at them and calling noisily, but still the pecking continued. In the end, the magpies appeared to lose interest and flew off, leaving the body of the fledgling behind; the adult blackbirds then dispersed and thereafter showed no interest in the corpse. I went out into the garden and retrieved the body which showed heavy damage on the head but little else in the way of external marks.

Since that day, I have wondered whether I could have saved the fledgling and, importantly, whether I should have done. I have also puzzled as to why the magpies should indulge in this killing without having any interest in consuming their prey, especially as it has been claimed that they “grieve” for the loss of one of their own (see the link below). It was just one incident in a back garden, but one which left a lasting impression. Not all Nature is harmonious and beautiful.