Women on the shore


The growing appeal of marine Natural History in the Nineteenth Century was shared by both men and women, sometimes jointly and sometimes in groups of one sex. 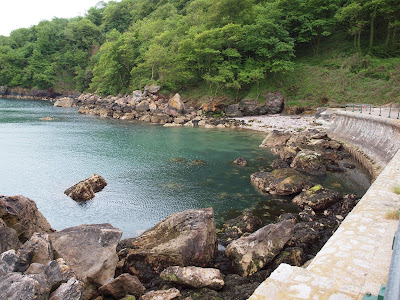 Philip Henry Gosse gives an account of an excursion by small boat:

Let us then scramble down to the beautiful Anstey’s Cove [above].. ..Yonder on the shingle lies a boat, newly painted in white and green, for the attraction of young ladies of maritime aspirations.. ..”Jump aboard , please, Sir [P.H.Gosse]! Jump in, ladies! jump in, little master [Edmund Gosse]!” And now, as we take our seats on the clean canvas cushions astern, the boat’s bottom scrapes along with a harsh grating noise over the white shingle-pebbles, and we are afloat.. 1

There follows a description of all the seaweeds and animals visible from the boat as it moves around the coast and also visits islands close by. I’m sure that the women enjoyed the expertise of such a knowledgeable enthusiast as Henry Gosse, just as other women had done on an amusing occasion on the shore in Torbay, described by Henry Gosse’s son Edmund:

..we came across a party of ladies, who were cackling so joyously over a rarity they had secured that our curiosity overcame our shyness, and we asked them what they had found. They named a very scarce species, and held it up to us to examine. My father, at once, civilly set them right; it was so-and-so, something much more commonplace. The ladies drew themselves up with dignity, and sarcastically remarked that they could only repeat that it was the rarity, and that “Gosse is our authority”.  2

In addition to observing, and identifying, living algae and animals, women also made collections for their “cabinets of curiosity”. Fossilised specimens were common in these cabinets and Gosse describes one site in South Devon, well-known to collectors:

The beach of white shingle at Oddicombe, whither ladies so often repair to search for pebbles containing fossil madrepores, washed up by the tide... 3

Henry Gosse was at the forefront of the Victorian interest in marine biology and in the development of aquaria. His first wife, Emily, accompanied him on some collecting trips and also on the field courses that he led in Devonshire and South Wales. Tragically, Emily died, and her support in the typical female role of the day - silent companionship while Henry worked, and help with translation from other languages - was lost. Henry re-married after meeting Eliza through a shared enthusiasm for both Natural History and Christian views that centred on belief in the literal truth of The Bible. 4

In the chapter on “The Naturalist of the Boudoir” in her book The Heyday of Natural History 1820-1870, 5 Lynn Barber makes interesting observations on the ways women took part in the great enthusiasm for the natural world that developed during the Nineteenth Century:

Women read about natural history, wrote about it, drew it, collected it, and generally enthused about it as much as men did..

Victorian women rarely translated their genuine enthusiasm for natural history into any purposeful form of research.. ..Illustration was the only form of natural history in which women really excelled.. .. Women were trained to draw well: it was one of the few things they practised and studied consistently from infancy through to adulthood.. ..Women also tended to make punctilious collectors.

The most scientific woman collector of the age was not a fossilist but an algologist, Mrs A.W.Griffiths of Torquay.. .. One genus and several species of seaweed were named after her, and she is mentioned with respect - almost with awe - by every Victorian writer on seaweeds, but she published nothing in her own name, and now survives only as an acknowledgement in other people’s prefaces.

Amelia Griffiths (1768-1858) was one of several well-known seaweed collectors and experts and it is surprising that she is barely mentioned by Henry Gosse, especially as both lived for much of their lives in the same town, although Henry only became a permanent resident in 1857, one year before Amelia died at the grand age of 90. He must also have known of Mary Wyatt (1789-1871), who was also a collector and who kept a shop in Torquay that dealt in pressed plants and sea shells. Mary became Amelia’s servant and, although illiterate, 6 she joined Amelia in jointly publishing Algae Danmonienses, consisting of four volumes of dried seaweeds collected largely from Torbay. In contrast to Henry Gosse, William Pengelly FRS, the distinguished explorer of cave faunas, and another Torquay resident, does refer to Amelia, as he was responsible for making arrangements in 1862 that her “beautiful and valuable collection of sea-weeds” 7 was transferred to Kew and her collection of shells to the Natural History section of the British Museum. That the collections went to such internationally recognised centres is testament to their significance.

Although the contributions of Amelia Griffiths and Mary Wyatt were recognised widely, the doyenne of 19th century women algologists was Margaret Gatty (1809-1873 - see below). She was the daughter of a clergyman (Dr Alexander John Scott, famous for being the chaplain who cradled the dying Nelson in his arms at the Battle of Trafalgar) and her uncle held the living in Ecclesfield, near Sheffield  in Yorkshire. 8 Mrs Scott died when Margaret and her elder sister, Horatia, were small, with Margaret being the dominant of the pair, having a strong drive to advance herself. Unlike Amelia Griffiths, she always had a passion for writing and took it seriously, showing her poems to family friends connected to the world of literature. 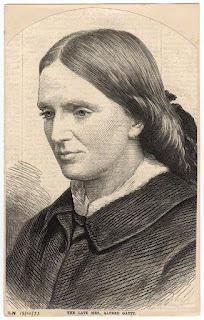 In 1839, Margaret married the Reverend Alfred Gatty and, as fortune would have it, the living at Ecclesfield became vacant after the death of Margaret’s uncle, so Rev. Gatty was able to replace him in the post. Margaret thus settled to the life of a cleric’s wife, working in the parish and also being a dutiful companion and, of course, mother to numerous children. In 1848, the burdens of the parish, child rearing and pregnancies became too great even for her energy and drive and she left the family for a break in Hastings to convalesce and regain her strength. By chance, a doctor whom she was consulting, gave her a copy of Harvey’s Phycologica Britannica (a standard work on seaweeds and zoophytes - “plant-like animals”) and Sheffield writes: 8
Why should this catalogue of plants and life-forms suddenly have captured her interest and imagination? Perhaps it was a buoy in a sea of endless empty days and perhaps Gatty, exiled at the sea-side, became infected by the mid-century ‘craze’ for natural history, for gathering, collecting, naming and labelling specimens that many men, women and children of all social classes were taking up. Marine botany was no exception as the rise of interest in seaside recreation included the scouring of beaches and tide-pools and the dredging of the sea itself for the ultimate specimen. At this time Phillip [sic] Henry Gosse (1810-1888) had already published The Ocean (1845), and would go on to publish other popular scientific works in quick succession..

Interestingly, Margaret made little reference to seaweeds in her diary entries while she was in Hastings, but she now set out on serious study and her home in Yorkshire “became her laboratory.. ..[and] her family found themselves knee-deep in seaweeds, seaweed books and seaweed correspondence.” 8 She had always loved the sea and now had an added reason to make visits to the shore. Her work culminated in the publication in 1863 (as Mrs Alfred Gatty) of British Seaweeds, drawn from Professor Harvey’s “Phycologica Britannica”. These volumes (available today as free Google e-books) served to simplify the scientific descriptions used by Harvey and thus make his work more accessible to a general audience, Margaret being in communication with Harvey throughout the production of the book. It wasn’t her only publication, as she wrote many other popular books linking Natural History and religious themes. Probably the best known are her five volumes of Parables from Nature published from 1855-1871 and her writing was popular and profitable. 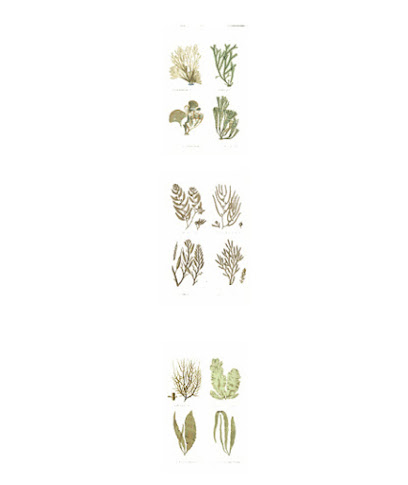 Margaret Gatty’s algal herbarium, with seaweeds prepared using the techniques of Miss Cutler of Sidmouth, another renowned woman algologist of the times, was donated to the University of St Andrews by her daughter Horatia. It is pleasing to know that it is still used in research, 9 just as Amelia Griffiths’ herbarium is likely to be at Kew. Their work made important contributions to science and demonstrates that women Natural Historians in the Nineteenth Century were not just collectors (although that was certainly the majority case), but much respected by the male-dominated scientific Establishment.

2 Edmund Gosse (1890) The Naturalist of the Sea-Shore: The Life of Philip Henry Gosse. London, William Heinemann.

7 Hester Pengelly (ed.) (1897) A Memoir of William Pengelly, of Torquay, F.R.S., Geologist, with a selection from his correspondence. London, John Murray.