Charles Waterton, taxidermy and the “Nondescript”

Charles Waterton cared passionately for wildlife but he also killed animals for display in his collection. Each was prepared using his own method, an approach that earned him the title of the “Father of Modern Scientific and Artistic Taxidermy”. 1 The animals from his Wanderings in South America took a special place in the collection at his home, Walton Hall in Yorkshire, and each was prepared after highly skilful dissection. His method is described in a chapter entitled “On Preserving Birds for Cabinets of Natural History”. 2

We know that Charles was sometimes blunt and he begins by saying:

Were you to pay as much attention to birds, as the sculptor does to the human frame, you would immediately see, on entering a museum, that the specimens are not well done.

This remark will not be thought severe, when you reflect that,- that which once was a bird, has probably been stretched, stuffed, stiffened, and wired by the hand of a common clown. Consider, likewise, how the plumage must have been disordered, by too much stretching or drying, and perhaps sullied, or at least deranged, by the pressure of a coarse and heavy hand,- plumage which, ere life had fled from within it, was accustomed to be touched by nothing rougher than the dew of heaven, and the pure and gentle breath of air.

This is what Waterton said about beginning work on birds:

As you can seldom get a bird without shooting it, a line or two on this head will be necessary. If the bird be still alive, press it hard with your finger and thumb just behind the wings, and it will soon expire. Carry it by the legs, and then the body being reversed the blood cannot escape down the plumage through the shot holes. As blood will often have issued out before you have laid hold of the bird, find out the shot holes, by dividing the feathers with your fingers, and blowing on them, and then with your penknife, or the leaf of a tree, carefully remove the clotted blood, and put a little cotton on the hole. If, after all, the plumage has not escaped the marks of blood; or if it has imbibed slime from the ground, wash the part in water, without soap, and keep gently agitating the feathers, with your fingers, till they are quite dry. Were you to wash them and leave them to dry by themselves, they would have a very mean and shrivelled appearance.

In the act of skinning a bird you must either have it upon a table or upon your knee. Probably, you will prefer your knee; because, when you cross one knee over the other, and have the bird upon the uppermost, you can raise it to your eye, or lower it at pleasure, by means of the foot on the ground, and then your knee will always move in unison with your body, by which much stooping will be avoided and lassitude prevented. 2

After taking great care with any delicate, un-feathered parts, the skin is then treated with a solution of corrosive sublimate in alcohol. Corrosive sublimate is mercuric chloride (HgCl2) and the alcohol allows penetration of the mercury salt to all parts and thus ensures their preservation.

The next step in the preparation of a specimen is to carefully fill the body cavity and other parts with cotton and to stitch the body back to its natural form. As the legs will tend to dangle after the supporting skeleton has been removed, Waterton proposes a series of stitches which allow them to be in a natural position and that allow some flexibility in the finished preparation. Bees wax can be used to make sure that the beak is held closed. The whole must now be placed into a box filled at one end “three-fourths up to the top, with cotton, forming a sloping plane”, making a hollow to hold the bird. There follows some detailed information about supporting the head during the drying process and the advantage of Waterton’s method is that the whole skin can be manipulated during drying in a warm room, or something similar, to ensure a natural posture.

The finished product therefore contains no wires or internal support and is just a hollow skin. We know that some quadrupeds were prepared using the same procedure and it is clear that Waterton was a true craftsman and must have spent many hours on this careful work when he wasn’t on the adventurous part of his Wanderings, or walking around the Walton Hall estate and climbing trees to get a better view of birds. It is clear that birds were his main interest, although his collection had a much wider range.

The Fourth Journey includes the description of what appears to be a new species: 2

I also procured an animal which has caused not a little speculation and astonishment. In my opinion, his thick coat of hair, and great length of tail, put his species out of all question; but then, his face and head cause the inspector to pause for a moment before he ventures to pronounce his opinion of the classification. He was a large animal, and as I was pressed for daylight, and moreover, felt no inclination to have the whole weight of his body upon my back, I contented myself with his head and shoulders, which I cut off, and have brought them with me to Europe.. 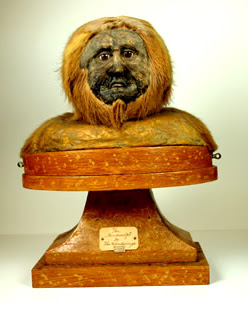 What was this creature?

We are immediately alerted to something odd, as Charles was careful to prepare whole specimens rather than parts. The “Nondescript” was a hoax, formed from the rear end of a monkey and it was Charles Waterton’s skill in manipulating skin treated with corrosive sublimate that allowed him to mould a human face from its hind quarters. This introduces us to a side of Charles Waterton that was rather eccentric - what has been termed Anthropomorphic Taxidermy. 3 In addition to the “Nondescript”, believed to be an attack on the seriousness of many naturalists, Waterton also produced montages of manipulated specimens. Henning 3 describes these as being “..political satires: critiquing government policy or taking a swipe at Protestantism, or both. A man of his class would usually have entered into politics, but as an English Catholic, Waterton refused to take the Oath of Allegiance. Taxidermy was his craft and his chosen means of expression”.
The titles of the satirical preparations show the intent: for example, we have “Martin Luther after his Fall” and “John Bull and the National Debt”, so the message is obvious. In the Conclusion of her philosophical paper on Charles Waterton’s taxidermy, Cristina Grasseni writes: “Waterton attained his identity of ‘eccentric’ through the negotiation of his role as an aristocratic Catholic with ‘curiosity’ about natural history; Waterton’s social and religious position informed his construction of a different relationship to the animal world: his persona was in part actively constructed, in part externally constrained.” 4 It is easy to see how some of Charles Waterton’s activities were considered eccentric, but this hides his seriousness and also real human warmth, despite the angry exchanges with those whose work he disliked. Henning provides us with a summary:

This Roman Catholic aristocrat, naturalist, and taxidermist became famous through the publication of his Wanderings in South America.. ..and gained a reputation for eccentricity. His reputation was partly based on his commitment to providing a safe haven for wildlife, his outspoken criticisms of his peers, as well as his refusal to conform to the conventions of his time.

It is difficult not to feel affection for Charles Waterton, but also to realise how frustrating he could be - especially for those with a scientific approach to the study of animals, or those that could not accept his religious and political “satire”. However, no one questions his outstanding skill as a taxidermist and he was certainly not dull.

2 Charles Waterton (1973) Wanderings in South America, the North-West of the United States, and the Antilles, in the years 1812, 1816, 1820 and 1824 with original instructions for the perfect preservation of birds and for cabinets of natural history. London, Oxford University Press.