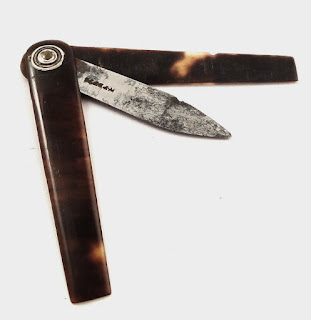 The treatment of illness and infection in the first half of the nineteenth century was quite different to the highly technical and pharmacological interventions of today. Much knowledge of potions was still in the hands of herbalists and apothecaries, the latter preparing mixtures from large jars of various herbal extracts and chemicals, which they kept in their shops. There was very limited use of anaesthetics and a common method of treating infections was by bleeding using leeches or cupping. 1 Charles Waterton (1782-1865), the noted traveller and Natural Historian, consulted doctors, but treated fevers and most ailments himself - even when afflicted with malaria and other serious vector-borne diseases.
In addition to being expert at dissection, having acquired much practice through his work in taxidermy, Charles Waterton was also skilled in the use of a lancet (an example is shown above) and the first step in his self-treatment was to “open a vein” and allow at least a pint of blood, sometimes considerably more, to pour out. This was accompanied by taking calomel (mercurous chloride, Hg2Cl2) and jalap (a powder derived from the tuber of Ipomoea purga and originating in Mexico). Calomel and jalap have very similar properties in being purgatives and also cathartic, causing rapid emptying of the bowels. Waterton always seemed to feel better after bleeding and purging and this seems linked to his devout Catholic faith. Bleeding is an important symbol in Catholic mysticism, and this may also be said of flagellation, and Charles’ own treatments do have an echo of gaining both medical and spiritual relief. It’s as though he expects the illness to leave his body rapidly, in the manner of an exorcism.

Other treatments used were typical of the times. For example, it has been known that quinine is effective in reducing the effects of malaria (it causes death of the protozoan parasite) and that the best-known preparation of quinine comes from the bark of Cinchona trees in the tropical jungles of South America. The preparation is known colloquially as “Jesuit’s Bark” (Jesuit missionaries propagated its use) and this would have resonated with Charles; indeed, he may have heard of it from his time at Stonyhurst, the Jesuit school where was educated and which meant so much to him. Natural materials were also used to treat other medical problems. For example, Charles applied poultices to surface wounds as a means of providing heat 2 and what better compound than boiled cow dung?

When 68-years-old, Charles had two accidents that broke bones in his arm and, in the manner of the times, these were allowed to heal naturally. Unfortunately, this wasn’t effective and Charles was persuaded to contact the local bonesetter who made regular visits to his home, Walton Hall, to re-align the bones. There was no anaesthetic and Charles did not drink alcohol, so there was no recourse to that way of boosting courage. The treatment by the bonesetter must have hurt a great deal but it was endured with stoicism and it appears to have been successful.

Should Charles have been unfortunate enough to be bitten by a rabid animal, he was sure of the action that should be taken - the injection of wourali. One of the purposes of the first of his “Wanderings” in Guyana was to contact native Indians and find out more about wourali, which they used for hunting. The poison, also known as curare, is prepared from a number of liana vines (including those of the genus Strychnos, the likely source of Waterton’s wourali 3) and is a powerful muscle relaxant. It is effective when injected but the active molecules are not passed across the digestive tract, so the game killed by darts tipped with wourali is not toxic to those eating their flesh. Although wourali was known to the outside World, and an important presentation on the effects of the material was made to the Royal Society by Brodie in 1811, it was Charles Waterton who brought original wourali from Guyana to Europe and showed its effectiveness in demonstrations on large animals, having seen its action on his travels in South America.

To mark the bicentenary of Waterton’s birth, the Yorkshire Society of Anaesthetists held a Symposium at Walton Hall on 5th June 1982 and the Proceedings were written up in Volume 55 of the British Journal of Anaesthesia and published in 1983. In addition to the discussion of wourali, there are papers on Charles’ taxidermy and on his collections which are now held by the Wakefield Museum where a new display opened in 2012, including a case featuring poison darts collected by Charles on the “First Wandering”.

In his paper “Waterton and Wourali”, 4 W.D.A.Smith outlines Charles Waterton’s accounts of the effect of wourali on animals of a range of sizes and then the demonstration conducted at the Veterinary College in London:

“Waterton then described the famous experiments, performed with wourali upon asses in 1814, on his return to England. One ass survived injection of wourali into the leg below a tightened bandage, but died upon loosening it. A she-ass was apparently dead in 10 minutes but was revived by regularly inflating the lungs for four hours, using bellows inserted through an incision in her wind-pipe. She was re-named Wouralia and Earl Percy sent her up to Walton Hall to live in peace.”

Wouralia lived for many years and there is an element of whimsy in the story of her life, something that fits well with that side of Charles Waterton’s nature.

“In his Second Series of Essays on Natural History (1844), Waterton described how he was called to a Nottingham police officer called Phelps who had hydrophobia, but arrived too late. However, using dogs and two asses, he demonstrated the effects of wourali and the effectiveness of artificial respiration to a large audience at the Medical School.. ..According to Waterton the audience was convinced that because the virulence of wourali was under the control of the operator, it could be used in cases of hydrophobia. He recommended that no other remedy be tried simultaneously.”

Charles Waterton thus brought wourali to a wider medical public, by his demonstrations and also through his connections with Earl Percy and others - like Sir Joseph Banks FRS, the famous Botanist, Natural Historian and traveller. 5 Charles did not lack friends in high places, but equally felt very at home with his travelling companions and those he met in and around the estate in Yorkshire. He was a most interesting man and far from being just an eccentric, as readers of Edith Sitwell's English Eccentrics might assume, given that Sitwell gives him a chapter all to himself.