What to wear on the shore


Many of us have enjoyed looking at algae and animals in rock pools during visits to the seaside. That is especially true for families with young children, happy to see the organisms in their natural surroundings, rather than as video clips or in TV programmes.

In the Nineteenth Century, the “craze” for Marine Biology drew many adults to the coast, both to examine algae and animals in situ and also to collect organisms for their aquarium tanks. Then, parlour aquaria were a relatively common feature in middle class homes and these allowed close observation, something that was not always possible on the shore, as many features only became apparent once individuals were under water.

A striking difference between the contemporary and the Nineteenth Century collector was in the way each dressed. Now, we wear shorts, jeans and T-shirts during summer visits to rock pools, perhaps with flip-flops to provide protection for the feet from sharp coatings of barnacles, or to reduce the chance of slipping on slimy seaweeds. If we wish to wade in pools we may wear boots and, in deeper water, thigh waders or chest waders. Then we have the option of looking underwater using snorkelling or SCUBA diving, perhaps with a wet suit for protection. All this would have been alien to those involved with the “craze” when it was at its height in the second half of the Nineteenth Century. At that time, collections in deep water were made by trawling, or dredging, from small boats, so there was no chance of making in situ observations. It was also a matter of luck as to what appeared when the net, or dredge, was emptied on board.

Whether collecting from boats, or on the shore, men wore everyday outdoor clothing, but obviously not the newest, and soakings were a common feature. Henry Gosse, whose books did much to encourage the “craze”, was certainly adventurous as his son, Edmund, describes:

The way in which my father worked, in his most desperate escapades, was to wade breast-high into one of the huge pools, and examine the worm-eaten surface of the rock above and below the brim.. ..My Father would search for the roughest and most corroded points of rock, those offering the best refuge for a variety of creatures, and would then chisel off fragments as low down in the water as he could. These pieces of rock were instantly plunged in the salt water of jars which we had brought for the purpose. When as much had been collected as we could carry away - my Father always dragged about an immense square basket, the creak of whose handles I can still fancy that I hear - we turned to trudge up the long climb home. 1 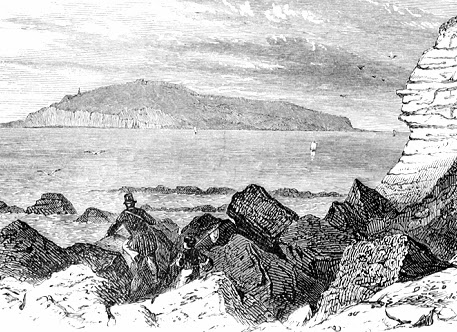 Collecting was not a casual pastime for Henry, but a mission to find out as much as possible about the organisms of the shore. His industry was most impressive, especially when compared to the more passive approach of today. As to his selection of clothes, Edmund writes:

Even as a little child I was conscious that my father’s appearance on these excursions [collecting trips] was eccentric. He had a penchant for an enormous felt hat, which had once been black, but was now grey and rusty with age and salt. For some reason or other, he seldom could be persuaded to wear clothes of such a light colour and material as other sportsmen affect. Black broadcloth, reduced to an extreme seediness, and cut in ancient forms, was the favourite attire for the shore, and after being soaked many times, and dried in the sun on his somewhat portly person, it grew to look as if it might have been bequeathed to him by some ancient missionary long marooned, with no other garments, upon a coral island. His ample boots, reaching to mid-thigh, completed his profession garb, and when he was seen, in full sunlight, skimming the rising tide upon the sands, he might have been easily mistaken for a superannuated working shrimper. 2

So, a good covering of clothes, but with accumulated grime (also typically seen in pictures of working men of the time). Nevertheless, this scruffy costume allowed a great deal of freedom of movement and permitted excursions into pools and into the shallow sea. Clearly, there were more challenges for women collectors, especially with Victorian decorum demanding that most of the body was covered in a long-sleeved and long-skirted dress (an example of a mid-Century outdoor dress is shown below). 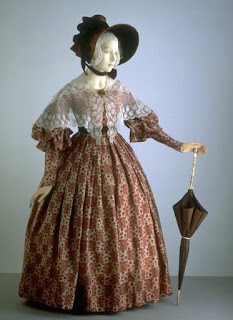 Although women made notable contributions to the development of Marine Biology in the Nineteenth Century, their clothing had to conform to the sensibilities of the time and they could not be as adventurous as Henry Gosse in plunging into pools. However, there was a shared need to clamber over rocks and sand and one of the leading authorities on seaweeds, Margaret Gatty, the wife of a vicar, gives the following advice:

About this shore-hunting, however, as regards my own sex (so many of whom, I know, are interested in the pursuit), many difficulties are apt to arise; among the foremost of which must be mentioned the risk of cold and destruction of clothes. The best pair of single-soled kid Balmoral boots that ever were made will not stand salt water many days - indeed would scarcely “come on” after being thoroughly wetted two or three times in succession - and the sea-weed collector who has to pick her way to save her boots will never be a loving disciple as long as she lives! Any one, therefore, really intending to work in the matter, must lay aside for a time all thought of conventional appearances, and be content to support the weight of a pair of boy’s shooting boots, which, furthermore, should be rendered as far water-proof as possible by receiving a thin coat of neat’s foot oil, such as is used by fishermen.. ..Next to boots comes the question of petticoats; and if anything could excuse a woman for imitating the costume of a man, it would be what she suffers as a sea-weed collector from those necessary draperies! But to make the best of a bad matter, let woollen be in the ascendant as much as possible; and let the petticoats never come below the ankle. A ladies’ yatching [sic] costume has come into fashion of late, which is, perhaps, as near perfection for shore-work as anything that could be devised. It is a suit consisting of a full short skirt of blue flannel or serge (like very fine bathing-gown material), with waistcoat and jacket to match [see 3 for an example]. Cloaks and shawls, which necessarily hamper the arms, besides having long ends and corners which cannot fail to get soaked, are, of course, very inconvenient, and should be as much avoided as possible.. ..In conclusion, a hat is preferable to a bonnet, merino stockings to cotton ones, and a strong pair of gloves is indispensible. All millinery work - silks, satins, lace, bracelets, and other jewellery, &c. must, and will, be laid aside by every rational being who attempts to shore-hunt. 4

Nineteenth Century women thus needed to overcome the restrictions provided by the dress mores of the day. It was easier for men, but followers of the “craze” of both sexes showed an application and enthusiasm for discovery that is unusual today, except perhaps in young children. However, the attention span and stamina of children means they are unlikely to spend hours each day on collecting, followed by hours more observation and research once the catch is returned home. That was the norm for the adult enthusiasts of Marine Biology in Victorian times.

2 Edmund Gosse (1896) The Naturalist of the Sea-Shore: The Life of Philip Henry Gosse. London, William Heinemann.

3 This is an example of a boating costume contemporary with Margaret Gatty’s description from 4 below: http://www.vam.ac.uk/content/articles/i/interactive-womans-boating-outfit-about-1872/

4 Mrs Alfred Gatty (1872) British Sea-Weeds drawn from Professor Harvey’s “Phycologia Britannica”; with descriptions, an amateur’s synopsis, rules for laying out sea-weeds, an order for arranging them in the herbarium, and an Appendix of new species. London, Bell and Daldy.