Looking in seashore rock pools always thrilled me as a child and my fascination with Aquatic Biology started during many visits to the shores of Torbay. I always followed an instruction from a book that stones in rock pools should be replaced in the same position, and with the same side upwards, as they were an important shelter and substratum. The idea was to look, see as much as possible, and then return the habitat to its natural state and this was an early lesson in conservation. The visits provided me with strong and lasting memories of what seemed like a primeval world, especially at the lowest spring tides. 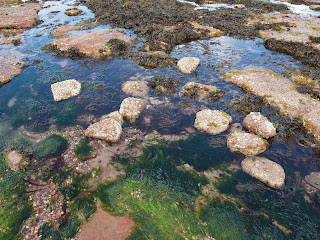 Enticingly, some pools had large stones in them and turning these over was the best way to see many types of fish, crabs and other animals; the more obvious types that appeal strongly to children. I was also intrigued by sea anemones and the way they extended their tentacles while under water and then contracted them, together with the anterior of the body, when the tide went out. I never saw them catch anything, but there was always the thought that I might. 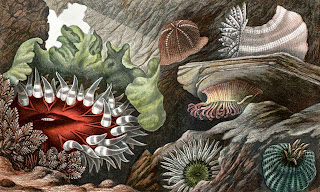 A hundred years before my explorations, Henry Gosse, an expert on sea anemones, had collected in some of the same rock pools in South Devon, although his sampling was aided by the use of a hammer and chisel when he was collecting specimens for aquaria. He was thus not the careful conservationist that I was attempting to be, but he was certainly aware of the much greater damage that humans could do to shores. In his first visit to St Marychurch, Torquay, Henry developed a fondness for one location at Oddicombe:

The tidal basin became one of the most constant of his haunts, and he nourished a jealous and almost whimsical affection for it, suffering from a constant fear that its crystal beauty might be profaned. Every day the high tide renewed its freshness, and then, retreating, left the basin to settle into glassy calm.. ..Strangely enough, this exquisite little freak of nature survived, untouched, for nearly twenty years after its discovery. At last, one day when my father climbed up to look into it, behold! Some thrice-wretched vandal had chiselled a channel on the seaward side, not very deep indeed, but enough to destroy its unique regularity of form. He never went to it again. 1

Human interference thus ruined the feeling Henry had for this large pool and he would have been more accepting if the erosion had been natural. Even though he was a profound Creationist, Henry knew that the erosive power of the sea changed coasts. He may even have seen these changes as a form of “geological evolution” [not his term], just as we now know that sea levels have been affected by glaciation and are likely to be affected by anthropogenic global warming. Oddicombe, the area where Henry’s tidal basin was located, has recently been altered further by the action of landslides, emphasising that coastal erosion can come from the landward side as well as the seaward.

All of us are familiar with the notion of an idealised location, like Henry’s tidal basin and my rock pools, and we do not take kindly to anything that changes that idea, especially when it is caused by human interference. It may be a wood, a meadow, a stream, or another habitat that has become heavily impacted by tree felling, farming, or canalisation. Yet, we know that change is inevitable with our growing population size and that is why there is a pressing need to conserve and restore habitats. Interestingly, restoration is usually to a state representative of the recent past rather than a pre-human condition. This is logical for Creationists, as they believe that humans came into existence only days after the first living organisms but, for those that accept that humans have been on Earth for a tiny fraction of the time that life has existed, one might expect that there would be acceptance of restoration to the pre-human state. Is that achievable - or desirable?

1 Edmund Gosse (1890) The naturalist of the sea-shore: the life of Philip Henry Gosse. London, William Heinemann.