More on the Natural History of the Unmentionable


The Renforsen rapids on the Vindel River in Sweden are at their most tumultuous during snow melt in the mountains and surrounding lands. A large volume of water then passes downstream and Renforsen becomes highly turbulent, as can be seen in the photograph below. The water contains many fine mineral particles and fragments of organic matter, but also some most important aggregates. 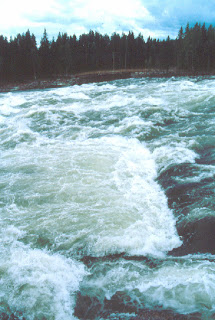 In 2001, the late Björn Malmqvist and I, together with Yixin Zhang, took water samples at Renforsen and found that they contained faecal pellets that we recognised came from blackfly larvae living on, and within, the substratum of the river. These insects collect particles from the water passing over them and push the material collected through their tube-like gut in about 45 minutes. There is no mixing and less than 5% of the material taken in is digested or otherwise assimilated, with the final section of the gut compressing the gut contents to produce pellets. Larvae feed continuously, so each larva is like a machine for converting very many tiny particles into much larger faecal aggregates. As there are millions upon millions of larvae on the bed of the river, it would be expected that there will be huge numbers of faecal pellets in transport. That is what we found. 1

93.7, 47.5 and 69.2 tonnes dry mass of blackfly larval faecal pellets passed an imaginary line across the river at Renforsen each day during three successive summers. 1 Without the blackfly larvae producing aggregates, it is likely that much more material would have been carried downstream and, eventually, to the sea. Of course, this is the fate of some of the faecal pellets, but many are retained within the river as they fall through the water of the slower-flowing reaches. They thus have an important impact on the river community in transferring matter from the water column to the substratum, where most micro-organisms, algae and animals live. Our findings so impressed the producers of the Swedish children’s TV series Myror i brallan (“Ants in your pants”) that a section of one of their programmes in November 2011 was devoted to the story of this transformation, 2 with the presenter saying: “Every day, the amount of blackfly poo drifting down a river would fill a whole house.......” 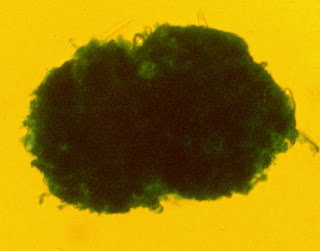 If the numbers of pellets produced is impressive, so is their constitution, as most of them appear to be intact despite the highly turbulent flow. This is partly because they are small and are thus bounced around in the current, but also results from the way they are stuck together. In the photograph above, the blackfly faecal pellet from the Vindel River (about 0.5 mm across) is blue in colour and this was the result of staining with a dye for complex carbohydrates (exopolymers). It is clear that these binding agents are found throughout the aggregate, yet the exopolymers are not produced by the larva, but are collected from the water column or exuded by micro-organisms and algae that have been ingested. The secretions are “Nature’s glue” and are the principal binding agent of the faecal pellets of all animals, although some animals produce their own exopolymers in the form of mucus from cells in the gut wall.

Not only do pellets remain intact as they pass through rapids, but they stay as aggregates for weeks after they pass to the substratum, so their value to the microbial, plant and animal community is not only short term. They provide nutrients and also food for the many animals that eat them. It is a pity that faecal pellets and their fate has been so little studied, although attitudes to their importance in flowing fresh waters is changing. 3 Perhaps scientists are affected by the general approach to the subject? It is not what most people first think of when discussing the Natural History of streams and rivers and one can imagine this conversation as being typical:

“So, you’re an Aquatic Biologist”

“Yes. I’m so pleased to be able to have spent a lot of time doing something that I loved from childhood”

“What do you study? Whales and dolphins?”

“I’m afraid not. I have spent most of my career looking at rivers and streams”

“At salmon and trout?”

“Actually, I’m fascinated by the importance of faecal pellets produced by invertebrates”

Of course, the exchange has not taken place, but it might have done, as it shows the popular liking for large organisms and distaste for excreta, as discussed in my previous blog post on this subject. Fortunately, the young viewers of Swedish TV were provided with an enlightened exception to this general rule and that is an example for us all.

My thanks to Dr Brendan McKie for alerting me to the Myror i brallan programme.