Emily Gosse - a notable evangelical Christian and writer of tracts


Emily Bowes, later Emily Gosse, came from a family that had suffered financial misfortune and, as a result, she needed to work as a governess, spending several years looking after the education of the young children of a clergyman in Berkshire and then a family of orphaned children in Sussex. It was a vocation for which she was well suited, as she had a kind and thoughtful nature.

From an early age, Emily had been a Christian and she developed a commitment to evangelism. She was never strident, and her interest in others was genuine and human, but she was driven to speak about her faith and how important it was for individuals to accept that Christ died for their sins. Having been moved by the writings by evangelists, and having listened to many preachers of that type, it was natural to her to use her own writing skills to produce religious poetry and prose. She handed copies of tracts that she had written to anyone she met, to reinforce the message put across in conversation. On the dust cover of Robert Boyd’s affectionate and well-researched book Emily Gosse: A life of faith and works, 1 Dr Stephen S. Short praises Emily’s poetry (her published poems are included in the book) and writes “I cannot doubt that all who read the work will be spiritually enriched”. She was clearly talented and became one of the most prolific writers of religious tracts in the Nineteenth Century. 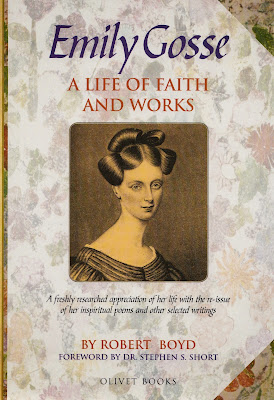 When Emily moved to London in 1841 to look after her infirm mother, she joined a group of Brethren in Hackney, that had been formed by two brothers who had left the Quakers. 1 This small group, numbering less than twenty were:

a collection of Christians who met as such out of all different sects,... endeavouring to revive the brotherly love of the early Christians by persuading all who love the Lord Jesus Christ to meet together without quarrelling about their little differences, taking the Bible only as their rule of life, the Holy Spirit as their teacher, and God as their only head and master 2

Odd, then, that such an inclusive group was formed after a split from a more established sect and their beliefs were rather less inclusive than this quote suggests. It was at the Brethren meetings that Emily met Philip Henry Gosse, the great Natural Historian, and we know from his writings that Roman Catholics, for example, were to be looked down upon and their creed rejected. This is puzzling to me, as all Christians have the Bible as the written basis for their beliefs and all accept the existence of the Trinity and the death of Christ on the cross. However, I will not dwell on that here.

Henry Gosse and Emily Bowes were married on 22nd November 1848 and they shared views on living by faith. It was a warm and happy relationship and Emily, with her outgoing nature, helped to overcome Henry’s sometimes acute shyness in public. She also encouraged him in his writing and research and was happy to work quietly for hours when Henry was occupied with reading, or in investigating some organism. Their son, Edmund, was born on 21st September 1849, when Emily was nearly forty-three years old. It was a time when child mortality was high and the parents of an only child, as Edmund was likely to be, had particular fears. As Emily wrote:

We have given him to the Lord, and we trust He will early manifest him to be His own, if he grow up. And if the Lord take him early we will not doubt that he is taken to Himself. Only if it please the Lord to take him, I do trust we will be spared seeing him suffer in lingering illness and much pain. But in this, as in all things, His will is better than we can choose. 2

It wasn't Edmund who became very ill and who had to suffer, but Emily. When Edmund was not yet seven-years old, she discovered a lump in her breast and this was diagnosed as cancer. Having taken advice from medical practitioners, Henry and Emily decided to follow a treatment by Dr Jesse Weldon Fell that was based on a plant-derived ointment used by native Americans. Part of the attraction was that Dr Fell assured them that there was little pain associated with this approach. Unfortunately, this was not true and neither was the ointment effective, so the tumour, with its associated pain, became worse and Emily had eventually to go through several surgical procedures for piece by piece removal of the growth, by which time she had secondary tumours in her lungs and lymphatic system. At the end, she tried homeopathic treatments that led to "a manifest improvement”, 3 giving both Emily and Henry some relief from their suffering. The use of homeopathy, dependent as it is on faith rather than science, was appropriate in the Gosse household. Emily died on 10th February 1857 and, to the end, she did not appear to fear death, viewing it as God's will and a chance for her to be with Jesus in Heaven. Even when dying, she had tracts sent out in the hope that more people could share her vision.

Apart from books such as Emily Gosse: A life of faith and works, 1 Tell Jesus: Recollections of Emily Gosse  3 and Henry’s own A memorial of the last days on earth of Emily Gosse,4 most of us have learned of the Gosse family from Edmund’s Father and Son, 5 subtitled A study of two temperaments. Written, anonymously, fifty years after Emily’s death, it conveys a different impression of the value of Henry’s and Emily’s particular religious beliefs, although I am well aware of problems with the reliability of Edmund’s account, as he had a casual approach to accuracy. 6 When father and son moved to Torquay in 1857, all was well between them, as they grieved and supported each other. The high spot came days after Edmund’s tenth birthday when he was baptised as an adult believer in the same brand of Christianity followed by his father and mother, fulfilling Emily’s wishes. Their closeness was maintained when Henry married Eliza Brightwen in 1860, a lady who admired Henry and shared his beliefs. 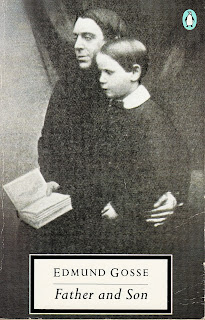 Although he was developing independent views as an adolescent, Edmund’s permanent move to London when aged seventeen brought a much wider range of perspectives and influences. Henry became very worried about these changes, especially the new friends that Edmund made from the liberal thinking world of the Arts. 6 In writing about the descriptions in Father and Son, Boyd comments: “It would seem that in the circle of Edmund’s friends in London, he felt embarrassed by his mother’s [and father’s] faith and so is somewhat dismissive of it.” 1 [my parenthesis].

It was impossible for evangelical Christians like Emily and Henry Gosse to accept that there are other views and, indeed, much of their life was spent convincing themselves and others that they were right in having their beliefs. Questioning would be something sent by Satan and must be dismissed, locking them into their narrowness. One can sense that this single-mindedness, while being a marvellous support for evangelical Christians like Emily and Henry, is oppressive to anyone that does not accept these views, and especially for those that are brought up with them. It is easy to see why Edmund Gosse felt the way he did, despite having such lovely parents, and he eventually gave up talking to his father about their differences. I empathise with Edmund, yet I admire both Henry and Emily very much - although I suspect I would not always feel comfortable in their company.