The Creation Resources Trust has seven statements of belief, 1 of which these are two:

The acts of creation described in Genesis took place a few thousand rather than millions of years ago. This means that the earth and universe are quite young, which is consistent with much scientific evidence and biblical chronology.

The great flood described in Genesis was an historic event, world-wide in its extent and its effect. Most of the earth's fossil-bearing sediments were formed during this great cataclysm.

Among Christian Creationists, there is agreement that life on Earth began approximately 6,000 years ago, whereas those who accept that evolution provides the best explanation of the diversity of living organisms propose that life began with an original single cell about 3,500,000,000 years ago. I give the numbers in full to get a better sense of the difference between the time scales of the two opposing views.

Two further statements from the Creation Resources Trust are fundamental to the views of Christian Creationists - their absolute belief in the literal truth of The Bible:

The whole Bible is the written word of God, divinely inspired and without error in its original manuscripts. Therefore all its assertions are scientifically and historically accurate, including the account of the origin of the universe, the earth and the life upon it recorded in the book of Genesis.

All the basic types ('kinds') of living things, including human beings, were created by direct acts of God during six literal days, as described in Genesis chapter 1. There was potential for wide variation within those types, but no possibility of evolution from one type to another.

Thus, The Bible, as the word of God, is absolute, so there cannot be any question as to its veracity on all points. The account of Creation in Genesis seems improbable and I am astonished to read that: “The theory of evolution, despite being widely believed and taught, has not been scientifically proven, the available evidence being overwhelmingly in favour of the biblical record of creation.” 1 Really? 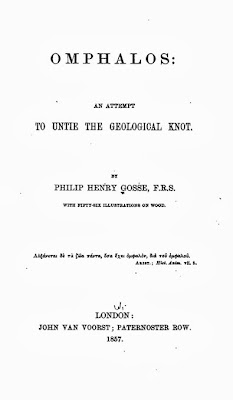 I wonder what contemporary Creationists make of the account given by Philip Henry Gosse in Omphalos? 2 He is the sole Creationist that I have come to know well, although only through his writings and those of his biographers, as he died in 1888. Henry Gosse was a member of the Brethren, a believer in the literal truth of The Bible and someone who found developments in geology during the mid-Nineteenth Century to challenge his beliefs. That is why Omphalos is sub-titled an attempt to untie the geological knot. In the book, Gosse shows his excellent knowledge of geological time periods and accepts that many thousands of years were needed to produce coal seams, with many rock strata taking much longer to form. Gosse then introduces his theory of prochronic and diachronic existence to resolve the conflict between those that believe in geological time scales and those who do not. Diachronic refers to all matter and organisms that have existed since the Creation, whereas rock strata, fossils, etc. that are more than a few thousand years old, provide evidence of an existence before time - before the act of Creation. Gosse’s explanation is now rarely mentioned and the current view, as in the statement from the Creation Resources Trust, is that strata and fossils result from the Great Flood, events that would have been impossibly cataclysmic. It was a view with which Gosse would have been familiar, but was seemingly unable to accept. I have affection for Henry Gosse and know well the challenges brought by his absolute faith; 3 a faith that provided support and meaning, but made him a prisoner, unable to accept views that challenged his narrow interpretation of The Bible. It didn’t help that he was part of a small, and isolated, group of believers who reinforced each other’s restricted views.

Creationists accept that evolution occurs, 4 but only in providing small shifts resulting in varieties of organisms whose basic structure is unchanged. In a World that has existed for c 6000 years there will be many such changes, but what about changes that happened over, say, 1,000,000 years or 1,000,000,000 years? There are many varieties of domestic animals - look at the range of types of dogs, sheep or cattle, for example - and these result from selective breeding. Is it possible for Creationists to accept (theoretically, of course) that such changes can also result from natural barriers to reproduction, allowing separate and distinct populations to result?

Whether one is a Creationist or an Evolutionist, we must all accept that individual organisms are the result of genes which provide the code for an individual's structure and function and it is the genetic blueprint that is passed from one generation to the next. We must also all accept that, during the replication of genetic material, mutations occur and these may affect the biology of the organism. If mutations result in changes that make an individual more successful in its environment, it follows that these mutations are likely to be passed on to offspring and thus spread through successive generations. It is this sequence that controls the microevolution accepted by Creationists and the whole process of evolution accepted by those who see this as the mechanism whereby new types of organisms occur over long periods of time.

The main conflict between Creationists and Evolutionists is caused by religion; some Christians finding it impossible to accept that changes occur without the need for a Creator. It was this view, accepted increasingly in the Nineteenth Century, that so offended Henry Gosse. His theory of prochronic existence has now largely disappeared, and it was criticised by both the contemporary scientific and religious communities, but he still had his absolute Christian faith. There have certainly been changes of opinion among Christians over time and there are many who can accept evolution without feeling that this is a threat to their belief in Christ and His message. Of course, questioning the literal truth of The Bible then brings problems of exegesis, in that decisions need to be made about what is factual and what is metaphorical.

I am firmly in the Evolutionist camp, but I have no idea how the first cell came into existence and cannot imagine what mutations led to all the changes that resulted in the diversity of life forms that exist, or have existed. I accept my ignorance and know that I will never get answers, as I cannot understand the time scales involved and cannot comprehend all the changes that have occurred in the environment to allow the selection of mutations. I have no “truth” to defend.