Drinking water and the “miraculous” power of sand


In the developed world, we sometimes take drinking water for granted. Turn on the tap, or faucet, and out comes a seemingly endless supply of water that is safe to drink. Of course, the supply is not only used for drinking and cooking and, in London, < 5% is used for this purpose. 1 The rest of this high quality water we use for personal washing and bathing; cleaning all manner of domestic items, from dishes to surfaces; we use it to wash cars and in high-velocity cleaning jets; and, often in quantity, to water our gardens and yards. Just as we have little interest where waste water goes (we know that it goes into a sewerage system of some kind and is therefore removed from our dwellings), most of us are not aware of how our drinking water is treated. We know it comes from the Water Company pipe system and originally from rainfall on to land, and we are also aware that supplies need to be maintained, so know that reservoirs may be constructed to hold water that might otherwise be lost as rivers flow to the sea. In some areas, we know that supplies come from boreholes into an aquifer within permeable rock strata.

Whether water comes from an aquifer or from surface run-off, it must first be treated to ensure that it is safe and does not have a bad taste. A number of treatment methods are used by Water Companies, but a common one is the use of beds of sand through which water is allowed to trickle and I will only discuss this one method here.  Slow sand filters take up a lot of space and a works may consist of more than ten beds, each of surface area > 1000 m2. A bed consists of a concrete tank with porous bricks over its base, these being overlain with cobbles and then a thick layer of sand. Water is pumped into the tank above the level of the sand to a depth sufficient to create a head of pressure and it then percolates through the sand, cobbles and bricks, exiting from a pipe low down in the bed. Although slow sand filters may be used to “finish” water that has been pre-treated, they are effective at cleaning very dirty water and making it potable. During a visit to Japan, I visited the city of Ueda, where water of poor quality is drawn from a polluted river and fed to slow sand filter tanks that have masses of filamentous algae growing in them. Some of the organic matter is thus converted to large numbers of algal cells and these also charge the underlying sand with oxygen resulting from their photosynthesis. No-one would be tempted to drink the water in the bed, yet the quality of the filtrate is excellent, as I learned when trying a sample - it was crystal clear and sweet-tasting. So what is the “miracle” of the sand? 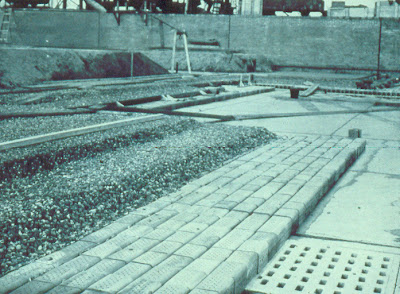 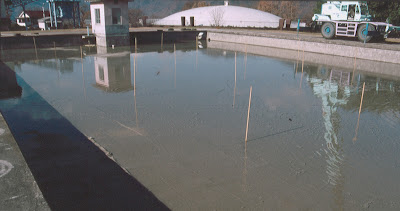 A filter bed at Ueda, Japan.

Beds of sand act as a physical filter for particles that cannot pass through the pores between grains, but how do the filter beds remove fine particles of organic matter, bacteria, and the like? A visit to a newly-laid slow sand filter gives us a clue to answering this question because water must pass continuously through the column of sand for days before the filter becomes effective. In this time, the sand grains become covered with microbial biofilm (directly analogous to the plaque we brush from our teeth) and this film is responsible for the removal of impurities, some of which become stuck on the matrix and some of which are taken up by the micro-organisms contained within the film (and which exude this sticky coating). Of course, pores must be kept open and this is achieved by a complex community of single-celled organisms that graze on the biofilm, while some of these organisms also capture fine particles from the water passing between sand grains. There are animals present too, with small worms of various kinds being abundant, feeding on organic matter and, in so doing, further ensuring that pores remain open. This complex community, that takes time to develop, keeps microbial activity in check and ensures that fresh adsorptive biofilms are developed continuously. It is a process that occurs within stable sand banks in natural water bodies and, in slow sand filters, we use it for our own purposes. In engineering a system for cleaning water for human use, we didn’t realise that we were adapting an ecosystem that has been in existence for hundreds of millions of years, a very considerable time before humans appeared.

One of the benefits of slow sand filters is that they can be used, on a small scale, by village communities, where water purification from polluted sources becomes possible, with obvious benefits for health. 2 As with large-scale filters, the continuous process does require maintenance. If the water is rich in particles and nutrients, it is likely that a schmutzdecke (“dirty layer”) will form at the sand surface and this results in blocking and inefficiency. This is significant when a city needs a constant supply. There are a number of solutions and these include covering beds to reduce biological activity in the water column as, even with pre-treated water, there can be a considerable build up of algae and other matter in beds open to the atmosphere. Open beds are colonised by very large numbers of dancing midge larvae, many of which live within silk tubes on the surface of the sand. They graze over the surface and thus keep pores clean, transforming the organic matter into faecal pellets that are well-bound and therefore do not obstruct the functioning of the bed. The larvae thus play an important role in the functioning of the filter and may be found in densities approaching 50,000 per square meter; an additional benefit being that the silk of the tubes produced by many larvae is highly adsorptive and thus adds to the cleaning process. There comes a time when the bed, whether large or small, will need to have the surface of the sand scraped off and removed. Re-filling the bed with water then allows filtration to proceed, as the underlying sand is well-conditioned, and re-colonisation by midges begins within minutes. 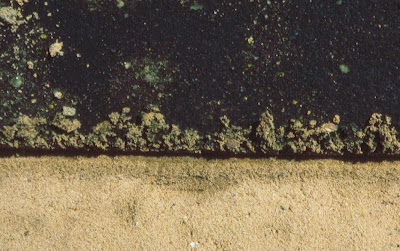 The cleaned surface of a sand filter - the upper part shows the schmutzdecke that eventually reduced the efficient performance of the filter. The sand in the lower part is conditioned with a rich microbial community together with many other types of organism.

That water is cleaned by passage through beds of sand has been known since ancient times, so the engineers of the last few hundred years were following an established principle. In the first of the Great Plagues of Egypt we know that surface waters became undrinkable because something turned all water both red and toxic. I have argued that this redness resulted from the erosion of sediments that subsequently caused the widespread death and decomposition of aquatic organisms, and that this poisoned the usual sources of drinking water. 3 Interestingly, we read in Exodus Chapter 7 verse 24 that “....all the Egyptians digged round about the river for water to drink; for they could not drink of the water of the river.” 4 In a commentary, 5 we read further: “The Egyptians dug round about the river for water to drink, and it seems that the water obtained by this means was not bloody like that in the river...” and I suspect that they were digging down into sand deposits, through which water had passed and been purified by the microbial community coating the sand grains. It would not be regarded as a miracle, although it might seem to be such by some observers. Miracles usually have a rational explanation and we know just how “miraculous” water treatment using sand filters appears to be in providing us with the drinking water that is piped into our homes. If we don’t take the supply for granted, that is.