Edmund Gosse on an “accidental portrait” of his father


Edmund Gosse wrote Father and Son as “a record of a struggle between two temperaments, two consciences and almost two epochs. It ended, as was inevitable, in disruption.” 1 It was published in 1907, nineteen years after the death of his father, Philip Henry Gosse, and describes the closeness, and then the developing tension, between them. The disruption in their relationship described by Edmund centred on Henry’s immovable and narrow religious beliefs that dominated his life and that of his son, until Edmund broke away. 2

In 1890, Edmund wrote an earlier biography of his father at the request of E. Ray Lankester, who admired Henry’s outstanding work as a Natural Historian, illustrator and populariser of aquaria, microscopes and what might be called the study of Nature (I share Lankester’s admiration). The Naturalist of the Sea-shore: the Life of Philip Henry Gosse included a letter written by Edmund to Ray Lankester in which he declared: “No one who reads this book will require to be told that there were many points of vital importance upon which your convictions and those of the subject of this biography were diametrically opposed. Yet you respected him and he admired you, and of all our friends you were the earliest to urge me to undertake this labour of love.” 3 The opposition between the parties refers to Henry’s deeply-held belief in Creation, as described in the Holy Bible.

The first biography, written when Edmund’s step-mother was still alive (Eliza Gosse contributed to the volume in writing “Reminiscences of my husband from 1860 [when they married] to 1888”) was respectful and did not contain the pent-up negative feelings that Edmund harboured and which were expressed later in Father and Son. In The Naturalist of the Sea-shore: the Life of Philip Henry Gosse, Edmund describes Henry as having a severe appearance, with his black hair brushed back from his “large and massive” face, a strong chin, “tightly compressed lips” and large hazel eyes. “His smile was rare, but when it came it was exquisite”.  The severity was partly the result of Henry’s very serious approach to life (he expected the Second Coming at any moment) and partly from his acute shyness and inability to be at ease in company. There are, of course, photographs of Henry Gosse and the cover of the Penguin edition of Father and Son shows a dual portrait of Henry and Edmund taken shortly after Edmund’s mother had died in 1857 and the little family had moved to Torquay. It was the time when they were at their closest, collecting together on the seashore and with Edmund increasingly involved in the Brethren chapel where Henry was the leader of the congregation. 2 There was much affection between the two as they shared their bereavement and started the process of recovery. 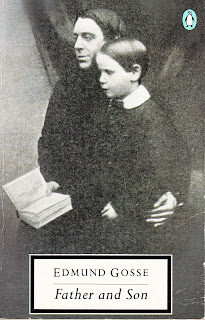 Having described Henry’s appearance in The Naturalist of the Sea-shore: the life of Philip Henry Gosse, Edmund then includes a fascinating footnote: “A very remarkable accidental portrait of my father, as he looked when he was about sixty years of age, exists in the museum at Brussels. Philip [Henry] Gosse might have sat for the man, holding a crimson missal, who kneels in the left-hand wing of the triptych, by Bernard van Orley (No. 40 in the Catalogue), except that the nose is too large and flat. The eyes and mouth, the general form of the face, and the colour of the skin are marvellously identical.” 3 The painting to which Edmund refers is The Haneton Triptych, Haneton being the figure holding the missal, with his seven sons behind him. It is a reverential and highly Catholic work, the wings being on either side of a Pietà, and Edmund would have been very aware of this. Throughout his adult life, Henry Gosse had a strong dislike of Catholicism and being likened to someone holding a missal and gazing on the Pietà would have made him very angry. Of course, we do not know whether Edmund was just drawing our attention to Henry’s likeness in the footnote (13 years after that in the earlier photograph above), or whether he was making an initial foray into the ground covered in Father and Son. I suspect it was the latter and that is why we have to find the work from the clues provided, rather than in an explicit reference. 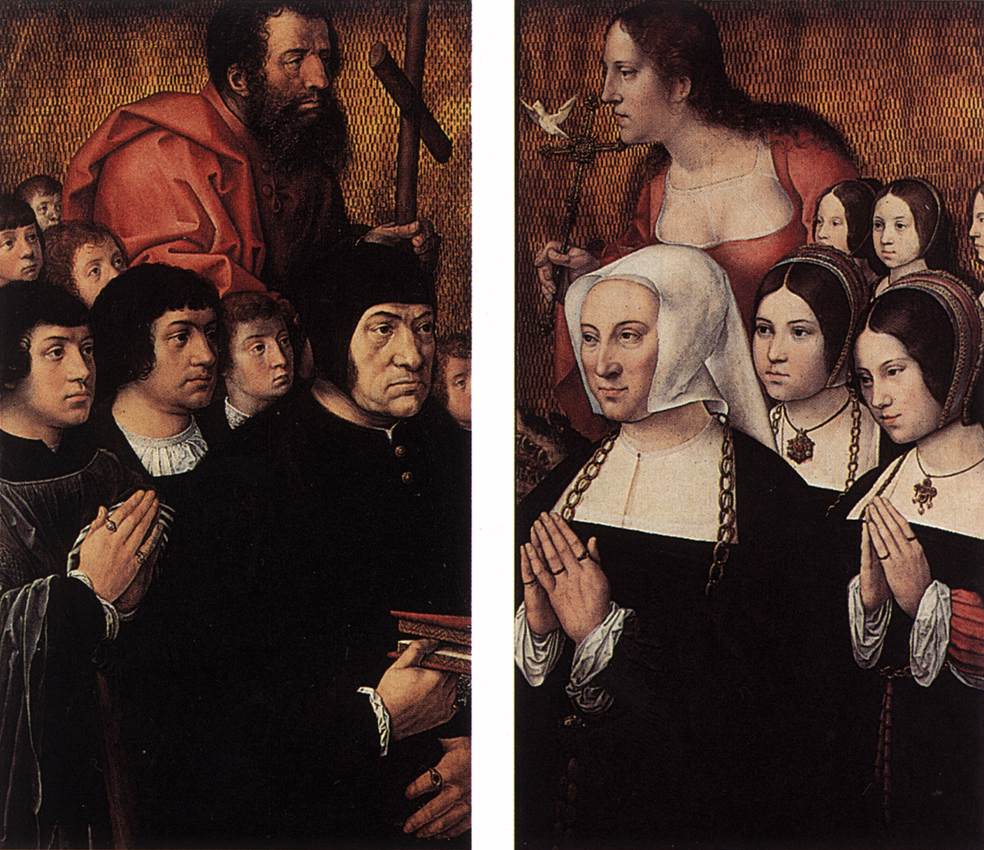 3 Edmund Gosse (1896) The Naturalist of the Sea-Shore: The Life of Philip Henry Gosse. London, Heinemann [First published in 1890]