Given the obvious concern of the public, Lord Dawson, physician to King George V, issued a statement on 20th January 1936 stating that: “The King's life is moving peacefully towards its close”. It is a moving and memorable sentence but the peaceful end was not a natural one as, later that day, Dawson administered two injections which effectively killed the King. One was of morphine and the other of cocaine. Dawson took this step to ensure that an announcement of the King’s death could be made in The Times on the following morning, as this would be considered the best way of breaking the news by the Establishment, a powerful presence, then and now, in British society. For King George V, death would bring an end to his suffering with bronchitis and other lung problems associated with years of heavy smoking, and the actions of Lord Dawson remain the highest profile case of euthanasia in the public domain.

Bertrand Dawson was born in 1864 and studied at University College London where he read for a BSc degree before going on to study medicine. One of his most influential teachers was E. Ray Lankester, with whom Dawson took courses in Zoology and Comparative Anatomy in the academic year 1882-3. 1 Lankester had been re-appointed to his post at UCL earlier in 1882, having accepted the Regius Chair of Natural History at the University of Edinburgh, and then rapidly resigned this prestigious position when he realised that he preferred the academic conditions and way of life he enjoyed in London. Lankester was impeccably connected and had the facility to make friends across a wide spectrum - Karl Marx, Anna Pavlova, Sir Henry Wood, Sir Edmund Gosse - and many other leaders of the Establishment of the time. He also had many excellent contacts within science, acquired initially from his father’s network (as we would call it now), but then from his own circle, and he was a man of enthusiasm and presence, unafraid of taking a stand for things be believed in. 2 Lankester must have made a strong impression on Dawson and probably encouraged him in his studies leading to medicine - he was a strong believer in “Medicine and Economic Zoology” - and his ease, and contacts, in Society would also have impressed the young man.

Throughout his life, Lankester preferred to be called a Naturalist, as this “linked him to his father’s friends” like Henfrey, Hooker, Owen and [Philip Henry] Gosse. 3 In contrast to the devout and immovable Christian beliefs of the latter, his view was that “Christianity was a compound of two things; a system of morality approved by the united conscience of civilised man, and a fantastic mythology”. 3 Typical of the man, this difference did not deflect from profound respect for Gosse’s achievements. 4 Lankester died aged 82, on 15th August 1929, during the last years of the reign of King George V and we have a marvellous painting made months before he died. 5 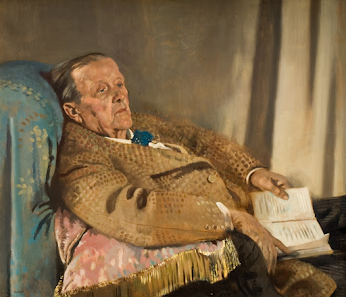 Gone is the energetic and powerful figure of most of his adult life and the description given by Lester and Bowler of the picture sums up Lankester’s sad condition: 3 “Early in 1929 [or was it late 1928?] Sir William Orpen painted a portrait of Lankester that attracted much attention at the Academy exhibition. Wearing a brown tweed jacket, Lankester holds an open book and reclines on a couch. There is great knowledge and great weariness in the lined face.” The latter sentence would fit equally well to the late self-portraits by Rembrandt and the loss of faculties and the feeling of slipping towards death is something, accidents excepted, that we all face. Artists sum it up so well.

3 Lester, J and Bowler, P.J. (1995) E. Ray Lankester and the Making of Modern British Biology. British Society for the History of Science Monograph 9.

5 This image is reproduced courtesy of the Birmingham Museums Trust