Why does the Comma have a comma?

Buddleia bushes are flowering in our garden and I love their rich scent. It’s not only me that is attracted to the plants, as their dark purple flower spikes are visited by large numbers of bees and butterflies that collect the supplies of nectar provided by the plants. The Buddleia benefits, as pollen is spread by the insects when they gather this “gift”, and the bees and butterflies gain fuel for flight and a high-energy source of food for rearing young in bees. Both groups of insects also use the sugars in nectar as a store; with bees producing honey and butterflies body fat. 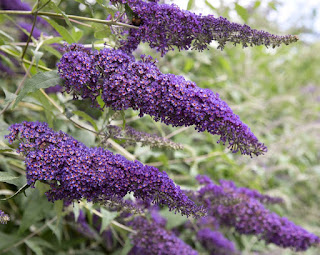 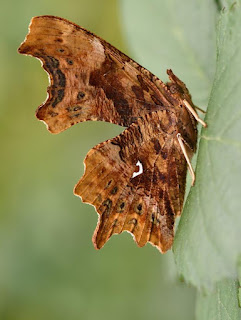 As the insects move over the flower spikes, it is easy to look at them closely and the common Peacock and White butterflies have been joined by Commas (Polygonia c-album), which seem plentiful this year. The wings of Commas have a jagged profile and, as with most butterflies, have beautiful colouration on the upper surface of the wings and a brown colour on the under surface, with a pattern resembling bark or lichen. The ragged outline of the wings, and the patterns of their lower surface, are likely to provide protection against predation during rest, when the wings are closed. The butterflies are then camouflaged and look to me like pieces of bark or dead leaves. I say “look to me”, as our perceptions are so much governed by our own senses and we do not know how the butterflies look to their natural predators. We know that the Comma is eaten by birds like great tits,1 but presumably in greater numbers when the wings are open and the butterflies active.
A feature of the camouflage of the under surface of the wings is the “comma” from which these butterflies gain their common name. The marking varies from species to species, and also within species, but it is a feature of Comma butterflies throughout the Northern Hemisphere. Why do they have this marking? A creationist might argue that it is something for which only God has the answer and, without wanting to sound facetious, creationists may also feel that God created the comma as a talking point and as a means of showing us His omnipotence. An evolutionist would have no difficulty pointing to the selection of mutations that provide the effective camouflage of the under surface of the wings, as the colouration presumably enhances the survival of individuals in which it occurred. The mutations require changes in the pigmentation of individual scales and also of the wing outline, but what were the stages that led to the forms we see today? Does the comma provide any selective advantage, or is it neutral? No-one knows the answers to these questions, nor do we know why the upper surfaces of the wings have their characteristic brightly-coloured patterns. Unfortunately, we are hampered in our inquiry by viewing Nature with human sense organs and from a human perspective. Of course, it’s the only approach we have and that is always worth keeping in mind, especially as humans are so recent in the history of living organisms.