We obtained our first television set in 1959. It was rented (a common practice then, as TVs were so expensive) and received only the single BBC channel in black and white. As having our own TV was a novelty, I loved watching programmes on wildlife and sport, and sometimes those of a different kind caught my interest. It was through his excellent series of vignettes for the BBC that I first encountered John Betjeman. I knew nothing about him and his background, but I liked the way he described the places he visited, whether towns and villages, churches, or railway lines. As I was an enthusiastic train spotter at the time, it might be expected that it was this interest that drew me to Betjeman’s television work, but it was everything that he did. I learned about architecture, about how the arrangement of buildings in towns and villages was often haphazard, about the exteriors and interiors of churches, about so many things that caused me to look at my surroundings with a bit more insight. I was also attracted by Betjeman’s campaigning for buildings he felt strongly about, like St Pancras Station and the adjoining Midland Grand Hotel, efforts commemorated by Martin Jennings’ wonderful statue on the concourse of the restored station. 1 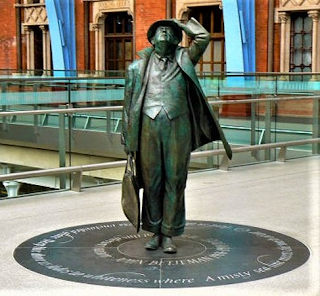 An important part of the “TV Betjeman” was his appearance, with rumpled suit, jacket or coat, a battered hat, and a range of deliberate affectations. I loved the eccentric persona, but the magic came from the way he used, and delivered, words. He conveyed nostalgia, a love of the past and the need for preservation, all described in a way that made it easy to be carried along. Take a look at this clip and you will see what I mean: https://www.youtube.com/watch?v=dDrQkg8lOGc&t=52s&ab_channel=THERESALWAYSSOMEONE
At the time I saw his TV programmes, I didn’t know that John Betjeman was a poet. I have always found poetry difficult, as it usually requires more concentration than I can muster, but Betjeman’s work is different. It is so accessible and has a lightness of touch. He has a way of describing feelings and anxieties, often couched in humour, that expose his vulnerabilities. Nowhere is this more true than in Summoned by Bells, the verse autobiography of his early years published when he was 54 years old. I have the version illustrated by Hugh Casson that gives two great artists for the price of one 2 and, each time I read it, I can recall John Betjeman’s characteristic delivery; the same method of delivery that drew me to his TV programmes when I was a boy.

Nostalgia for things past often comes with apprehension about the future and that was certainly true of Betjeman, especially as he neared the end of his life. If I had to pick a favourite poem, it would be “The Last Laugh” on the final page of A Nip in the Air (itself a memorable title for a last anthology): 3

I made hay while the sun shone,
My work sold.
Now, if the harvest is over
And the world cold,
Give me the bonus of laughter
As I lose hold.

By coincidence, this poem is used by Bevis Hillier, the official biographer of Betjeman, to close his book John Betjeman: A Life in Pictures 4 and I suspect that all who read it are affected by its sadness.