Sir Edward Elgar did not follow conventional religious practices and his biographer, Michael Kennedy [1], remarks that:

He expressed a wish that he should be buried at the confluence of Severn and Teme, without religious ceremony. He had for many years avoided going to church and while dying and still lucid refused to see a priest.

Raised a Roman Catholic, Elgar certainly knew well the concept of soul – it is no wonder that Cardinal Newman's poem The Dream of Gerontius had such an attraction for him, forming the basis of one of his greatest compositions. He was a complex man and his music reflected that, extending from State ceremonial, through religious oratorio, to the pastoral. It is the reflective, soulful Elgar that has always had the most appeal for me and his source of inspiration came from his feelings for people and a passion for landscape and the natural world. His loyal friend, W. H. (Billy) Reed [2] tells us of visits to Elgar:

Elgar was intensely fond of the country. Like William Morris, he was in love with the earth. He seemed to know every inch of Worcestershire (his own county), Herefordshire and the Malverns, Gloucestershire, and the Severn and Wye Rivers. He never tired of talking of them, exploring and re-exploring them if only to see again all the things he knew to be there; and his great joy was to have a kindred spirit with him to share in these pleasures, and to see his own joy reflected in the face of another.

Reed was the leader of the London Symphony Orchestra and provides us with another insight into the inner Elgar when he wrote:

I remember once when we were rehearsing the First Symphony, and the passage at Fig. 66 in the second movement was being played in too matter-of-fact a manner to please him, he stopped and said, "Don't play it like that: play it like" – then he hesitated, and added under his breath before he could stop himself – "like something we hear down by the river"..

It is soul – an inner self, moulded by emotional wounds and triumphs – that Elgar portrays so well in his music. Some people listening to pieces such as Sospiri or the Violin Concerto will be unmoved and find them rather slow and meaningless, but, for me, these pieces cut through everyday things into something much deeper. Here are recordings of the two:

Reed was valuable as a technical adviser and indispensible as a warm-hearted companion, his sympathy, wit, and gay charm being antidotal to Elgar's frequent melancholy.

A photograph of the two men in later years is shown below (from the cover of Reed's book) and something of their relationship comes across in it. Reed was the dedicatee of Sospiri and this was a wonderful gesture by Elgar, reflecting the help that Reed had given the composer four years earlier. 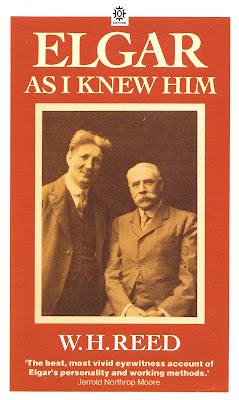 On the manuscript of the Violin Concerto is written "Aquí está encerrada el alma de ....." (Herein is enshrined the soul of .....), something that has engaged many Elgar scholars, in attempting to identify the person represented by "....." Not being a scholar, I have nothing to add there. What is clear, however, is that the piece does contain what Elgar himself described as his "insidest inside" [1,3]. He was pleased with the Violin Concerto and, during its composition, wrote to a friend [3]:

I have the Concerto well in hand & have played (?) it thro' on the p.f. & it's good! awfully emotional! too emotional but I love it..

I do not get an affecting and moving response when I see the notes of Sospiri or the Violin Concerto written down – I have to hear them (they are music after all). At the risk of trivialising the wonderful sensations that result from listening to the pieces, I wonder how the music would be interpreted by a neuroscientist? Firstly, each instrument in the orchestra is creating sound waves and the complex of sounds is transmitted through the air to be picked up by the ears of the listener, then passing down the auditory canals to vibrate the eardrums and the small bones of the middle ear. The complex of sounds is then translated into electrochemical signals that pass along the auditory nerve to the brain where they are interpreted. Recent studies indicate that there is a special area of the brain that is used to process signals that are generated by music [4], but this is only part of the story. Once received, the signals produce responses in other parts of the brain dealing with pleasure, memory and a host of other activities related to soul. 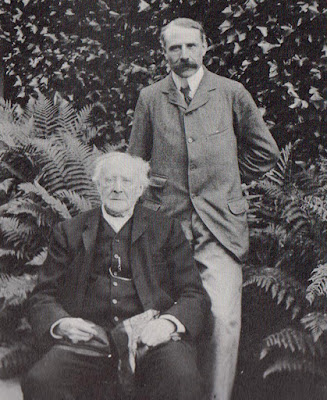 In closing, I would like to return to Elgar the man rather than the composer, although both are, of course, interlinked. Above is a picture of Elgar shortly after he had cycled over to his father's home (Mr Elgar was, by then, a widower, living with his daughter, Polly). The composer had just learned of his Knighthood and the reaction of old Mr Elgar also expresses a very special kind of emotion; the handkerchief being used for much blowing of the nose and mopping of the eyes. Elgar stands behind him in "nobilmente" pose, showing a very different part of his soul from that which generated Sospiri and the Violin Concerto. He would no doubt been impressed by the extraordinary achievements of contemporary neuroscience (he was an enthusiast for both chemistry and technology), even though its findings only lead to a rudimentary understanding of the complexities of musical appreciation. If we ever understand the neuroscience of soul, and I doubt that we will, the next question would be: how did soul evolve?