Part of a space rocket has been recovered from the Atlantic Ocean near the Scilly Isles. It was from a launch vehicle carrying cargo to the International Space Station and large chunks fell to Earth after the rocket exploded [1]. The pieces that were recovered had coverings of goose barnacles (above and also below left) and those with a very fanciful imagination may conclude that these were carried back to Earth from somewhere in the planet's atmosphere, or beyond. However, the story of their colonisation is not the stuff of science fiction, but nonetheless fascinating. 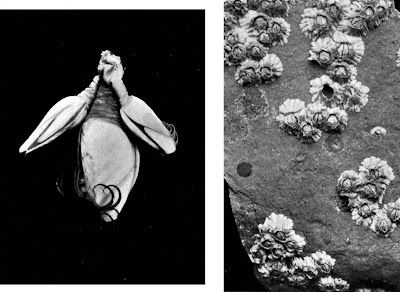 We are all familiar with acorn barnacles (above right) from our walks along coasts. Millions of the crustaceans coat the surface of rocks, often giving them a creamy-white appearance, but fewer people have seen their relatives, the stalked goose barnacles, like those found on the pieces of space rocket. They can be seen on many shores during low spring tides and they are familiar to those who own boats and ships, where their presence causes a reduction in performance, so that hulls need to be cleaned of barnacles from time to time. To prevent such colonisation, the hull may be treated with anti-fouling paints containing metals that deter the attachment of barnacles, or even have a covering of copper sheets that fulfils the same purpose. The latter was a feature of the fastest tea clipper ships. 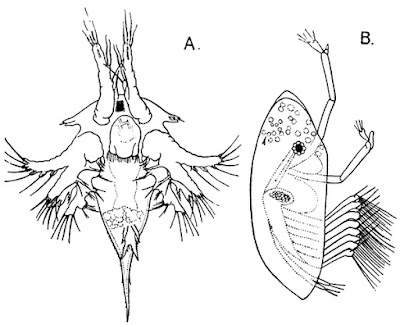 Barnacles do not colonise surfaces as adults, but as larvae. The adults are hermaphrodite and shed both sperm and eggs into the sea where fertilisation occurs. The first stage larva that hatches from the fertilised egg is called a nauplius (A, above) and this transforms into a cypris larvae (B, above). Both stages are free-swimming and are carried by currents, often very far from the adults that produced them. The oceans contain enormous numbers of larval stages of many familiar creatures, in addition to barnacle larvae, yet most of us would be hard pressed to identify them as they are so unlike the adults. Limbs are used both for locomotion and feeding and barnacle larvae capture tiny particles of various kinds that are then passed to the mouthparts and swallowed.

If cypris larvae are washed on to a shore, or to any other solid surface, a remarkable series of events takes place. The first is that the larva cements itself to the substratum (different types of adhesive being used across the spectrum of barnacle taxa [2]) and calcareous plates are secreted to begin the process of conversion to the familiar adult form. The process of transformation has been described by Calman [3]:

..after a series of nauplius stages the larva passes suddenly, at a single moult, into a stage in which the body and limbs are enclosed in a bivalved shell.. ..this is known as the cypris stage. Through the valves of the shell a large pair of compounds eyes can be seen, as well as six pairs of two-branched swimming feet, while in front a pair of antennules projects between the valves. On each antennule is a sucker-like disc by means of which the larva, after swimming freely for some time, attaches itself to a stone or some other object, where it remains fixed for the rest of its life. A cementing substance produced by a gland at the base of the antennules attaches the front part of the head firmly to the support; the valves of the shell are cast off, and replaced by rudimentary valves of the adult shell; the six pairs of swimming feet grow out into tendril-like cirri; the compound eyes disappear, and the animal assumes the structure of the adult.

Acorn barnacles and goose barnacles feed using the cirri on their legs, these limbs no longer being required for swimming. Acorn barnacles use the legs to sweep the cirri through an aperture between the shell plates and captured particles of a wide variety are then transferred to the mouthparts, in a similar way to that employed by the larvae. In goose barnacles, the cirri are static, or nearly so, and feeding is from currents or, in the case of moving objects, the water that passes over them. Unlike their smaller relatives, goose barnacles also capture small planktonic animals and the cirri close around these to prevent their escape. To enhance access to currents, goose barnacles have developed a peduncle, or stalk, that is muscular and covered with a strong cuticle. It grows intermittently [4] and those familiar with the cuisine of Portugal will know the structure well after eating a plateful of percebes (see recipe here [5]) and below a video from Gordon Ramsay: 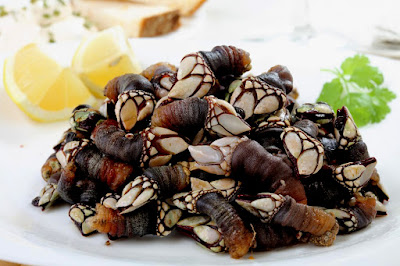 Goose barnacles are not able to exist for long out of water but acorn barnacles certainly can, as they have calcareous plates that close off the aperture of the "shell" when the cirri are withdrawn. That is why we see them so readily on the shore when the tide is out. Some forms are so high on the shore that they only become submerged at the highest tides, remaining exposed to the air for days, showing how effective the closing plates are at preventing water loss. Altogether, barnacles are most remarkable animals and it is little wonder that they so intrigued Charles Darwin [6].