Where is Biology heading?


Nearly 20 years ago, I attended a reception for Francis Crick, after he had given a lecture at UCL on consciousness in animals. There was no opportunity for a conversation, but, like everyone else in the room, I was aware that this was Crick of Watson and Crick, who, with Wilkins and Franklin, were responsible one of the most important discoveries in Biology – the structure of DNA. There was a feeling of awe that here was someone whose name would go down in history, alongside Darwin, Newton and a few others. 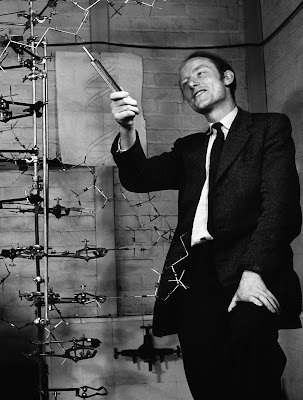 Since the discovery of DNA, we have found ways of cutting DNA strands, so that we can not only identify what each gene codes, but also manipulate the genetic material of an individual to change gene expression. The recent development of CRISPR brings a cheap and readily available technique for changing the genetics of organisms, something that excites both scientists and the media [1].

As we find out more and more about which genes code which chemicals, we also discover how these affect biological processes within the body. The eventual aim is to be able to understand how life functions as an immensely complicated series of chemical reactions. Computers provide a means of storing all the information that we acquire about each gene, and computing power enables us to model the possible interactions of chemicals. Many studies are required to gain information and these form the basis of research projects that are routine and, dare I say it, dull.

Recently, I received an e-mail from someone advertising a talk at a leading University in the UK. It said:

X is a very exciting speaker with a very refreshing perspective on cell biology. It goes well beyond the standard approach of spending 4 years studying one modification on one variant of one protein in one type of tissue culture cell.

That, surely, is almost a definition of something dull and it is clear that the purpose of all these investigations is to train students in the use of techniques to gain information that forms a tiny part of a giant jigsaw. There is no knowing whether we will ever be able to complete the jigsaw and it will certainly not answer questions about thought processes, aesthetics and what drives emotions. We might discover the components of individuals, but will we have any clue as to how those individuals live, especially as only a small proportion of the total DNA appears to be "used" [2]?  There are those that think that it will, and the media also build expectancy, and show little restraint, in reporting each discovery that may lead to eradicating a disease, or transformation of a farm animal, or food crop. Scientists go along with this because they like the publicity and it aids recognition of their work, perhaps enhancing the chance of success in the next round of grant awards.

Taking a step back, what is happening to Biology as a result of the revolution in genetics? Certainly there have been great discoveries, with more to come, but there is also a large amount of humdrum recording for the jigsaw puzzle. The Biology that so entranced me, based on Natural History and the environment, is becoming lost in the worlds of chemistry, physics and mathematics. Perhaps I should just move with the times?

During my research career I looked largely at populations of insects and the way that they transformed organic matter. It could loosely be categorised as Ecology but that subject, too, has become dominated by deterministic approaches and models. For example, one set of models that has been developed over many years explains the interaction of predators and prey, and the way they affect each other's population density. Having conducted some experiments, I found that some predators killed more prey than others and only ate some, and this wasn't the result of a difference in life stage or in anything else I could measure. Now, where do these killers fit into a model that treats all predators as being equal? Clearly there is a need to allow some variable, or stochastic, component that makes the solution of the models much more complex, but brings them closer to the real situation.

I think Biology has passed a crossroads. I don't join in all the excitement over determinism and can even see that it might lead to a new Dark Ages where we cease to question. In an earlier Dark Age in Christian Europe, we were constrained by a belief system, while Islamic scholars were encouraged to acquire knowledge and use it in advancing ideas. During the time of Al-Mamun, there was great respect for knowledge of all types [3] and it was accorded high status: blue-sky research was a means of advancing human achievement, quite unlike the way it is currently regarded as the poor relation of technology and applied science. Of course, the deterministic approach of Biomedicine is invaluable in proving us with novel treatments that are beneficial, but we must recognise that most biomedical research programmes only produce small pieces of jigsaw and they might not even be doing that. How much better to have a balance, with a return to the excitement of Natural History that so marked the Nineteenth Century, with the discoveries of Charles Darwin and others? These Natural Historians knew that we are dealing with a great deal of complexity and were filled with awe at just how complex the World seems. They probably knew that we would never get as many answers as we would questions.

In supporting a return to Natural History, I am not advocating only the study of plants and animals, but also of the extraordinary world of single-celled organisms. We have the tools to make many new discoveries across a wide range of environments; from hostile regions of land masses through to the deep oceans. Discoveries that enhance our knowledge of the World we live in and not just those that are perceived as being potentially useful, or threatening, to humans. Natural History, like the Arts, brings pleasure and purpose to life and that is as important as all the advances in Biomedicine.