The Hay Wain is John Constable's best-known painting and most of us are familiar with Snow Storm: Steam-Boat off a Harbour's Mouth [short title Snow Storm] by J.M.W.Turner. The pictures create quite different emotional responses in the viewer and we can easily imagine how the scenes might change with time. Looking at each of the paintings in more detail: 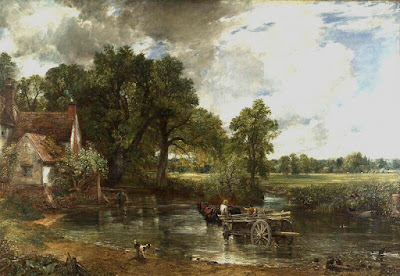 The Hay Wain (above)

A cart (wain) has been driven into a shallow river, perhaps for the horses to drink. A spaniel tries to attract the attention of the farm workers and, while there are dark clouds, there is only a chance of rain. The atmosphere is benign and many would take it to be their idea of a natural rural idyll, yet much of what we see is anthropogenic. Apart from the cart, there is a building, a separate artificial channel for the river, a boat, domesticated animals, and a field used for growing hay.

The field is part of the floodplain of the river and it is easy to see that flooding could still occur (it might even be encouraged to enhance the growth of grasses). The river would not be wadeable at that time and, indeed, it would be dangerous to enter the water. Imagine the same scene in February, on a day when strong easterly winds are blowing and the temperature is near freezing. The atmosphere would be very different to the comfortable one that Constable projects in his painting. 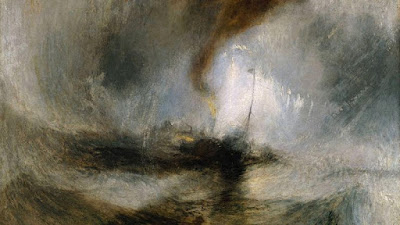 Snow Storm: Steam-Boat off a Harbour's Mouth (above)

There is no comfort here and the roughness of the sea, together with the white-out conditions of the blizzard, are a potential danger to life. There is only one anthropogenic subject – the paddle steamer angled in the rough sea – and the swirling smoke from the stack, together with the bend in the mast, highlight the power of Nature as a destructive force. Added to that, we know from the long title of the painting that the steamer was trying to enter harbour and safety.

Now imagine the same scene on a different day, perhaps a similar one to that of The Hay Wain. There would then be little threat and the deck would be a pleasant place to sit and look out over the calm sea and the passing coast.

The two paintings certainly represent two aspects of Nature: the one warm, comforting and familiar; the other frightening and isolating. Most would agree that these paintings are easily recognisable as being by Constable and Turner, respectively, although Turner, produced a huge, and varied, collection of landscape art. The Hay Wain dates from 1821, when Constable was 45 years old, and Snow Storm from 1842, when Turner was 67 years old. The two artists have been discussed widely and, recently, I read an essay by Ronald Rees that appeared in The Geographical Review of 1982 [1]. Rees makes the following comments:

Constable decided to paint only landscapes that he knew and to rely as much as possible on direct observation.. ..Place was not important to Turner.. ..As a painter he needed not familiar places but locations where he could observe the interplay of his favorite phenomena: water, mist, and sunlight.. .. Occupied with essences rather than appearances and universals, not particulars, Turner presented nature as a system of mysterious and often threatening cosmic energies. Constable's view of nature was more optimistic and more comprehensible that Turner's.. .. Its manifestations were a genuine love of nature and a consciousness that human beings are diminished if they weaken the binding connection to the world of real and natural things.

The warmth of a summer day in a water meadow provides a quite different feeling to being out on a rough sea in a howling winter gale, yet both make us realise that being in Nature is a positive experience, albeit with occasional discomfort. Respect for the power of natural forces on the one hand (as seen in Snow Storm) counteracts the sense of our being able to control Nature (as in the many anthropogenic references in The Hay Wain). Turner and Constable were thus interested in the extremes that we find in the "world of real and natural things", although we can add that the threatening powers of Nature that we see today are nothing compared to those that have occurred in earlier geological time periods. Although we have a good understanding of natural forces, our ability to control Nature is not a given and that applies to both non-living, and living, threats. They are always going to challenge us and days like those shown in The Hay Wain are never going to be part of a constant idyll, just as rough seas will be followed by calm.