In my last blog post, I wrote an appreciation of limpets and the extraordinary adaptations that they show for life on rocky marine shores [1]. As I pointed out, that should not prevent us from using these molluscs as a source of food and that is something that fits with contemporary debates about sustainability and the need for animal protein. We are now much less resourceful than our ancestors, and are dependent on what is available in stores or on market stalls, with the latter often showing a more local approach than the former.

To gain an historical perspective on eating limpets, I read Lovell's The Edible Molluscs of Great Britain and Ireland with Recipes for cooking them [2] and he describes their consumption by some communities:

"In many places limpets are used for food, especially on the Continent, where they are oftener eaten than the periwinkle. At Naples they make them into soup, and I am told it is an excellent dish.. ..The poorer classes at Eastbourne eat them constantly.. ..At Plymouth they gather great numbers of them, especially from the breakwater, as well as in the Isle of Man, where they are known by the name of "flitters"; and in Scotland the juice of these shellfishes is mixed with oatmeal.."

In addition to this background information, Lovell also gives recipes [2]:

"Limpet Soup – Wash them, and free the shells from seaweeds etc.; put them into a saucepan and parboil them. Take them out of the shells; chop up some parsley, and put it, with a tablespoonful of oil, or an ounce of lard or butter, into a saucepan, and fry until it becomes brown. Add a pint of water, and, when boiling, throw in the limpets, with a teaspoonful of anchovy sauce, some pepper, and boil again for half an hour; or, if preferred, stew them before putting them into the soup.

Limpet sauce – Choose clean-shelled limpets, not covered with barnacles, steep them in fresh water, and then heat them in a close covered saucepan until they part easily from the shells. They yield a rich brown liquor, in which, after being shelled, they may be stewed for half an hour. Thicken the liquor with butter and flour; strain and season with pepper, cayenne, and salt, and a slight flavouring of lemon-juice or vinegar. The limpets, being tough and indigestible, are not returned into the sauce."

The latter comment reminds us of the common failing of over-cooking seafood of all kinds, something that one learns by trial and error.

Lovell [2] also gives a more rustic approach to cooking limpets, originating from the island of Herm in the Channel Islands, and reported by Jeffreys in Volume 3 of his British Conchology:

"Roasted limpets - The limpets were placed on the ground, and laid in their usual position, and cooked by being covered with a heap of straw, which had been set on fire, about twenty minutes before dinner."

To these recipes can be added others from different parts of the World (illustrations of each dish are given, with the URL to the web page for each recipe): 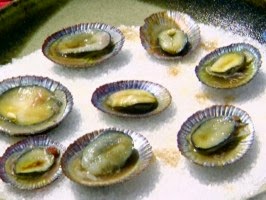 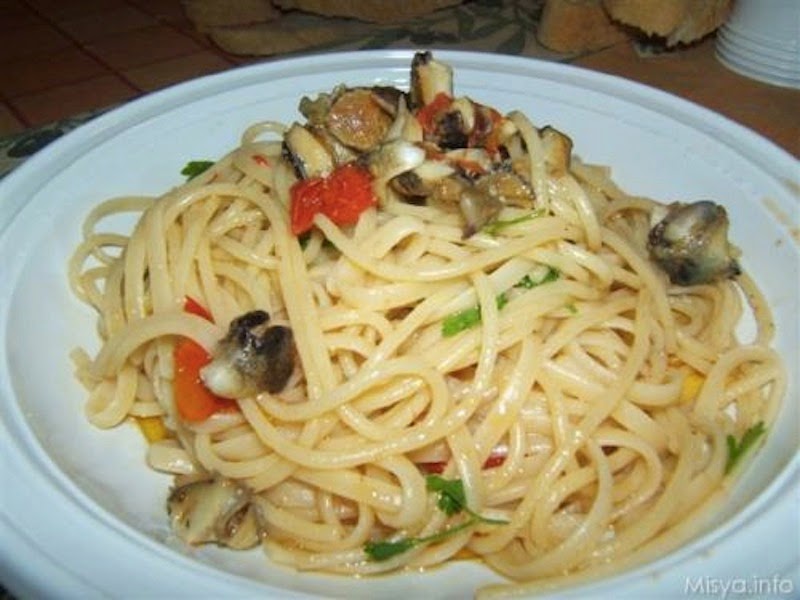 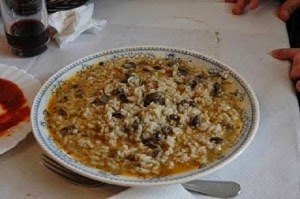 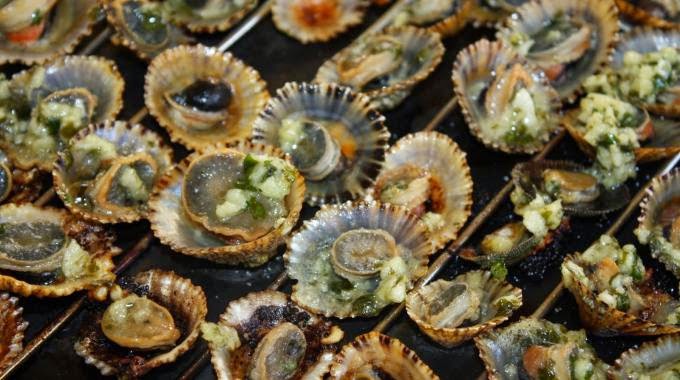 It is only possible to eat limpets as a regular part of the diet if one lives at, or near, the coast. For those who are landlocked, Lovell guides us to Garden Snails, together with their close relatives, including the Roman, or Vine, Snail (and who doesn't like Escargots à la Bourguinonne?). Limpets and land snails are both sustainable foods and provide good sources of animal protein. Although I don't feel comfortable about roasting them alive, placing the molluscs in boiling water kills them rapidly and they can also be kept in a deep freeze for a short time to reduce their metabolism severely before they are cooked.

Mark Zuckerberg became famous not only for Facebook, but also for his statement that killing animals oneself is better than willingly being ignorant of how we obtain the meat we buy from butchers or supermarkets [3]. For those that would like to follow Mr Zuckerberg's example, but cannot face the prospect of cutting the throat of a pig or a goat, killing snails of various kinds provides rather less of a challenge.

[2] M. S. Lovell (1867) The Edible Molluscs of Great Britain and Ireland with Recipes for cooking them. London, Reeve & Co.